The Chant of Jimmie Blacksmith Review

Aboriginal and Torres Strait Islanders are warned that this post may contain images of deceased persons.

There is nothing more unsettling about the film The Chant of Jimmie Blacksmith than the fact that it’s still a wholly relevant film. This haunting essay of racial issues in colonial Australia focuses on the true story of Aboriginal Jimmie Blacksmith (Tommy Lewis), a man who is trying to start a life for himself yet is continually brought down by the men who feign to provide him opportunities. Directed by Fred Schepisi, this is a unique entry into the pantheon of great Australian cinema.

One of the most powerful elements of cinema is its ability to hold a mirror up to society and force it to assess its heritage and what built the foundations it stands on. Australian history is one that is rarely explored on screen – sure, we have many renditions of the Ned Kelly legend, but the traumatic origins of white Australia doesn’t exactly make for box office gold, especially when we have aspects of society refusing to believe that Australia was invaded rather than ‘discovered’ by Captain James Cook. It’s this stone cold look at how Australia looks at the impact of white civilisation on Aboriginal cultures that cements The Chant of Jimmie Blacksmith as a powerful film.

Jimmie is an aboriginal man who tries to make a life for himself – one that is based on the lives that the white people that surround him. He’s simply trying to gain the same life that many white people have, and he’s taking the steps and opportunities that are provided to these white people to help further himself. Jimmie’s heritage includes having a white parent, and due to this the way he is treated is as if the white people he works for can drag the aboriginal out of him so that only white remains.

This is a film of two halves – the demonisation and repeated severe intolerance that Jimmie (and his family) receives, followed by his retribution on those that enact that intolerance upon him. It’s this separation between the two distinct sides of Jimmie – the victim and then the aggressor – that creates the most interesting discussion. One could watch The Chant of Jimmie Blacksmith and feel anger at the way Jimmie is treated in the first hour, yet at the same time feel joy whenever he manages to make a step forward in his life, no matter how small it may appear. However, on the flip side, one could watch this film and feel similar anger at the way Jimmie retaliates in the second half with explosive violence that is full of complete disregard for man, woman and child.

What makes The Chant of Jimmie Blacksmith such a timeless film is the way it addresses racism head on. Arguments against people of colour often focus on the level of opportunity that is provided to them in life, with some people saying ‘they’ve got the same opportunities as white people, they don’t need a handout’ – The Chant of Jimmie Blacksmith tackles that distorted logic head on as Jimmie is repeatedly smacked down for simply trying to obtain the same opportunities that many white people take for granted. Things like equal pay or a reference for doing a good job is scoffed at and rejected for illogical reasons, making Jimmie’s plight worse as it goes along.

Tommy Lewis’ portrayal of Jimmie Blacksmith is a truly devastating one. In what was his first screen role, Lewis captures a Jimmie’s eagerness and earnest nature wonderfully, yet at the same time manages to capture the anger and need to seek retribution for what has happened to him. This is even more important given that one of the films major weaknesses is its random way of revealing its narrative with characters flitting in and out of the story without rhyme or reason. An unfair comparison might be of the latter films like Forrest Gump or Boyhood which both employed narratives that held a main character as its throughline whilst throwing in side characters at will.

The way Schepisi throws Jimmie into various different scenarios is fine and impactful for the most part, but does take the viewer a moment or three to catch what the next plot point is. At one point Jimmie is planting a fence line round a property, then the next he’s working for the army and attacking other aboriginals on horseback. These scenes are devastating, but unfortunately there is a slight loss of impact when we’re not always entirely sure how Jimmie has ended up in this situation. That’s not to say that the situation itself doesn’t help further Jimmie’s plight, it’s just that sometimes the situation lacks context to make it just that little bit more powerful.

The actions taken against Jimmie reach breaking point when the lady he’s married, Gilda Marshall (Angela Punch McGregor), due to her becoming pregnant with their possible child, is revealed to in fact have given birth to a pure white child – making Jimmie not the father, but unfortunately a perceived stooge who believed that the child could be his. Jimmie being the noble person that he is though agrees to care and love for the child as if it were his own – that is, up until he’s disallowed payment for the work he has done for the property owners, and thus unable to feed his family. These are basic rights that people should be provided, so Jimmie’s violent retaliation is understandable, although excessive.

It’s here that the mirror is again held up to society with the way that Jimmie is treated for his acts of violence. Naturally, the brutal actions that he takes do deserve to be brought to justice, however the reasoning behind his actions provide context for them and thus make the subsequent killing spree understandable. After all, after years of horrendous actions against Jimmie and his search for acceptance as a human, it’s logical that one would retaliate the way that Jimmie did. Unfortunately, the second half of the film does stretch out to an almost unbearable length where person after person is brutally killed in pursuit of justice. When Jimmie is finally captured in the one of the most European of institutions – a convent – we as the audience feel as exhausted as he has from running around the countryside escaping capture. This extended ‘chase’ doesn’t lessen the impact of Jimmie’s story, rather instead it does help bring focus back to the main issue at hand – that of white guilt and the role that white Australia has regarding the treatment of the traditional owners of this land of ours.

We cannot close our eyes to this history and we cannot shy away from the devastating foundations that Australia was birthed upon. The Chant of Jimmie Blacksmith forces us to look at our own history – and in many ways, many other countries similar history – and question who we are as people and how we came to be where we are. The mere fact that a film about intolerance to people of colour from 1978 is as relevant now as it was then is saddening as it shows how far we still have to come as a society.

It’s also telling of the society that existed in 1978 as the then AFI (Australian Film Institute – now AACTA) nominated The Chant of Jimmie Blacksmith in most categories, yet, in a case of #AFISoWhite, failed to nominate the titular character and the actor who portrayed him in any capacity. Angela Punch McGregor walked away with the Best Actress award for her role as Jimmie’s wife Gilda Marshall – a performance which is wonderfully nuanced in her naïve portrayal as someone who genuinely loves Jimmie. Gilda is someone who can relate to Jimmie on some level as she too is not afforded the same luxuries of upper white class people due to either not being born into wealth or fortune, and instead born into a life of being a maid. The role of Farrell won actor Ray Barrett the Best Supporting Actor award. Barrett gives a stellar performance which works to display part of the reasoning for Jimmie’s retaliation. One shouldn’t be angry at the lack of award recognition for Tommy Lewis, especially given the other acclaim that the film received (more on that in a moment), but given the superb natural performance he gives here, it would have been great to see him cemented in history as winning an award for his role here. 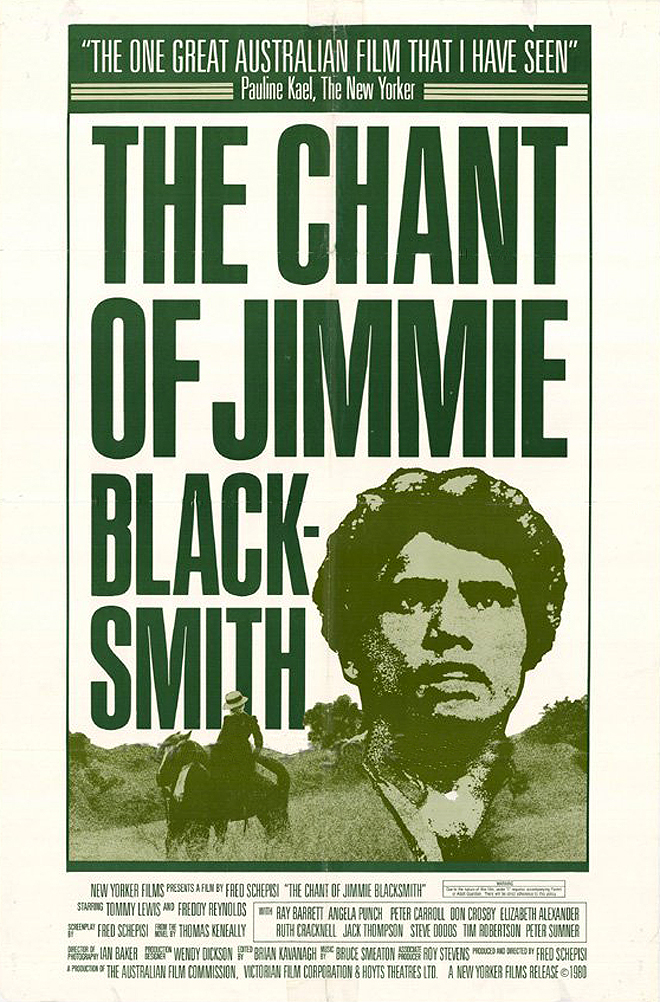 The other notable acclaim the film received was from film critic Pauline Kael who announced The Chant of Jimmie Blacksmith as the finest Australian film she had seen. On top of this, the film was also the first Australian film to be granted entry into the Official Competition at the Cannes Film Festival in 1978.

Australian cinema has often shied away from telling the story of the countries inception and the subsequent treatment of the traditional owners of the land. Through films like The Chant of Jimmie Blacksmith we are given a scorching look at the real life treatment of aboriginals and through this stark display of violence from white Australia, we are forced to ask ourselves whether this is a history we are comfortable with being part of, and if we aren’t then what will we, as fellow citizens, do to help ensure that this does not occur again? We still seem to be a long way off answering that question, but through cinema like this we are forced to find that answer within ourselves.