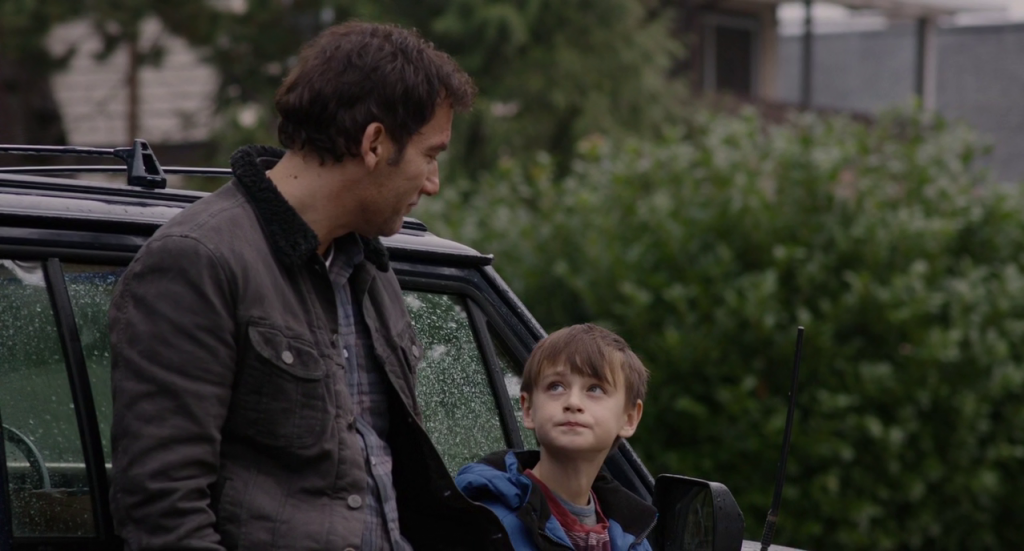 It’s understandable, given today’s difficult social climate, that people would turn to religion at times of need and assistance. With wars raging on in the world, unemployment and inequality increasing at rapid rates, small towns slowly dying due to various reasons; it’s no doubt that people seek out hope in whatever manner they can. Bob Nelson’s The Confirmation takes a look at the way of the world through the eyes of a young boy – Jaeden Lieberher’s Anthony – as he spends a weekend with his father, Walt (Clive Owen).

As with Bob Nelson’s last film, Nebraska, (he was the writer), this is a road trip movie of sorts. Rather than taking in a grand journey across America, we follow Walt and Anthony through their small town as they search for the thief who stole Walt’s toolbox. Divorced from Anthony’s mother Bonnie (Maria Bello), Walt is given the responsibility to care for Anthony while Bonnie and her partner Kyle (Matthew Modine) go away to a Catholic retreat for the weekend. Single life isn’t the only problem Walt is facing – he’s also unemployed (or, as he says, he’s a ‘freelancer’), and is a recovering alcoholic, oh and he’s just about to be evicted from his house as well.

The subject of religion can be a pretty heady topic. Lean on it too much and it becomes an insidious sermon. Touch on it too lightly and it can appear trite, shoehorned in just to easily enhance a theme. The Confirmation sits mostly in the middle. Anthony is due to have holy communion and his confirmation the following week, but he’s not entirely sure why he has to do these things. He has to ritually attend mass. He is told he has to confess his sins – for as many sins as a kid can have that is. His mother is concerned that his weekend with his father will suddenly corrupt him. However, as Anthony’s time with Walt will show, he may learn more about life and respecting people than religion will ever teach him.

Nelson’s use of symbolism is a little on the nose, but is fortunately sparsely used. Walt is a carpenter, yet is finding himself in a job that is no longer fully required in today’s society. Of course, we all know the most famous carpenter (and no, it’s not Gepetto). As a man without his tools, and one who is sparsely employed, we see the increased distance to religion that people may have.

Conversely, in times of trauma, it may cause people to lean further into the embrace of religion – as seen with Bello’s Bonnie who appears to have fallen heavily into religion after her marriage collapsed. The Confirmation’s desire to show the changing face of small town America provides the film with its most impactful moments at its climax. As Bonnie leans on religion, others lean on different things to alleviate whatever stresses them in life. After all, this is a changing world, and seeing people resort to crime to just survive is sobering.

If this sounds like The Confirmation is a heavy film with deep, dark themes – it’s not. In fact, it’s quite a light affair – only really touching on the deeper themes when necessary, and mostly focused on displaying a relationship of a father and a son bonding. Clive Owen and Jaeden Lieberher compliment each other nicely – both delivering understated performances. Maria Bello is good in her small scenes. Robert Forster, Patton Oswalt and Tim Blake Nelson are good in their small roles – providing just enough to pepper the story with the necessary variety.

The Confirmation is not a ‘big’ film per say – in fact, it is the epitome of a ‘small town’ indie film. It works well enough thanks to good performances and the solid script. If you find yourself with a spare hour and a half, then The Confirmation is well worth sitting through.