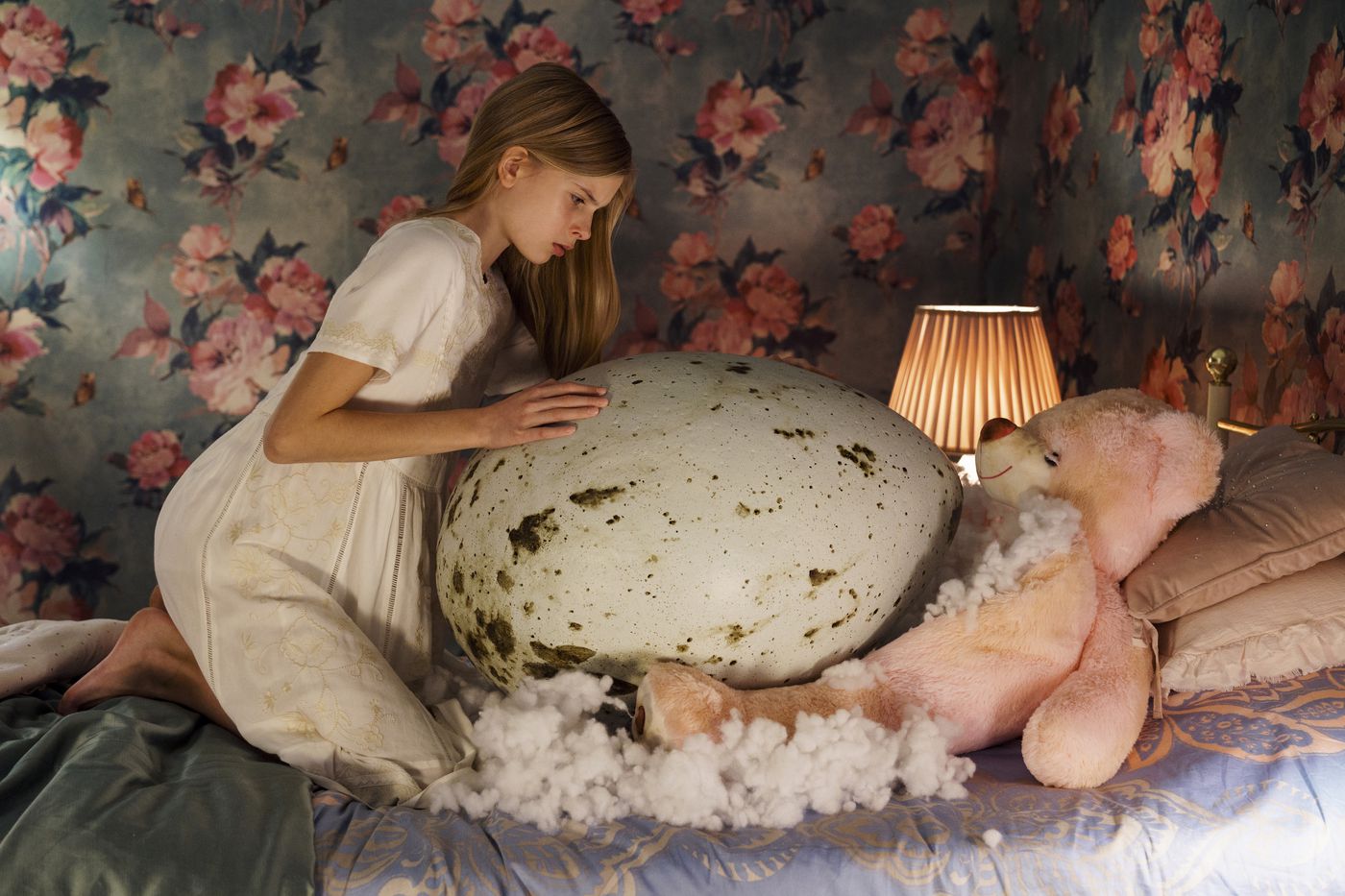 
Hatching the debut feature from Finnish director Hanna Bergholm, is a dark fairy tale about mothers, maidens, and monsters. Writer Ilja Rautsi uses and reproposes tropes long existing in folklore to create a contemporary take on the doppelgänger and the horror of excessive id triumphing over the ego.

In a pristine and vastly over-decorated suburban home a Mother (Sophia Heikkla) obsessively films her family for her blog ‘Lovely Everyday Life.’ Her family consists of her daughter twelve-year-old aspiring gymnast, Tinja (newcomer Siiri Solilinna), her milquetoast husband (Jani Volanen), and her young son, Matias (Oiva Ollila). Mother’s family is curated to be internet perfect just as every aspect of her life is controlled by the desire to project a sense of complete contentment.

Into her home a bird comes crashing through a window destroying not only the fragile image Mother created but wreaking havoc upon the décor of the living room. Tinja manages to capture the bird and hands her to Mother who promptly and shockingly breaks its neck. Mother instructs Tinja to dispose of the bird in the organic recycling (moments of comic irony litter the film) and she obeys but is clearly disturbed by Mother’s casual act of cruelty.

Tinja is a wide-eyed tween who is struggling to find her identity. Under the constant scrutiny of Mother and pushed to levels of perfection she struggles to achieve, Tinja is also socially isolated. A budding friendship with her new neighbour Reeta (Ida Määttänen) is scuppered by Mother’s insistence that Tinja must instead concentrate on qualifying for an upcoming gymnastics competition.

One night after hearing the cries of the bird she thought dead, Tinja wanders into the forest to find it (or possibly another bird) in agonising pain. The girl takes a rock to put the bird out of its misery but does so with a violence that is unexpected from a character who has thus far been the locus for kindness and sentimentality. Spying an egg nearby she takes it home to nurse in her bedroom. The egg grows to an alarming size, suggesting that Tinja is hatching something far more than a natural bird.

Indeed, when the egg hatches what appears is a grotesque creature which appear part bird and part something else. The expert puppet design gives the creature a weird duality – it is at once something deeply abject and anathema to the floral perfection of Tinja’s room, and it is also fragile and pity inducing.

The bird-creature, who Tinja names Alli becomes more than a playmate for the lonely girl. In some way she is psychically connected to Tinja and begins to play out her repressed desires. The idea that a child harbours something dark inside them is far from new, but the manner in which Bergholm depicts the monstrousness locked inside Tinja breaks new boundaries. The creature becomes Tinja’s dark doppelgänger and even as Tinja begins to lose control over her hatchling the feeling of horror stems not from what the creature does but how much it represents the psyche of a seeming innocent.

Monstrousness isn’t limited to Tinja and her familiar, it is also ascribed to Mother. A woman whose narcissism is rooted in a desire to define herself and those associated with her as flawless. Living in a loveless marriage she takes a lover, Tero (Reino Nordin). After Tinja accidentally spies the two kissing, Mother explains that for the first time she feels real love. The suggestion is that she did not find satisfaction in motherhood. For a mother to appear to not love her children is a societal sin few are willing to forgive. The complexities around indifferent motherhood are explored insightfully in the film, and by the time the audience reaches the outré finale, Bergholm has engendered a conversation about what constitutes motherly love that questions preconceived notions.

Siiri Solalinna gives an impeccable performance as Tinja/Alli. The former almost always dressed in a hazy white broderie anglaise symbolises innocence. The slow torture she endures in her everyday life is written in all her movements. The desire to be always better to please others is played with great sincerity. As Alli her performance moves to body horror and is deeply disquieting. Embodying the duality of the psyche of a pre-teenage girl in a physical form is a task that Solalinna perfects.

It would be remiss not to mention the exceptional production and art design by Pävi Kettunen and Juris Zhukovickis. Tinja’s house is made uncannier with its over-the-top magazine perfect decoration. The house gives the family no space to breathe with its unrelenting pastel palette. So too the costume design that find the family dressed impeccably in garments that emphasise their despoilment from inadvertent stains, to blood splatter.

Hatching is a film that contests what we see as acceptable femininity. Whilst it also operates as a satire on “Mommy Bloggers” the root of the piece is a tale as old as time. There is a power in the monstrous feminine (to paraphrase Barbara Creed) and horror allows a version of female emancipation, however brief. The darkest forms of wish-fulfillment are given space to exist and Bergholm allows us to empathise with the monstrous because sometimes that is the place self-actualisation occurs.