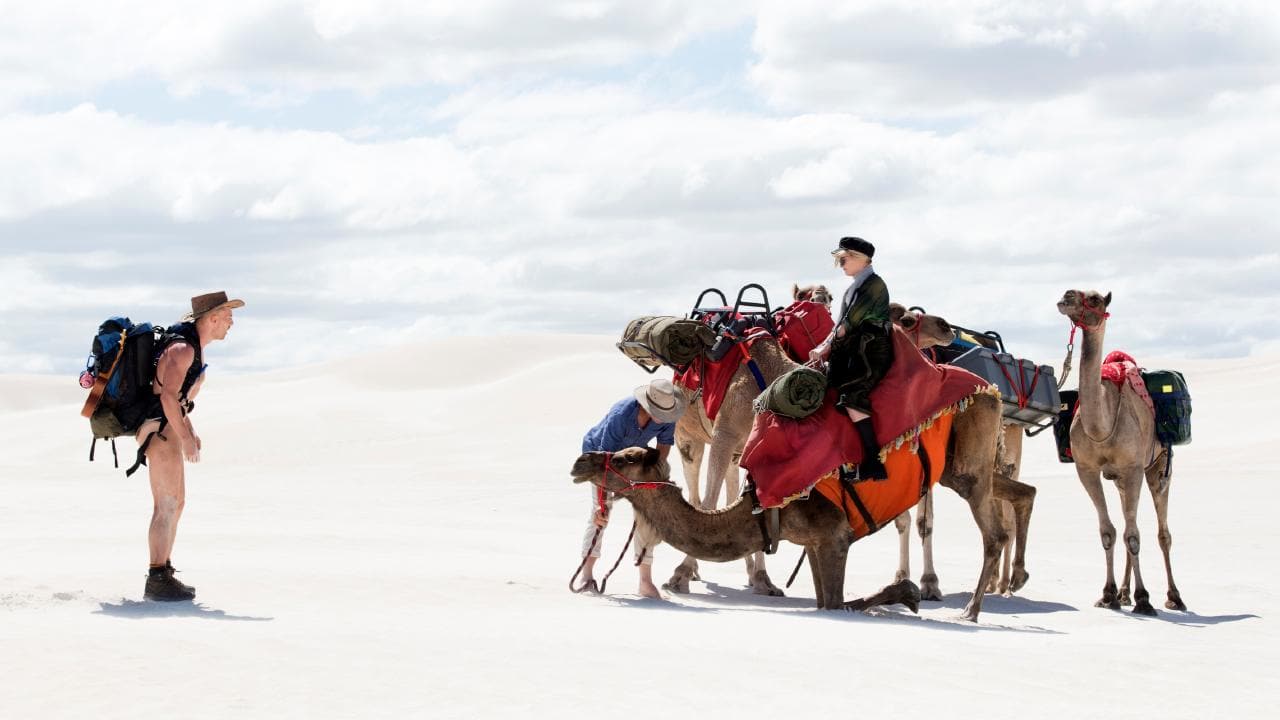 All round hot man Jake (Angus McLaren) takes his girlfriend Jasmine (Megan Smart) on a surprise diving trip. While out in the middle of the ocean, surrounded by the rest of the diving group, Jake proposes to her and is shut down immediately, telling him that she was going to break up with him that day. Back at home, sulking around his co-share apartment, Jake is berated by his best friend Cam (Callan Durlik) for not talking about the proposal with him. Less than a day later, Cam and Jake have concocted a plan to get Jake back out into the playing field and back among the women of the world: with the help of Cam’s obnoxiously wealthy and just plain obnoxious Uncle Brian (John Cleese), Jake will walk from the South West of WA to Broome almost completely naked. This is done under the guise of raising money for charity, but really, it’s just so Jake can meet ‘hot women’, or ideally win back the love of his life.

Look, I’ll get the positives out of the way first of all, because oddly enough, there are a few redeeming factors in this otherwise bland affair. The two leads, Angus McLaren and Natasha Liu Bordizzo (playing Valerie, a girl that Jake meets on his journey, and inevitably falls for), have chemistry for miles. Both Angus and Natasha do the majority of the heavy lifting to make The Naked Wanderer only just bearable. It’s amazing how far a little charisma and screen presence will take you, and it’s clear that these two have both in spades. I really cannot wait to see both actors in material that works in better service of their talents, because they’re criminally wasted here.

The other positive is that Western Australia looks bright and beautiful thanks to the combined work of Ricki Rifici and Michael McDermott. Given both have worked extensively on West Australian productions, it’s a given that they know how best to capture the sublime beauty of West Australia’s varied coastline. The beaches look as inviting as ever, with the water looking postcard perfect with its perfectly blue glean positively beckoning for any and all Instagram influencers to come take their next selfie-photo shoot in. For those who enjoy seeing a bare bum in the ocean, there’s a few occasions where Angus McLaren does take a dip in the buff, and odds are, that sight alone should have you rushing to petition to have more clothing optional beaches across this great state.

I usually wouldn’t comment on the physical attributes of the actors, but given this is a film called The Naked Wanderer, and is one that has characters frequently observing how hot other people are, I feel it’s only fair to be able to touch on the brief nudity on display. This is a far realm away from the Aussie sexploitation flicks of the seventies, and if Alvin Purple were still around, he’d be annoyed by the lack of skin on display.

Which brings me to the biggest issue with The Naked Wanderer: it’s a walking talking tourism advertisement, built under the guise that you’ll be excited by seeing beautiful beaches and buff bodies with a little bit of raunch thrown into the mix. The title itself is a blatant drawcard, intending to pull you into the fold by getting you interested by the notion of seeing a hot man walk a few thousand k’s completely starkers. Admittedly, the script does at least lean into this notion, building up a vague concept of social media buzz surrounding ‘Naked Wanderer’ Jake as he makes his journey up the coast, but it’s all hot air with no substance.

The charity aspect of Jake’s walk is only in service of trying to make Cleese’s Brian King appear like a generous businessman for the media, all while King faces demands to step down over some exceptionally vague issue that he’s gotten himself into. The majority of Cleese’s performance has him by himself, delivering some trite diatribe in an abrasive other-worldly accent, with the occasional arm wave of hysteria thrown into the mix. John Cleese is so obviously phoning his performance in – quite literally, as he filmed all his scenes in hometown London – that you can’t help but cringe at the thought of how much money was spent just for him. In fact, you can’t help but wonder if he shot his scenes on the same sets as those Bankwest ads he did. And for what? A ratchety, outdated character, as played by an obviously cheque-cashing actor? The age of Cleese’s brilliance is long gone, and whatever echo of Basil Fawlty or Monty Python that once resounded loudly has now diminished to be as loud as a mouse fart.

Which makes the biggest offense that The Naked Wanderer makes the most egregious one of them all: it just isn’t funny. Writer Callan Durlik takes dual duties as the villainous Cam, who is immediately shown to be an obnoxious, body obsessed jerk because he has two shake weights. Later, a token Indigenous character ‘reconnecting with country’ appears to make a casual rape joke. Further on, there’s not one, but two jokes about The Secret and the ‘laws of attraction’. You know how outdated the jokes are when you have to Google what The Secret is to remind yourself why it’s a joke. It’s very ‘first draft’ stuff, with each joke feeling more like a basic concept that was supposed to be workshopped and improved on, but instead of doing that, they just said ‘good enough’.

Why does this film exist? How did veteran Alan Lindsay get this film made? What about this script did ScreenWest say, yes, we’re going to fund this over literally anything else? Every step of the way there is a kernel of a good idea that, under much better guidance, could have actually been worthwhile exploring. The notion of how far people have to go to get support for charities nowadays is a concept that’s ever so briefly touched on, but then abandoned quick smart in lieu of guys needing to find someone to bang.

Everything about The Naked Wanderer screams early 2000’s Aussie comedy. You could easily imagine this having opened in the same year as You and Your Stupid Mate and it having as much cultural impact as that iconic misstep of a film. But at least that film was obnoxiously bad. The Naked Wanderer is a bland tourism advertisement gussied up as a film. While it’s beautiful to look at, it can’t be saved by the two better-than-they-should-be central performances, no matter how many times Angus McLaren gets his bum out. If there was any hope that this would get people excited for visiting Western Australia, then those hopes are dashed. You’re better off watching Instagram videos of quokkas smiling instead.