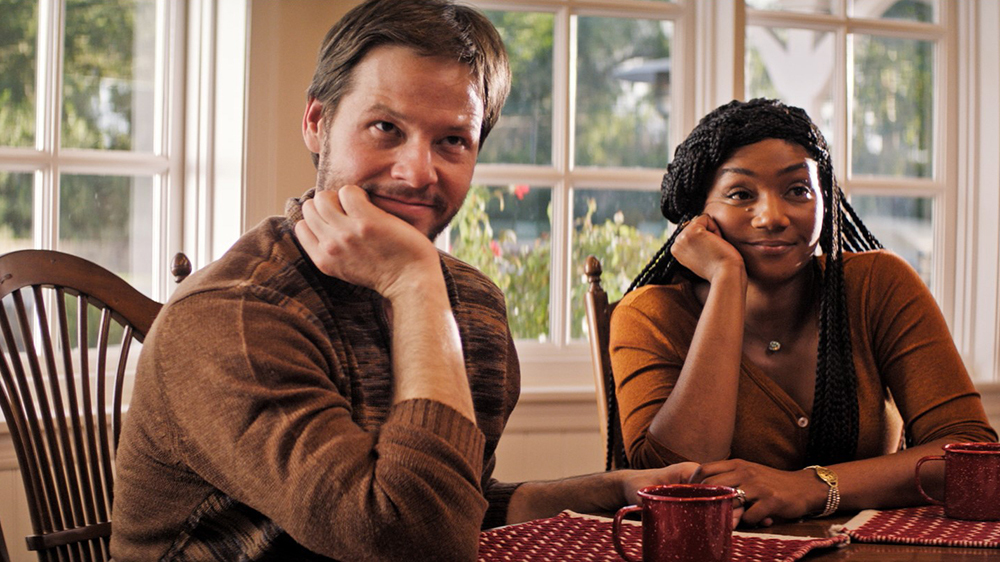 
Like standing in the eye of a hurricane, assessing every piece of debris flashing past your face, it often a fool’s errand to try and critique a crisis as it’s unfolding. The hurricane in question is one President Donald J. Trump, and with his feature directorial debut, Ike Barinholtz attempts to throw as much biting political comedic material at the critically sensitive leader. While his name is never mentioned in The Oath, it’s clear that the titular oath is one that is referring to a possible future under Trump’s leadership – one where the citizens of America are required to sign a ‘Patriot’s Oath’, an agreement that states that the citizen is loyal to the President and that they will out anyone who criticises him. It’s an idea that may have appeared illogical years ago, but in the midst of Trump’s America where he takes offense to things that he isn’t even mentioned in, it now seems downright possible.

The people of America are given ten months to sign the agreement, with the due date falling on Black Friday – the day after Thanksgiving. Barinholtz wastes no time getting to the set-up, opening up with husband and wife duo Chris (Ike Barinholtz) and Kai (Tiffany Haddish) sitting on their bed watching the news of ‘The Patriot’s Oath’ being announced, and then quickly flashing forward ten months to Thanksgiving. Chris and Kai have agreed to host the family dinner, with Chris’ far right leaning brother, Pat (Ike’s actual brother Jon Barinholtz), and his left leaning sister Alice (Carrie Brownstein), coming, alongside parents Hank (Chris Ellis) and Eleanor (Nora Dunn). However, they’re not alone as Pat has brought his Tomi Lahren adjacent girlfriend Abbie (Meredith Hagner) along, and Alice has brought her partner Clark (Jay Duplass) and kids for the ride.

The set-up takes the basic concept of political divide within families, and applies it to a time where families are supposed to unite and support each other, and shakes it up vigorously. Through the sheen of the militant right, fake news, unbending left leaners, and overwhelming political turmoil, The Oath shines as a searing indictment of politics as a whole around the world. While it’s easy to see The Oath as a pure piece of anti-Trump-ism, it is delivered with enough negatives for either side of politics that it manages to straddle a difficult middle line of being mildly partisan.

To be clear, Chris is the ‘lead’ of the film, and we see the events unfurl from his perspective, but Barinholtz knows to not make him a completely infallible character, weighing him down with an overeager desire to engage with politics and remain ‘woke’ at all times. It’s here where MVP Tiffany Haddish really shines as Kai, the anchor to keep Chris grounded as much as possible. As the aggression and violence amplifies, with Chris willing to burn everything down over a difference of opinion, Kai reminds him that ‘hey, yeah, this whole oath thing is a problem, but we have a kid to raise’. Haddish has already proven to be a genuine, exciting talent, with her performance in Girls Trip being one for the ages. Here, as Kai, she delivers a truly heartfelt performance that marries her sublime comedic talents with genuine empathy. If there’s one reason to watch The Oath, it’s for Tiffany Haddish alone.

Haddish is not alone as a force to be reckoned with, with Billy Magnussen appearing halfway through the film as a government officer coming to question Chris’ decision to not sign the oath. He’s joined by the always reliable John Cho, who doesn’t exactly manage to equal Magnussen’s electric performance. With Game Night, Ingrid Goes West, and The Oath, Magnussen affirms he is a genuine talent capable of harnessing a rare comedic energy that will have you crying with laughter. At once, Magnussen’s Mason is both dryly comedic, and then downright terrifying, often in the same breath.

While Barinholtz’s direction leaves a little to be desired as he struggles with pacing sometimes (not to mention the fact that the whole film is completely overlit), it’s his script that gives everyone the right material to work with. The back and forth between Chris and Pat’s girlfriend Abbie is genuinely hilarious, with Meredith Hagner clearly relishing being able to play the despicable and outwardly offensive Abbie. The hyper-personal vibe that comes from the interactions between Chris and Pat has me wondering whether Barinholtz is drawing from personal experience, or if the bond between real life brothers is just that strong that they can play it up for a film.

Bad Education Review – A Dance of Emotions Between Positivity and Remorse

The mileage for your enjoyment of this kind of material relies on your tolerance for political comedy. This is not as biting as Veep, but nor is it trying to be. It’s clear that Barinholtz is working through some contentious ideas with this material – ones that are tested on twitter day in/day out – and, fortunately, the writing is strong enough to stand the test of time. This isn’t a film that’s going to age quickly, given the basic theme of political divide is an eternally salient one, and as Barinholtz cheekily suggests at the conclusion, it is something that is American as apple pie.

I enjoyed The Oath immensely. It scratched that political comedy itch perfectly, and did so with great performances from some of the best rising talent in Hollywood today.