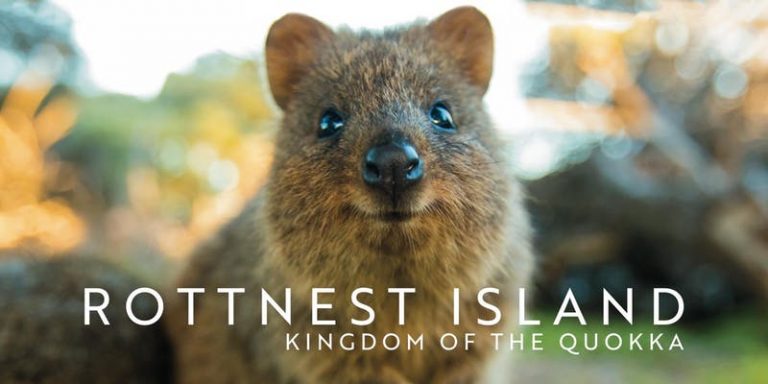 The Quokka – Like You’ve Never Seen it Before! in the Documentary Rottnest Island: Kingdom of the Quokka

The mysterious Quokka, dubbed the happiest animal on earth, is the biggest star of Sea Dog TV’s latest and unique wildlife film Rottnest Island Kingdom of the Quokka. This cute and cuddly marsupial has starred in many celebrity selfies and instantly shot to fame last year when tennis star Roger Federer posted a selfie with the Quokka and again this year, with Chris Hemsworth.

But this furry animal is more than a celebrity, the Quokka is secretive and incredibly tough, with this film revealing a different side to this popular and likeable marsupial.  Rottnest Island Kingdom of the Quokka also explores the animals of the surrounding islands and marine wonderland; the Little Penguins from the aptly named Penguin Island, the thorn between the two roses – the venomous Tiger Snakes of Carnac Island as well as Humpback Whales, Bottlenose Dolphins and the incredibly rare Australian Sea Lion.

For the first time, these animals of Rottnest, Penguin and Carnac Islands and their incredible marine environment are filmed in cinema-quality 4K video, including slow-motion, starlight and infra-red cameras to capture the majesty of behaviour amongst all species and footage rarely seen in the depths of night. 4K drones penetrate the crystal-clear waters from above to capture hunting, foraging and social behaviour on these islands off the far west coast.

Rottnest Island Kingdom of the Quokka mainly features the life cycle of the Quokka colony on Rottnest Island. These diminutive and meek marsupials seem to live idyllic lives on an island with no predators. But times are tough. The Quokka population is maxing out. Food is running low. There is very little, if no fresh water and the constant harassment by males takes its physical toll on the females. Add to that extreme heat and the pressure on these small marsupials is incredible.  See how they have survived to become one of nature’s truly majestical species.

Narrated by Logie award winning actor, William McInnes and produced by Four-time Emmy® Award nominee Leighton De Barros and Jodie De Barros, and written and directed by Leighton De Barros and Jonathon Rowdon from WA’s Sea Dog TV International, Rottnest Island Kingdom of the Quokka will instil wonderment, admiration and respect for our natural environment for audiences both in Australia and across the globe.

Rottnest Island Kingdom of the Quokka will screen for a short season at The Backlot Perth on 10-17-24-31 August
Tickets are available from https://rottnestislandquokka.eventbrite.com.au

A book and DVD of Rottnest Island Kingdom of the Quokka is also available for purchase at the screenings and online from www.seadogtvinternational.com