Thomas M. Wright is quickly becoming the Australian master of cinematic discomfort. In his debut film 2018’s Acute Misfortune he created an indelible film about the Australian artist Adam Cullen and his biographer Erik Jensen that was awash with toxicity and implied violence. Essentially a two-hander that explored the damaging relationship between Cullen (Daniel Henshall) and Jensen (Toby Wallace) the film was unrelenting in its tension. Again in The Stranger Wright opts for a two-hander approach which concentrates on the increasingly fraught connection between its two leads – Mark (Joel Edgerton) and Henry (Sean Harris). The first is an embedded undercover policeman trying to find out the truth about the latter, a suspect in the kidnapping and murder of a young boy.

Based on the true crime investigative book ‘The Sting’ by Kate Kyriacou, the film loosely adapts the immense undercover operation to uncover the truth about one of Australia’s most infamous child murders. Although Wright has changed the names of all involved the case was so prominent in the Australian media that it is clear who it is representing. Wright has stated that he struggled with the idea of adapting the book but in his approach he has done as much as he can to avoid sensationalising the violence of the case (the abduction and murder are never shown) and instead uses the piece as a psychological character study that illuminates the terror Mark undergoes as he gets closer to Henry.

The film begins on a bus in Western Australia. Two men are returning from the airport. Paul (Steve Mouzakis) strikes up a conversation with Henry. Both men are ex-cons and down on their luck. Paul soon hands Henry off to Mark who is a mid-tier handler in a crime organisation. The organisation is a godsend to Henry as they are able to scrub identities and give significant payouts to members. In one scene Paul is handed a new passport, air tickets, and ten thousand dollars to disappear for a year. Such an enterprise promises great benefit to Henry and he becomes excited to be given the opportunity to disappear from his past – all the organisation insists on is that its members are honest about their past misdeeds to they can ensure there is no blowback on them and know how to best deal with any contingencies.

Mark becomes more than Henry’s handler; in Henry’s eyes he is his friend. Henry doles out small portions of information about his past which Henry calmly does not react to. The point of the operation is to get Henry to admit to a heinous crime and it relies on Mark’s skill to act the part of a non-judgemental criminal to eke the information out of the suspect. Mark is not a professional actor, he’s just a cop doing his job and the closer he gets to Henry the more it begins to impact on his psyche. Mark has a young son of his own and his anxiety is increased as he internalises the stress of dealing with a man who could be a child murderer being his near constant companion. His nightmares become vivid when and if he is able to sleep. He drinks almost constantly. Mark is a man living on the edge of his capabilities not only as a cop but also as a human.

Wright’s film is gritty and unbearably tense. As the relationship between Henry and Mark unfolds there begins to be a sense that we don’t know what either men are really capable of. Wright also chose to present Henry and Mark as looking alike; both men are bearded, grizzled and sport a ponytail. The uncanny effect adds another layer to the psychological dimension of Mark’s character. During one of his nightmares he sees a man sitting on the bed next to his son. That man is implied to be Henry, but it is Mark. Mark has to fight to keep his identity his own, to breathe out the darkness he is taking in.

Wright plays with timelines in The Stranger. Events we assume to be contemporaneous are instead played out of order. Two investigating detectives Rylett (Jada Alberts) and Ikin (Fletcher Humphreys) are working on Henry Teagues’ case. They are part of the Queensland police force and through careful investigation they are able to prove that Henry (aka Peter Morgan) was not only capable of abducting the victim but also lied about his alibi and had a previous conviction for child kidnapping and molestation. Their investigation opens up the sting operation that recruits Mark. Wright is restrained in never showing the violence of Henry’s crimes, but he does allow for Rylett to read a transcript about the previous conviction in the Northern Territory that is so horrifying that the detective almost weeps as she relates it.

Wright stated that The Stranger depicts a country that exists on hidden violence. Cinematographer Sam Chiplin’s desaturated work is impeccable, but the most effective use of visual imagery is when a mountain that is used as a motif for the film is juxtaposed with Henry’s profile. Violence and the land become one and it is a subtle, yet canny reminder of the violence perpetrated on First Nations people in Australia.

As with Acute Misfortune the actors embodying the protagonists are key to carrying tension and veracity. Joel Edgerton is unarguably one of Australia’s finest male performers. As Henry his restrained but tortured performance is outstanding. Sean Harris is one of the best character actors in the world, and in addition to playing an Australian convincingly, his subtle and not so subtle menace is astonishing. There are times when he is almost pitiable but then others where he is so clearly a sociopath with no concept of remorse that the audience is made to endure the ‘unknowable’ aspect of a criminal. Wright wraps nothing up in a neat bow but instead allows questions to linger and upset.

The Stranger will hit international audiences differently. What they will see is a twisty crime thriller (which it is) but without the knowledge of the case on which it is based the film will be viewed from a distance that Australian audiences don’t have. Wright’s film states from the beginning that it is based on true events, yet as the film progresses the truth of the operation (although astounding) becomes somewhat secondary to the more universal truth about trauma and its lingering effects on people involved with violent crime.

Wright’s ability to capture distress yet not overstate it is incredible. The Stranger avoids onscreen violence, yet the film is soaked in the effects of it. Just as Justin Kurzel’s Nitram chose not to show the massacre perpetrated by the main character yet allowed the audience to experience the horror of what happened off-screen, The Stranger also doesn’t allow the tension of implied dreadfulness to be diminished. Both films are disquieting, distressing experiences, and are acutely confronting. The Stranger is a masterful film, but it’s not a film that is simple to digest. Like Mark, audiences will be haunted and left without the catharsis to distance themselves from the film. The Stranger is partially a work of fiction but the world it is based on is not. 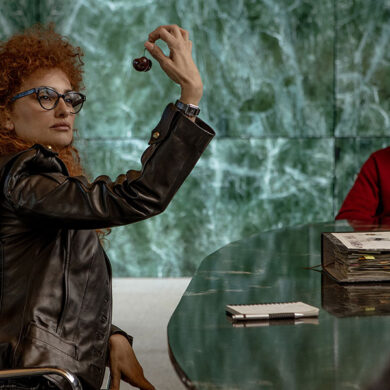