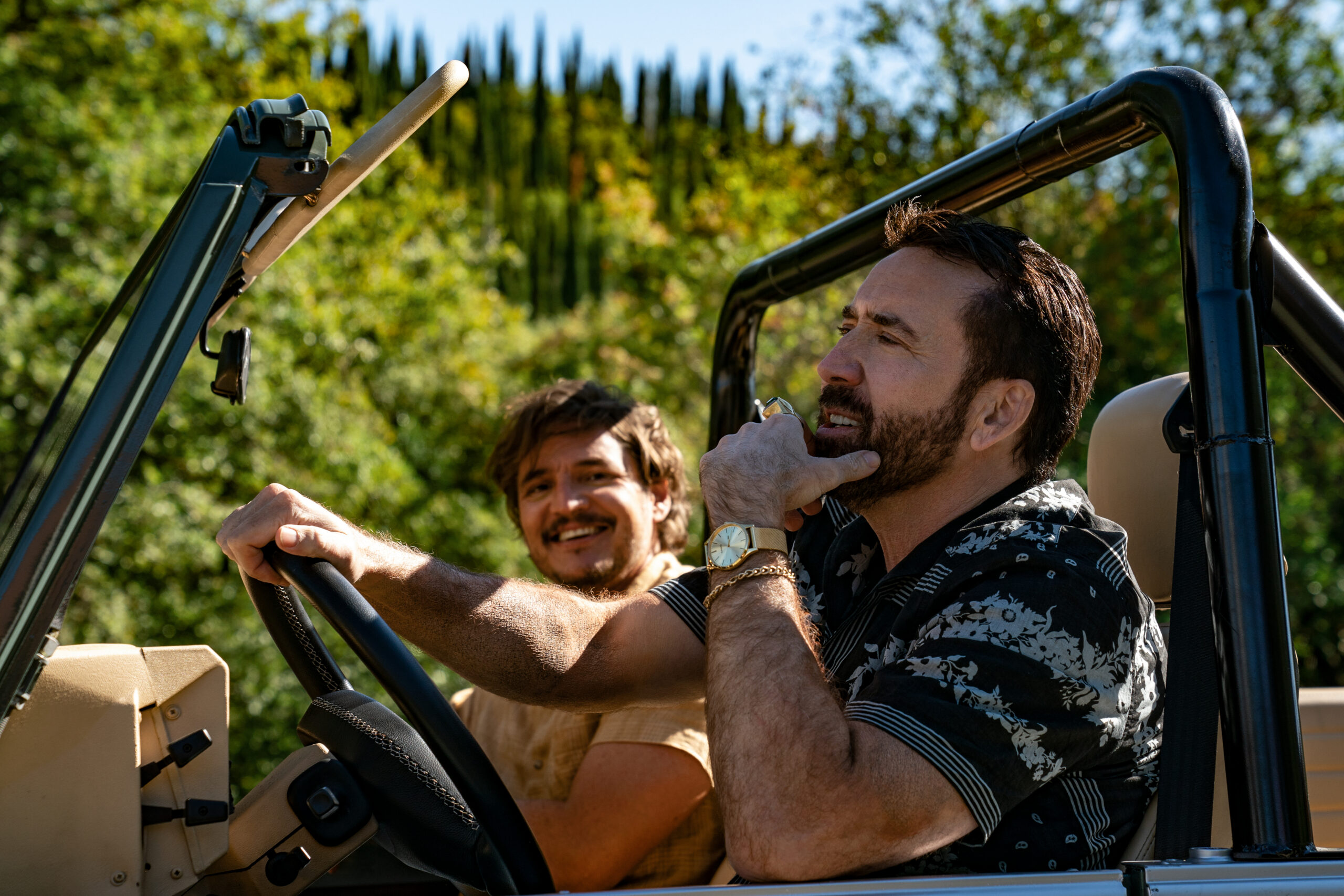 I’d wager that almost everyone remembers the first time they saw Nicolas Cage on screen for the first time. For me it was Martha Coolidge’s 1983 romantic comedy Valley Girl. I don’t remember the female lead, but I do remember looking at Cage and thinking “Who is this guy? He’s great!” For years afterwards I remained a steady fan of Cage, and although I can’t claim to have seen everything in his vast filmography (editor: 104 released films at time of publication), I have seen enough to know that his claim that he “never phones it in” on a role to be true.

In Tom Gormican’s The Unbearable Weight of Massive Talent Cage is given the opportunity to play one of his most complex and hilarious characters: himself. Nick Cage is going through some hard times. He’s not working, and he misses out on ‘the role of a lifetime’ after a disastrous meeting with the director of the project (played by David Gordon Green who directed Cage in Joe). He’s going through a divorce from his make-up artist wife, Olivia (Sharon Horgan) and isn’t connecting with his sixteen-year-old daughter Addy (Lily Mo Sheen). On top of all of this his extravagant lifestyle has left him broke and he’s being berated by a younger version of himself, Nicky, for failing to realise that he’s a “fucking MOVIE STAR” and needs to sort out his shit before he falls into Hollywood obscurity.

His agent Richard Fink (Neil Patrick Harris) offers him a bizarre gig. Turn up for a party for super fan Javi Gutierrez (Pedro Pascal) in Majorca for a tidy sum of one million dollars. At first Nick is reluctant, but when he discovers just how dire his financial circumstances, personal, and professional life are, he agrees.

Thus begins one of the most entertaining comedies Nicolas Cage has been in for years. There are so many call-backs to his films scattered through the movie that it would be hard to keep up, yet this metatextual commentary on Cage’s career isn’t as overwhelming or cheesy as one might expect. Gormican reminds us that movies bind us in unique ways and choosing someone whose career is as storied as Cage’s to make this point is bang on clever.

Javi, the super-fan, is a millionaire although where he gets his wealth from is suspect. It’s possible that he’s the head of a crime family responsible for everything from gun running to kidnap for extortion. His stunning home is a well-guarded compound that the CIA has been trying to infiltrate. After the kidnaping of the daughter of a political candidate CIA agents Vivian (Tiffany Haddish) and Martin (Ike Barinholtz) are running out of options to find a way into the compound. Surveilling the airport they see Nick Cage arrive to be taken to Javi’s compound. Vivian acts quickly and pretending to be a fan of Croods 2 asks for a selfie with Nick and drops a tracking device on him.

In the meantime, Nick is considering his future as an actor. He admits to Javi that he plans on retiring when he returns to Los Angeles. Javi (an aspiring screenwriter) does everything in his power to change Nick’s mind. Thus begins a truly wonderful story of friendship forged under bizarre circumstances. Javi, like Nick, is walled off from people he loves and has channelled some of his pain into excessive devotion to Cage’s films. The chemistry between Cage and Pascal is convincing, and despite the comic tone one gets the sense that the two lost souls have found solace in each other. Of course there is the small problem that the CIA activate Nick to investigate Javi and find the kidnapped girl which changes the dynamic of the film from buddy comedy into action.

Although the third act is pretty much written by what happens in the second, it’s hard to dislike any of Gormican’s conceits. Pascal and Cage are just so damned charming together and their friendship sits at the heart of the film. Pascal is given a chance to show off his comedic talents which were somewhat wasted in Judd Apatow’s The Bubble (to be fair he is probably the best thing about that film). Cage shows he still has remarkable range and is unafraid to face some semi-fictional home truths. Although anyone in doubt of Cage’s ability to turn in a stellar performance should really check out Michael Sarnoski’s incredibly moving film Pig.

At its heart The Unbearable Weight of Massive Talent is a comedy that wears its heart on its sleeve. It is a special treat for Nicolas Cage fans, but the appeal doesn’t begin nor end with Cage. It’s hard to pull off metatextual comedy without a small cringe factor but Gormican manages to do it with aplomb. One thing is for certain, whilst watching Nick Cage you’ll remember just why you love Nic Cage. The man may have had his share of failures, but he’s worth his weight in gold – he’s really a fucking MOVIE STAR.