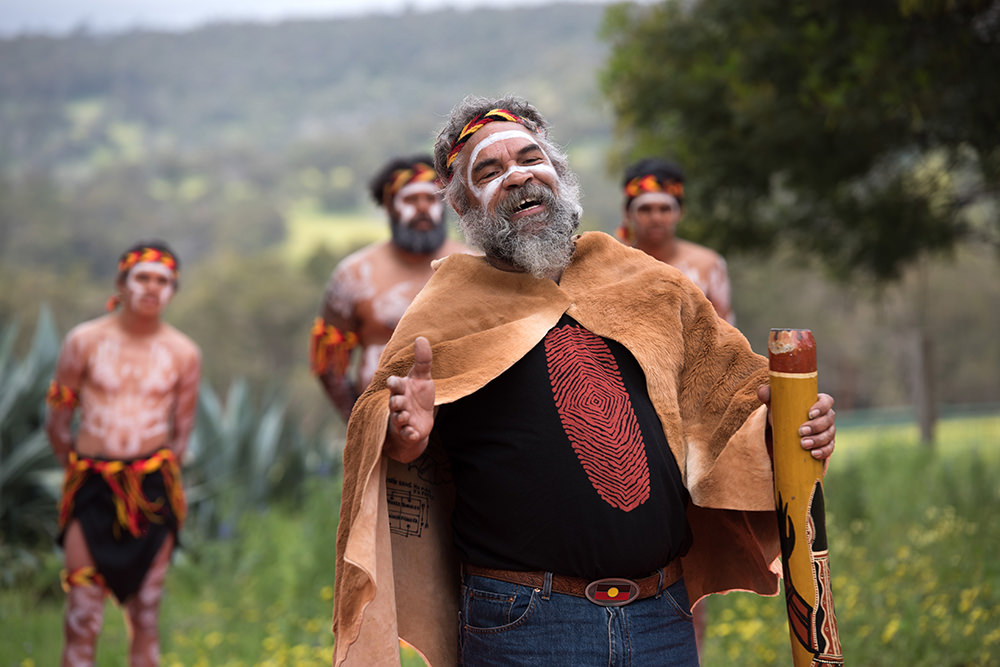 Let’s get the poster quote out of the way to start off with – Three Summers is one of the best films of the year. It’s a hilarious celebration of life and community, all fuelled by an exciting, toe tapping soundtrack. The glorious South West of Australia has never looked so inviting and beautiful. And for those who exit this film wishing that the fictional Westival music festival was a real event, then they can start booking their flights and buy a ticket for the real Fairbridge Festival that inspired the film. Got it? Great. Now, make sure to go buy a ticket and see this film – you won’t regret it.

So, that’s my review for Three Summers.

Well, sure, it could be my review for this wonderful film, but you probably want to know a little bit more about it, other than ‘go see it’. Set in Western Australia, Three Summers is written and directed by true blue Aussie Ben Elton, and focuses on the Westival folk festival and the musicians and folks who attend the festival. Featuring a who’s who of Australian comedy, with Magda Szubanski, Michael Caton and Deborah Mailman being the cream on top of this full bodied country grown milk. (Too much?)

There’s no plot to Three Summers per se, other than following a bunch of characters around the festival and how they interact with one another. Where films like Australia Day and High-Rise work to show the hierarchy of society and how people of different social status interact with each other, Three Summers manages to slyly present a festival sized version of Australia and all the social tiers that exist in this country of ours. Unlike Australia Day and High-Rise, Three Summers succeeds in its exploration of society, and provides a positive platform to leap into issues that plague Australia, and the world, right now.

Now, don’t go thinking that this is a lecture on what Australia is doing right or wrong. Far from it. This is simply a presentation of a community that has a common interest – folk music – and the way that community deals with common issues, such as, how to hook up with a musician, what to do when someone who is culturally different than you presents their culture in public, and what to do when your life becomes repetitive. Ben Elton is a seasoned writer who has made a career on creating socially conscious comedy that wryly entertains while it equally informs. Three Summers is no different.

Australian comedy regularly showcases the battler, the ­­’other’, the Aussie family in jeopardy, and most importantly, the underdog. Think of the difficulties that the Kerrigan’s went through to keep their home in The Castle. Think of the journey that Bernadette, Mitzi Del Bra and Felicia Jollygoodfellow took into the desert to reaffirm who they are in The Adventures of Priscilla, Queen of the Desert. Think of the titular toilet cleaning ocker bloke in Kenny. Three Summers showcases a whole festival full of ‘the other’, with a group of indigenous kids sharing the screen with a band made up of asylum seekers.

Three Summers is simple full to the brim with joy and an earnest desire to just make you feel good. Even though Kelton Pell’s indigenous leader, Jack, regularly brings up the invasion of Australia and the disadvantages of indigenous youth, it’s done with a smile and in a joking manner that only Kelton Pell could deliver. There’s a fine line between laughing with a character, and laughing at a character, and Elton’s writing always ensures that you’re laughing with the right characters, and when needed, laughing at the over the top caricatures. Michael Caton’s grandfather figure, Henry, is one such caricature. Here, the usual eccentricity that comes with a caricature is delivered with a level of humanity that only Caton can deliver. His grandfather figure leads an eccentric dance troupe, and is initially disgruntled by Pell’s indigenous dances, his ire working as a surrogate for the ‘I want to walk on Ayer’s Rock’ brigade. Henry, inevitably, finds common ground with Pell’s leader, in turn providing one of the many emotionally cathartic moments at the climax.

It’s important to note as well that the inclusion of an indigenous elder, Koodah Cornwall, as a cultural guide behind the scenes, helped drive a level of authenticity and honesty that may well have been missing otherwise. In a touching moment, the radio host Queenie opens the film with recognition to the traditional owners of the land the festival is taking place on. This is quite possibly the first time in Australian cinema that the acknowledgement of traditional owners has been presented. It’s a sign that Elton wants to welcome all to enjoy and participate in his story.

Ben Elton’s use of actors like Magda Szubanski, Michael Caton, Deborah Mailman, Peter Rowsthorn and John Waters, helps work as a short hand for audiences. Szubanski’s Queenie works as the radio based narrator for the festival, providing some of the most amusing off the cuff comments. In a jam packed film that covers a gamut of issues that live in Australia at the moment, it’s these welcome casting decisions that help deliver such themes as alcoholism, the fear of failure, and in turn, the fear of success, and the refugee crisis, and in turn makes them relatable. Notably, the scenes with Peter Rowsthorn and the couples group that he visits the festival with, make for a great chuckle worthy palate cleanser.

That’s the key to Three Summers – the laughs are varied and always earned. A comedy lives or dies on its jokes, and Three Summers throws more than a joke a minute at the audience – with all of them landing to great effect. It’s great to laugh out loud, but with Ben Elton’s genius, he spaces out the loud guffaws with the quiet chuckles. On top of this, the humour is cross-generational, with characters like the simply brilliant Diamond (Adriane Duff) delivering laughs for the younger audience members, and Caton’s Henry hitting the older generations. Either way, young or old, there’s something here for everyone to get a laugh from.

If the notion of a film set at a folk music festival suddenly gives you nineties era The Corrs flashbacks, then fear not, the music selection here is top notch. The soundtrack that plays like a who’s who of Australian music; with everything from the decidedly non-folk music Gotye, Little Birdy and Birds of Tokyo, to the folk-enough-esque Xavier Rudd, John Butler Trio and the late Dr G Yunupingu rounding out the mix. It’s toe tapping fun, that is paired with some genre bending theremin (no, not the tannerin) tunes, as well as some barn storming entertainment from the Warrikins. Visually, Katie Milwright’s cinematography captures the South West in all its beauty. The aerial shots that establish the outlay of the Westival festival are simply sumptuous.

Joker Review – An Ugly, Dark Movie That is Unlikeable

Look, I know I rave on about Australian films and how great they are, and I will often badger folks to go see films that they may not usually go and see, (and I still highly recommend watching as many Aussie films as you can), but if there were one film from 2017 that I really wish that every Australian would go and see, it’s Three Summers. This is the film that Australia needs right now. Through comedy we are united, and through comedy, we can explore contentious issues with relative safety. Ben Elton does exactly that. He presents a world as he sees it – a community coming together to celebrate music and life, and through that joyous event, they reflect on who they are and what path they took to get them there.

For all the success that international comedies have in Australia, it seems that it’s a grand challenge for Australian comedies to stake a flag in the Aussie box office. Often with Australian cinema, it feels like films are produced with the view of starting careers internationally. The insular nature of the Australian film industry can make a continued career difficult, so with that in mind, it’s great to see that Three Summers exists as a film made purely for Australian audiences. No doubt international audiences will get as much joy from the film as Aussies will, but for now, this comedy, this tale, is one purely for all us Aussie folk who love a belter of a night out in the cinema.

Three Summers will sit comfortably alongside The Castle, The Adventures of Priscilla, Queen of the Desert and Kenny as being an Australian comedy classic. Three Summers is purely joyous. It’s a film that makes me excited and proud to be Australian. It left me with a feeling of hope and pure warmth, that one week after watching it for the first time still remains. I look forward to watching this again with a packed audience, experiencing the joy that a great comedy brings through uniting strangers in a cinema with laughter. Laughter seems to be in short supply lately, so do yourself a favour and fill your prescription with Three Summers.