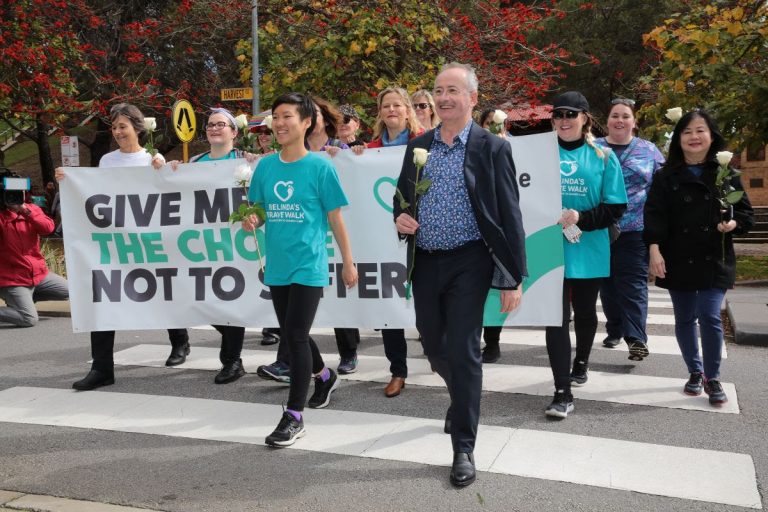 “I wanted to take the message of the compassionate VAD legislation that has been recently introduced in Victoria, and bring that back to WA,” said Belinda.

The 27-year-old, who grew up in Perth’s southern suburbs, carried a white rose every step of her journey in memory of her mum Mareia who died in agony from aggressive breast cancer in 2016, and was refused assisted dying after two requests to doctors as a patient in a specialist palliative care facility.

“This is a once-in-generation chance to change the law in WA so that what happened to my mum doesn’t happen to anyone else,” Belinda said.

Her final day of walking began at Murdoch Hospital where 30 nurses turned out to support her as she departed for Parliament, including nursing colleagues who worked with Belinda’s Mum Mareia at various health facilities throughout her 39-year nursing career.

Belinda called for Western Australians to join her on the final leg of her journey from Kings Park to Parliament with more than 300 turning out to join her in an emotional trek that included high profile supporters Andrew Dent on and Adam Gilchrist.

At Parliament House, Belinda was welcomed by the Premier Mark McGowan, Deputy Premier Roger Cook, Opposition leader Liza Harvey, Alana McTiernan, Amber-Jane Sanderson and other MPs who will soon vote on WA’s Voluntary Assisted Dying bill that was presented to Parliament on Tuesday.

Belinda presented a basket of white roses to the Premier, who added his rose to acknowledge his support.  Parliamentary debate on the bill will begin at the end of the month.

“This is a bill that would give dying Western Australians the option of avoiding unnecessary pain and suffering. And I expect it is a law that would have helped my mum,” Belinda said in her speech outside Parliament House.

“My message to WA politicians is this: the next few months will define the future of voluntary assisted dying in this country, and what happens next is up to you. This is your chance to make Australia a more compassionate place.

“To my fellow West Australians in particular, my message is this: be brave. Change is possible, but we have to be brave enough to speak up. The single most powerful thing you can do is to talk to each other, and to your local politician who represents you. Don’t do it for me – do it for the people in our community who can’t,” she said.

Belinda said people must make their voice heard if they want this choice not to suffer, and urges them to take action.

“There are real indications that MPs are not listening to the 86% of people who want this law or the evidence supporting the urgent need, heard by the 18-month parliamentary inquiry,” she warned.

Belinda completed her 70-day journey as an ‘assisted walk’ – where she had a support vehicle and called on help from supporters along the way.

She walked through many towns in western Victoria and South Australia, crossing into Western Australia at Eucla on 22 June. She passed through regional WA locations in the Great Southern, Goldfields, South West and Peel region on her way to Perth, meeting supporters and collecting signatures for her petition along the way.

Belinda said memories of her mother and words of encouragement from supporters had helped her stay focused over the past 70 days, along with several pairs of new shoes.

“Along my journey I met so many people with similar stories. Their willingness to share their experiences continued to inspire me and give me the strength to walk to the end to bring this important message to the West Australian Parliament,” said Belinda.

For more information visit at BelindasBraveWalk.org.au and the @Belindasbravewalk Facebook page.