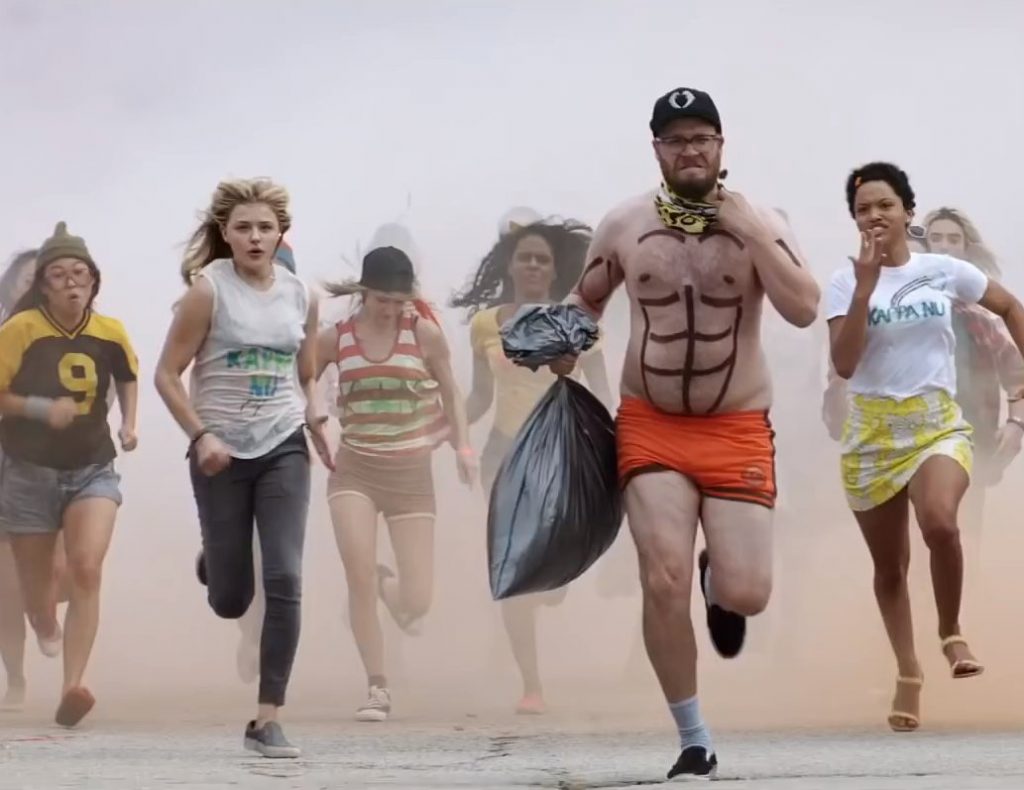 Part of my excitement for going into the somewhat unexpected comedy sequel Bad Neighbours 2 (as it’s known in Australia) was getting to see the great on screen chemistry between leads Seth Rogen and Rose Byrne again. Knowing that the original films ‘villain’ Teddy (Zac Efron) would be back in some capacity as well made the prospect of watching this film all the more better. Notoriously, comedy sequels are simply not as good as the films they originate from, but I’m as surprised as many people will be, Bad Neighbours 2 is not only a great sequel, it’s also a great comedy.

The fraternity house from the first film that stands next to Mac (Seth Rogen) and Kelly (Rose Byrne)’s family home is vacant. The fraternity has moved on, with their members going off and advancing in their life – whether it’s becoming a police officer or getting married, their raucous party filled nights are over. Meanwhile, Shelby (Chloe Grace Moretz) is looking to join a sorority. When she applies to join one particular sorority, she discovers that on campus sororities are unable to have parties – a real world inequality that informs the film wonderfully. After attending a somewhat terrifying fraternity party where women are seen as items that simply exist for these non-men non-boys to fuck, Shelby teams up with Beth (Kiersey Clemons) and Nora (Beanie Feldstein) to launch their own sorority where they can party without fearing being raped – Kappa Kappa Nu.

Now, going into this film I had little knowledge of the plot – I thought it was a simple reskin of the original films plot; this time, instead of males, it would be females running riot. What I didn’t expect was not only a great comedy that matches – and often exceeds – the original film, but a comedy which can easily stand alongside Nicholas Stoller’s other great comedies – Forgetting Sarah Marshall and The Five Year Engagement. It’s a shame that when modern comedy is discussed that Stoller’s work isn’t brought up in discussions more. Not only are his films genuinely funny, but on subsequent viewings, the grounded elements of his characters helps carry the film long past the point where the jokes have lost their impact.

Where the first films conflict was created by the arrival of Mac and Kelly’s new child, here the conflict is driven by Mac and Kelly wanting to sell their house and having to deal with escrow and the thirty day period where the potential buyer can pull out of purchasing the house. Chloe Grace Moretz’s Shelby and her team of sorority sisters want equality, they want to be respected and they want to enact change for their fellow sorority sisters and to have the same rights that fraternities have in throwing parties. The sisters want to attend college and feel safe, to be able to socialise with friends at parties which don’t have communal drinks which are spiked with drugs. It just so happens that their off campus sorority can provide that opportunity.

Stoller’s script informs, just as often as it entertains. It’s to Moretz and co’s credit that the sorority sisters never turn into the ‘villains’ of the piece – you can see the arguments for both sides of the conflict. This is something that Stoller had managed to do with the original film – even if those party running characters were a little more obnoxious than the ones here. On the same page, the comedy here is surprisingly varied – each character feels like they have their own comedic style. Often with comedy films, each character operates on the same comedic tonal scale across the board – here, Rogen’s Mac operates on a different level than Efron’s Teddy who operates on a different level than Ike Barinholtz’s Jimmy.

If there’s one thing that Bad Neighbours 2 will be able to proudly walk away with, it’s shining a light on the problems within the American college system. Yes, documentaries like The Hunting Ground have touched on issues in more depth, but within Bad Neighbours 2 it shows these problems in a manner that will reach more audiences. This isn’t rewriting the comedy book, it’s simply using the medium to further the understanding of what is going on in the real world.

The core four performances from Rogen, Byrne, Efron and Moretz are brilliant. All have superb comedic timing, embodying a wonderful pathos which is often missing in modern day comedies. Efron’s Teddy grows over the course of the film, past being just a generic fraternity douche into a realistic character.

Bad Neighbours 2 impresses more than comedy-sequel history says it should. This simply should not be as funny as it is (one particular joke had me laughing a lot louder than I usually would in a theatre), and it also simply should not be as informative and involving as it is. Thanks to Stoller’s direction and writing, and the cast’s great performances, I genuinely cared about the outcome of all the characters involved here. A pleasure of a comedy to watch.

(In the US, Bad Neighbours 2 is known as Neighbors: Sorority Rising.)