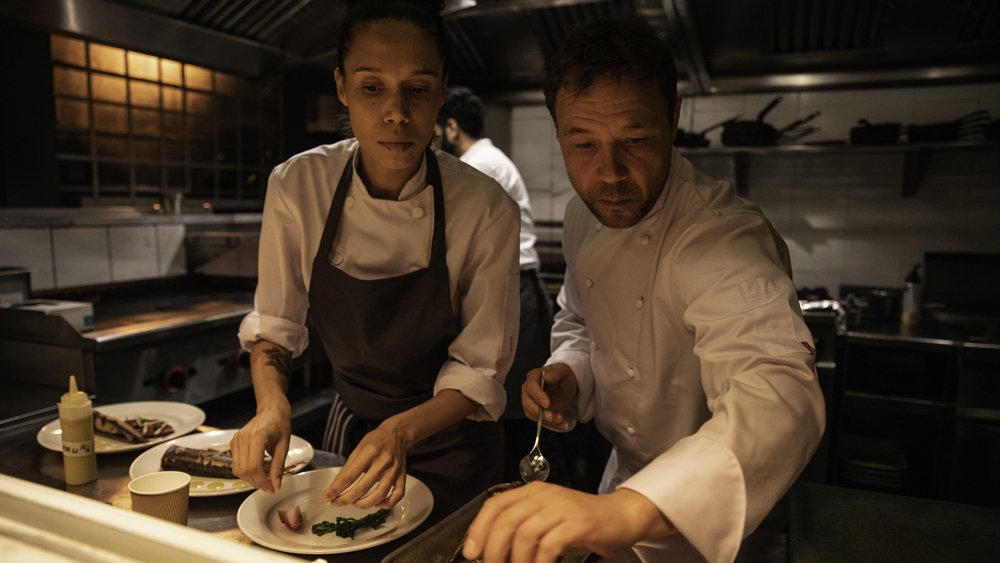 With Boiling Point, director Philip Barantini crafts a remarkable one-shot film about a chef in a successful restaurant who is on the edge of personal and professional ruin. Andy Jones (Stephen Graham) is a burnt-out case. His personal life is in tatters as he is separated from his wife and son and has only just found a flat to live in after two months of living out of a suitcase. Professionally, his standards at the restaurant have been slipping as is revealed in a health and safety check by an officious council officer in the opening scene. His kitchen crew, including his supportive but exhausted sous chef Carly (Vinette Robinson) are trying to cope with his mistakes and oversights whilst also trying to deal with Emily (Hannah Waters) a front of house manager who is both inexperienced and openly hostile to her employees.

After years of reality television attempting to give audiences a taste of the stresses involved in running a functional kitchen, some of the story beats will be all too familiar; however Boiling Point does more than show the pressure cooker of the professional kitchen environment – it asks you to consider how people cope with stresses of their environment.

Focussed not just on the kitchen staff but also the servers, the film shows instances of racially motivated micro-aggressions as one customer becomes hostile when his white server Robyn (Áine Rose Daly) is replaced by a Black server Andrea (Lauren Ajufo). Other customers become over familiar with the wait staff, others still insist on ordering off menu, which becomes a point of contention when Emily allows it because the customers claim they are Instagram influencers.

Influence in the restaurant business comes into sharp focus when Andy’s former boss and now celebrity chef Alastair Skye (Jason Flemyng) turns up with a food reviewer in tow. Andy isn’t prepared to serve Alastair as the menu has been somewhat compromised due to his inability to organise ordering. Andy is also in no way ready to discuss the sizeable loan Alastair has made him and is placed under further stress when Alastair begins to insist that he takes on a share of the restaurant. Trying to impress Alastair and critic Sara Southworth (Lourdes Faberes) is just one factor that’s turning Andy’s work night into a nightmare. As the title suggests events lead to a boiling point for Andy (and others) and the layers of drama unfold.

Although there are elements in the film that are very familiar to viewers, what carries the work is the naturalistic performances by Graham and the rest of the cast. The film feels almost like a documentary or reality show as the camera follows the cast relentlessly through the harried evening. Cinematographer Matthew Lewis has done extraordinary work to make the camera almost an extra character. The focus never wavers and because of that the tension never abates.

Stephen Graham is possibly one of Britain’s best character actors and as Andy he is riveting to watch. From his moments of fury, to those of desolation and despair he is utterly convincing. Vinette Robinson as Carly is deeply impressive as she tries to rein in her own angers and frustrations at essentially running the dysfunctional kitchen without adequate help.

Boiling Point is a mature drama that is focussed and driven by both the technical craft behind the scenes and the performances that captivate: it’s a muscular effort that wastes not a moment of its tight run time and is as unrelenting as the business it characterises.