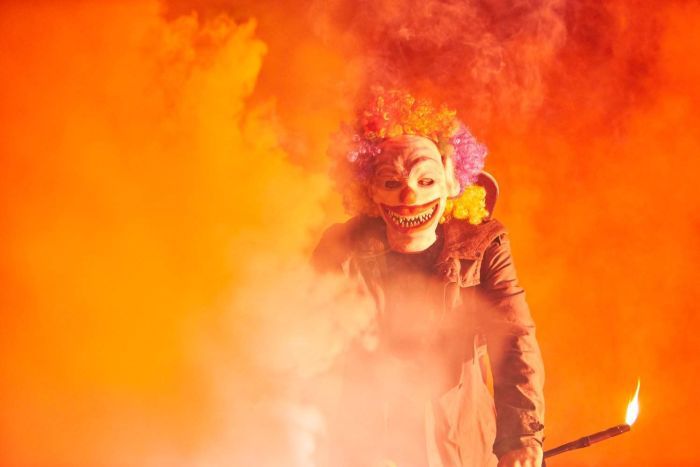 Boys in the Trees Review

The subject of bullying is something that appears quite often in films – however, it’s rarely as deftly handled as it is in Nicholas Verso’s Boys in the Trees. Toby Wallace headlines as Corey – a teen on the verge of deciding the future of his life. Dealing with that potential fallout is his ragtag team of friends aka The Gromits, lead by Jango (Justin Holborow). It’s Halloween night, so to celebrate the evening, the group of boys take to the streets to cause all manner of mayhem and destruction. Thrown into the victim role and the receiving end of Jango and co.’s bullying is Jonah (Gulliver McGrath) – a kid who may have a history with Corey.

As Corey and Jonah rebuild their once vibrant friendship, they walk through the backstreets of suburban Adelaide – dilly dallying on their way home. This long winded path through a seemingly endless night puts Corey and Jonah in situations that feed into the theme that bullying can take form in many different ways. A sequence with a foreboding house with a menacing front gate is a prime example of this.

At its core, Boys in the Trees is about the effects of bullying, and how easy it is to be persuaded by peer pressure into becoming a bully. Now, this is no Larry Clarke film – even the bully’s here are fleshed out characters – but you do get a solid impression how groups of boys can team up and demonise younger, or different people. On the flipside, there is a great realisation that people can grow past the juvenile aspects of bullying – most notably, Corey’s aspirations to be a great photographer (this is the nineties after all, when being a photographer was still a possible career choice).

Corey doesn’t want to be trapped by the suburbs, seeking a better life for himself. A chance photo he took of Jonah haunts him throughout the film after The Gromits have seemingly utilised all of the paper in Adelaide to print off endless prints of the photo and disperse them throughout the streets. The symbolism is strong here – sadly, straying into cringe worthy territory at times – with talks about wolves and lambs and the various superbly designed costumes that the kids wear to celebrate Halloween.

This relationship between Corey and Jonah is the heart of the film, so it’s then frustrating when The Gromits appear on the scene to disrupt the motion of the film. While the performances are solid all round – The Gromits do at times feel as if they simply exist to provide some of the films more visually exciting moments. The dark is eerily lined with a layer of fog that permeates through the streets, adding an uneasy mood that hangs over the events of the film. A late sequence showcases the teens riding through the night with fireworks pouring their light from the handlebars of their bikes. Every shot has aspirations of being a framed on a wall – which is apt given Corey’s aptitude for stunning photography.

Set in 1997 Australia, the soundtrack is littered with everything from Spiderbait to Jebediah – it’s teeming with tracks that would have filled thousands of shoddily made mix tapes. After the third or fourth track, the nostalgia blast becomes a little too much, overshadowing the core themes, and instead accentuating the memories of how daggy kids were growing up in the nineties.

At an hour and fifty minutes long, Boys in the Trees is a little bloated. After an extended opening, which attempts to provide a backdrop for some of the peripheral characters, the film properly kicks in at about the 45 minute mark. While there is a core narrative that runs through the film, Boys in the Trees does stray off that intended path a little too often, with certain scenes standing out as lacking context or impact within the greater story (namely, a graveyard stint with the teens getting high on ‘nangs’).

Nicholas Verso has created a solid film about boys growing up – in fact, it works as a notable companion film to Girl Asleep. Where that film could have been twenty minutes longer, Boys in the Trees would have been better serviced by trimming a good half hour to create a more powerful film. Solid performances strengthen the core story that is brought down by a bit too much nostalgia.