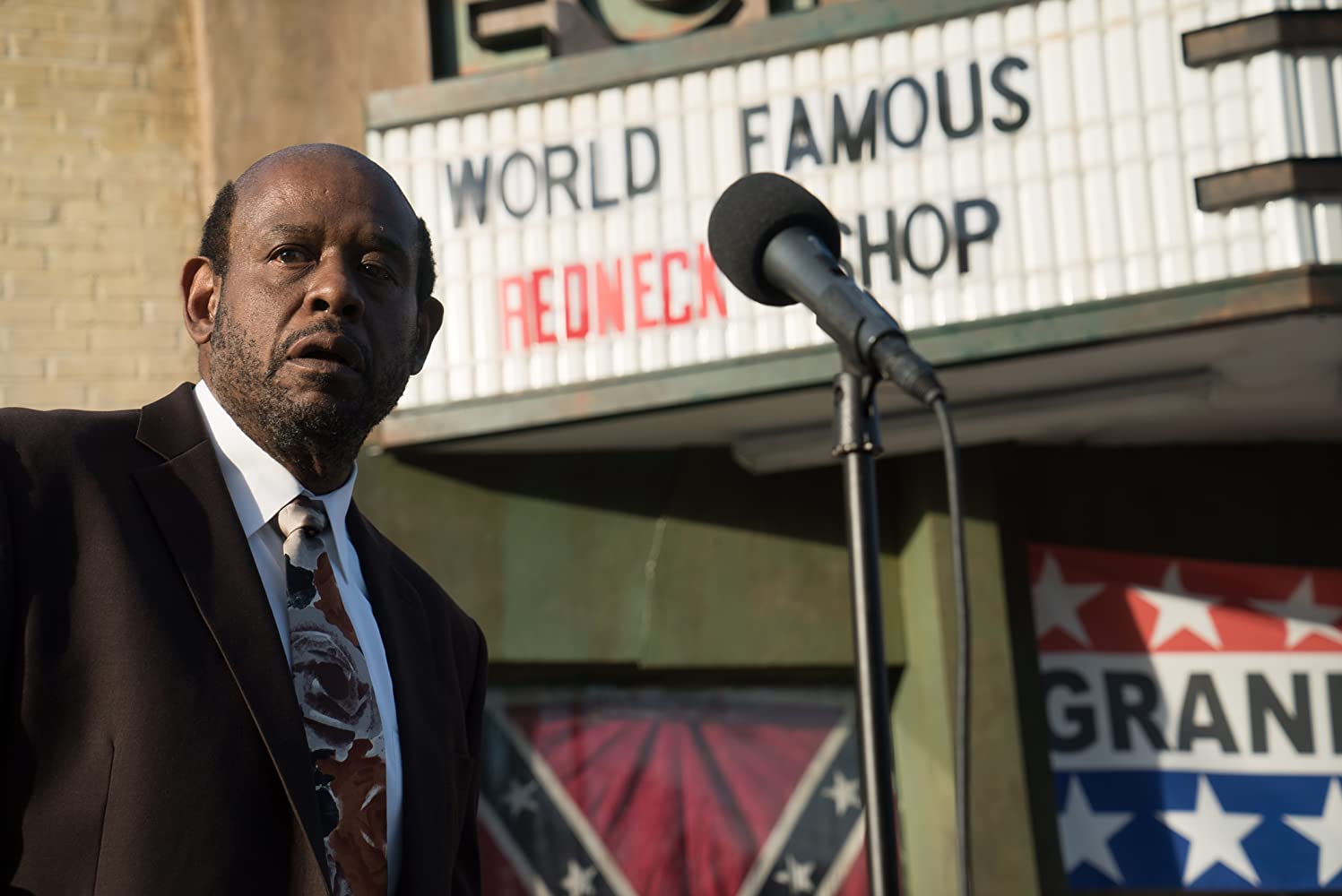 I cannot stress how much of a struggle it was for me to get through this movie.

Burden centres around Mike Burden, a prominent Ku Klux Klan member who opens a KKK Museum in a South Carolina town, but after falling in love with a single mother, and forming an unlikely friendship with an African-American Reverend, he has to choose between the clan, or his new family.

To start off with, the cast was great.

Mike Burden is portrayed by upcoming Australian film Dirt Music star Garret Hedlund, and I don’t think he missed a beat. I have no idea how a redneck from South Carolina is supposed to sound, but Hedlund’s accent was fantastic. His physical performance was just as good too. From violent, dedicated KKK member to docile, caring, accepting family man. You can see the physical change in Mike through Hedlund’s performance. Overwhelming anger, to an overload of confusion, and finally an acceptance of change.

The way the film portrays Mike is also well done. He’s a violent racist and I should have no good will for him at all, however, for emotional impact at least, Burden goes to a great effort to make the audience empathise with him. For me, it pulls all of those feelings out of my head with clenched fist when he begins to get violent, only to mess with your emotions for another hour or so.

Andrea Riseborough plays Judy, Mike’s love interest and motivation for change. She challenges his views at every point she can. Riseborough is great in the role, creating a redeeming factor in a film that is filled with some really horrible characters. Her young son is another Mike motivator, being a sudden parent changes you (trust me, I know) and it forces Mike to see things differently.

Forest Whitaker plays Reverend Kennedy, a man who truly believes in second chances, and that change is possible. After at an uneasy relationship is forced between Kennedy and Mike, it slowly turns to a friendship. I don’t need to speak about Whitaker’s performance, its Forest Whitaker, he is an Academy-Award winner after all.

Playing the villainous Tom Griffin, the KKK’s Grand Wizard, is the ever-reliable Tom Wilkinson. As with Forest Whitaker, need I say more? Griffin is a kind-of father figure to Burden, but not the good type. He’s the kind to teach you to ‘hate yourself and blame it on black people’ type. Wilkinson is perfect for the role, sneering and manipulating his way through Burden’s brain.

Usher Raymond (editor: yes, the Usher) supports as Clarence Brooks, a childhood friend of Mike’s that he reunites with, before he was taught to be a racist. Usher gives his best here, proving he’s come a long way since In the Mix. People remember.

Overall, the entire cast was fantastic.


But being in Australia, I really don’t know much about the KKK. I know they are white supremacists, and go after black people, but as to what they do when they are not hunting African Americans, I am a bit ignorant. So, some scenes in the film confused me slightly, scenes of KKK members dining happily in an Indian restaurant just didn’t quite make sense, however, given that that the Indian waiters were in their service, maybe it was just right? Either way, the scene felt strange to me, even with it had its place in the film.

The film was well written by experienced actor come first time writer/director Andrew Heckler. The dialogue in the film are at times devastating, but well delivered. Some of the scenes he has written derive feelings that they were clearly meant for, and I think he did well in that respect.

Hearts and Bones Review – A Rare Thing: A Moment of Healing

Heckler’s direction was good, with this being his first time in front of the camera, proving that the effort has not gone to waste, with him certainly knows how to handle the back end. He’s crafted a film that purposely illicit emotions at every turn and the cast has delivered on every line.

It was a truly hard film to watch, the emotional rollercoaster was intense. I have been on the receiving end of racism numerous times, and I absolutely hate it, so Burden really hit some spots, and considering the relevance of the film with the Black Lives Matter movements, there was a bit of a double whammy.

Burden might not be a film that made me feel all warm and fuzzy inside, but I am glad I watched it. It was a very well performed drama about second chances, and if there was ever a time to believe that people can change for the better and be given a second chance, that time is now. #BlackLivesMatter