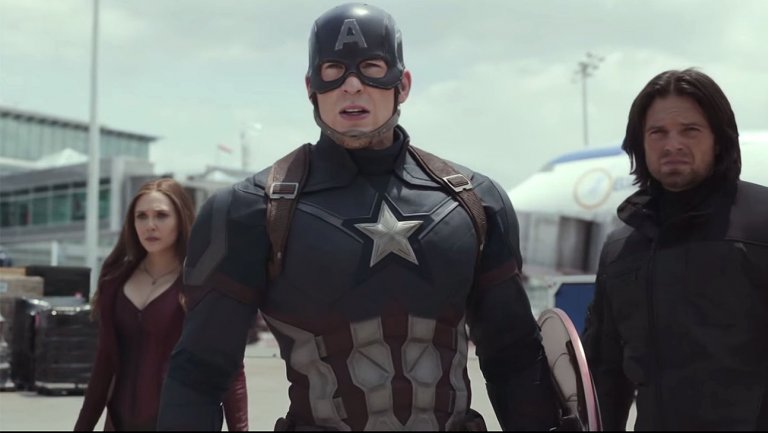 Where Joss Whedon’s first Avengers film felt like the natural culmination of years of stand alone superhero films, Captain America: Civil War is the straw that breaks the camel’s back in regards to the destruction within that film and others in the Marvel cinematic universe. In the realm of ‘natural progression’, this is the most logical step forward for superhero films – who is accountable for the death and destruction caused by the perceived heroics of these decidedly super-human folks? Is the loss of a few tolerable in the bid to save many? If all this band of avengers do is avenge for the villainous actions seemingly spawned by their existence, then when will they start defending? Who out of the many is willing to take responsibility for their actions?

For the first time in the long line of Marvel films, there is a logical through line of the events from previous films flowing into the events of this film. This is not a film created by the nuggets left for patient audiences as post credits teasers; this is a film that addresses what has come before and what will go forward following these events. No longer are the citizens and governments of earth willing to accept the wanton destruction brought to their front door – especially all the while real, human based wars rage on around them. They want the superhero ‘vigilantes’ to be accountable for their actions, and that’s where the Sokovia Accords come into effect. Created as the direct result of the destruction to the fictional European country Sokovia, this international legislation will essentially make characters like Iron Man and Captain America answer the American military.

The Russo Brothers once again take the reigns here as directors, while writers Christopher Markus and Stephen McFeely tackle scripting duties. Where Joss Whedon’s catch phrase friendly scripts fuelled the massive team up Avengers films, Markus and McFeely sway more towards grounded, relatable characters with Civil War. One could call this entry in the eternally undying saga that is the Marvel Cinematic Universe The Avengers 2.5, given the plethora of characters on offer here. While the core story does help wrap up the plots from the previous Captain America films, it also manages to neatly tie in the events of the previous films in a realistic and surprisingly unforced manner.

Propping up the many ancillary characters are Avengers mainstays Iron Man and Captain America. Both Robert Downey Jr. and Chris Evans respectively have had enough films to build these characters and morph them beyond being simple facsimiles of their page bound versions. Downey Jr.’s Tony Stark/Iron Man had reached a point where he was quickly becoming stale – he would grow as a character, only to very quickly revert back to being a genius man-child. That genius man-child still exists here, but wisely, he’s actually grown into becoming a reflective person – looking not only at the loss of his parents and how that shaped him as a person, but also at who he is as a ‘hero’ and what being Tony Stark/Iron Man truly does to himself, and those he is trying to save. While we have previously seen Tony Stark take steps towards distancing himself from the weapons his company once created, he himself as one of the few truly human characters within the Avengers, has to come to grips with the idea of himself as a weapon.

Previous Marvel films have tackled themes that have felt decidedly un-superhero-esque – such as the theme of parenthood, loss and separation in Ant-Man – but they have sometimes felt shoe-horned into the action, often being forgotten about within the climactic moments. Captain America: Civil War is the most coherent blend of action, themes and character development within not only a Marvel film, but also within the entire ‘superhero’ genre as a whole. For the ‘superhero’ genre to grow as a form of entertainment, it needs to push at the boundaries it has created for itself. It needs to bend the ideas of what it is to be a superhero and to warp the expected three act structure into something other than waiting for the next set piece.

Captain America: Civil War manages to do just that with the themes of taking responsibility for one’s actions; the theme of what it means to be a weapon of destruction. These are deep, immersive themes that bring forth thoughts that (for me at least) previous Marvel films have struggled to do. The cause of the creation of the Sokovia Accords is the devastation of another attack in a foreign country – this time one where the enemy detonated themselves with a suicide vest. A subsequent attack involving Captain America’s lost friend Bucky Barnes aka the Winter Soldier spurs on a manhunt to track Barnes down and bring him to justice. Barnes himself is struggling with the knowledge that he has been brainwashed by the Nazi cult Hydra, and unwillingly been turned into a weapon. Captain America fights for Bucky’s innocence, after all he understands what it means to be created as an instrument if war.

Furthermore, the subject of acceptable damage when protecting the world comes into question as well. Is the loss of a few worth the saving of many? How does one who has been designated to protect the world deal with the collateral damage created by their seemingly heroic actions? Especially when something like an act of a terror causes destruction and devastation beyond their control. Real world issues being dealt with by comic book characters can appear crass, especially in regards to a suicide bomber – but, jars of piss and Jolly Ranchers chewing villains this is not. The great writing helps surpass an possibly issues that may arise from dealing with such subjects.

There is a fascinating exploration into the aspects of grief with Elizabeth Olsen’s Scarlet Witch, who after repeated trauma and an accidental death, is locked up ‘for her protection’. She is, after all, someone who unwillingly became a villain, created to destroy the Avengers. Her realisation to use her abilities for good, not evil is natural, especially when paired with the sentient artificial intelligence that is Paul Bettany’s Vision. The interactions between these two characters provide the film with some of the most entertaining moments – especially when you take into consideration the very ‘intelligent’ costume design for Vision.

It’s a testament again to the direction and writing that Spider-Man doesn’t feel like he’s shoe horned into this epic saga simply to boost box office sales. Tom Holland is simply wonderful as both Peter Parker and Spider-Man, embodying the wonder and excitement of seeing Captain America and Iron Man in the flesh. Paired with Paul Rudd’s Ant-Man, these two characters become the audience conduit for either side of the all-timer battle at a vacant airport – both exhibiting astonishment at what’s going on.

Tony Stark’s mentoring of Peter Parker feels like the natural opposite to the nefarious creation of the Winter Soldier. While Peter wasn’t created, he does have just as destructive abilities, making Stark’s desire to help Peter mould those abilities into being used for good. This is not only empowering for Peter as a character, but exciting for the progression of both characters in future films.

Less assured however is the ‘villain’ of the piece – Daniel Bruhl’s Baron Zemo. Fueled by revenge, Zemo is again another poorly constructed Marvel villain. His motivation is logical, but in an already packed film, he feels extraneous, being mostly useless up until he’s required to help launch the third act. He’s made even more redundant when you consider the presence of Chadwick Boseman’s Black Panther, a similar character fueled by revenge and one that would have an understandable desire to see the Avengers disappear in a cloud of infighting.

Joker Review – Empathy for the Devil

If there is a criticism of the film, it’s that Marvel have still managed to create an over bloated affair with just a few too many characters. While Black Panther is a great character, there is little reason for him to exist in this film except to set up the upcoming Black Panther film. This is made even more prominent by the fact that many characters share the same theme and through line within their own arcs – as mentioned, Zemo and Black Panther’s arc follow similar trajectories. It’s disappointing to see that Black Panther wasn’t implemented as the enemy of the piece with a gradual realisation that his actions aren’t the right path to take.

The score by Henry Jackman lacks impact when needed – another eternal hurdle that Marvel are yet to clear. Yes, the Avengers theme pops up for a few bars here and there, but once again, there is no discernable theme for the character of Captain America, or a notable Iron Man theme. It often seems like a small element to complain about, but take away Indiana Jones’ theme and he suddenly loses his shine a little. Darth Vader without the Imperial March is just a man walking down a corridor.

Captain America: Civil War may not be the monumental landmark film that the superhero genre needs. It doesn’t rewrite the rulebook, it just creatively interprets what the rules are. Yes, it’s wonderful to see Spider-Man finally reunited with the characters he’s shared comic book pages with many times over, and thankfully, he’s given the ability to share a great action set piece. This is a great, enjoyable film that fortunately doesn’t require the viewing of the previous twelve films in the series to understand what’s going on.