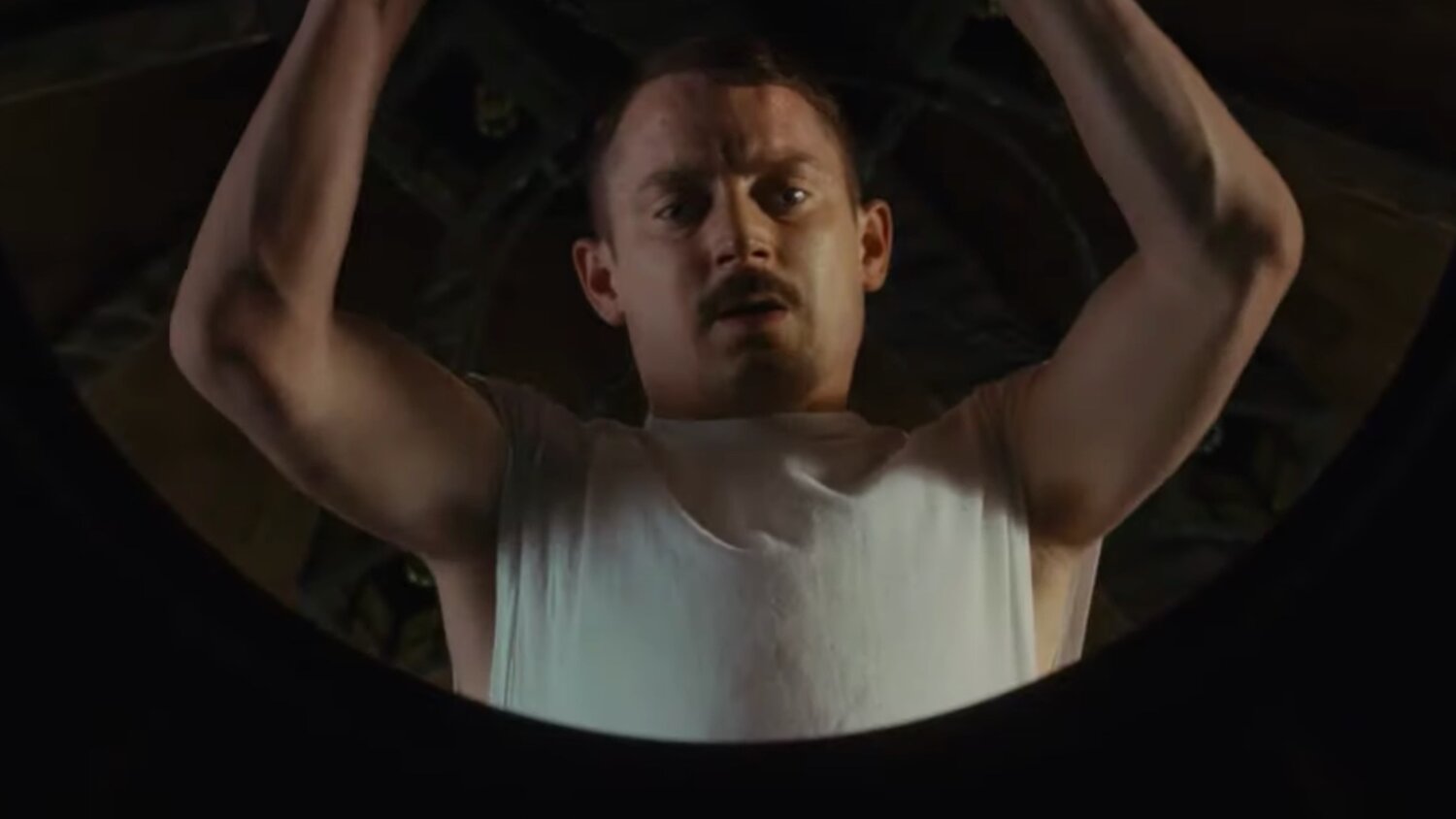 Every first sentence I’ve tried to write for this review I have ended up deleting in frustration. I don’t know where to begin with New Zealander Ant Timpson’s first full length feature, because I don’t know how to best write about what the film was trying to express. If I were to try to find the perfect beginning, the gateway to the film, I would never be able to write this review – so I am just going to jump in at the deep end and start with a suitable colloquialism when dealing with Come to Daddy, and that is, what in the actual fuck did I just watch?

The film opens with twinned quotes from Shakespeare and Beyoncé, both referencing fatherhood. These quotes act as an apt representation of the high/low brow visual spectacle the audience is about to experience. Come to Daddy is a knowingly postmodern film that wears its references so wholly on its sleeve that it may as well be any number of slasher comedies made over the past thirty years. However, somehow it just misses the mark of being funny or gory enough to be more than a weak homage to the genre.

The story is as follows; Norval Greenwood (Elijah Wood) receives a letter from his long-estranged father asking him to come to visit his idyllic beachside home in what we assume to be outer California (in reality, the principal filming was done in New Zealand and Ireland). Norval has been struggling trying to find his place in the world. He’s in his late thirties and still living the high/low life in Beverly Hills in his mother’s mansion. He’s desperate to be part of the influencer cum art world – but as the film progresses it becomes clear that he has failed to find a footing in the “in crowd” scene. All he really has to show for his life is a ridiculous haircut, a struggle with alcoholism, and a flashy way of showing his wealth and privilege which includes his luxury goods and solid gold limited edition “Lourde exclusive” iPhone.

When Norval arrives at what he assumes to be his father’s home he meets Gordon (Stephen McHattie) who seems rather less than pleased to see his son. Gordon is an abusive alcoholic and delights in humiliating and undermining his clearly fragile ‘son’ Norval. It takes him only a few conversations to pin down that Norval is a mess of anxiety and failure and he picks at him with brutal relish. Norval is utterly bewildered by Gordon’s treatment of him. He cannot fathom why his father would call to him with such a loving letter and then act in a way that is so antithetical to the hopeful bonding that the letter implied.

Tensions between the two men escalate with Gordon calling out Norval’s effeteness and impotence devolving into a murderous rage against him. Gordon attempts to murder Norval with a meat cleaver and drops dead from a heart attack in the attempt.

The second act, the aftermath of Gordon’s death, is the strongest part of the film. Two of the best characters arrive in the form of the police chief Ronald Plum (Garfield Wilson) and coroner Gladys (Madeleine Sami – writer, director and star of the New Zealand indie comedy hit The Breaker Upperers). Ronald Plum’s hilarious quip when interrogating Norval about Gordon’s death is one of the best lines in the film. Ronald looks into Norval’s eyes and determines that he is innocent, because his big blue eyes speak the truth. Unlike Gordon’s eyes which are unlike Norval’s – “I’m kinda breaking the fourth wall here, but I have this theory: bad guys have eyes that look like raisins. Small and dark, you know?” This quip pays off later when we realise that Gordon wasn’t Norval’s father at all.

Gladys is a kind but weary widowed coroner who takes a little pity of the clearly fish-out-of-water Norval. She counsels him to find a way through his grief and confusion by perhaps speaking to his father in a way to find resolution. In a deus ex machina Gordon’s corpse is left at the beach house for Norval to deal with which sends him spiralling back into drinking and making inappropriate booty calls to Gladys.

All of the bizarre occurrences are throwing of Norval’s Zen, which is shown when in a fit of pique he throws his copy of The Celestine Prophecy into the ocean in pique. Adding to his confusion is the unrelenting banging in the house. Is it the unquiet spirit of his father or something else? It’s here that the film begins to lose its way and become a trope ridden mess. In searching for what is causing the uncanny sounds Norval finds a photograph album with picture of Brian (Martin Donovan) his actual father, and it begins to dawn on him that the banging isn’t supernatural at all.

Norval finds the blue-eyed Brian (there’s the call back) chained up in an oubliette like basement in the house. Brian reveals that he was a part of a crime syndicate that kidnapped a young girl in Asia, and that was what has been funding his lavish lifestyle with his mother for all these years. Brian also reveals to an increasingly mortified Norval, that he’s going to have to kill at least two people for them both to make a clean escape. For the earnest and fey Norval, the idea is not only horrifying, it is impossible.

The basic problem with Come To Daddy is that it’s not entirely sure what it wants to be. It isn’t really a horror film, because there isn’t much of a sense of dread. It really is far more a slasher comedy, with elements of sincerity that seem out of kilter with the central premise of the film. Whilst I give kudos to Elijah Wood for choosing outré roles instead of playing it safe, it feels like sometimes he’s trying too hard to shake off his The Lord of the Rings Frodo persona. His choices in roles post Jackson’s immensely successful trilogy have proven that he doesn’t play to type; considering his two biggest roles post the trilogy were as the incredibly creepy Patrick in Michel Gondry’s Eternal Sunshine of the Spotless Mind and the mute cannibal serial killer Kevin in the Frank Miller/Robert Rodriguez/Quentin Tarantino film Sin City. Martin Donovan is respectable as Brian, and I am always happy to see him back on the big screen where he belongs.

Ultimately I can see the appeal of Come To Daddy for a certain audience. If I consider my viewing habits over the years I really should have been the prime target for the film, yet it just didn’t land for me. I thoroughly recommend A Field Guide to Evil on which he acted as a producer. The anthology film showcases some of the better directors working in horror and folkloric unease in the business, including Peter Strickland and the directorial team Severin Fiala and Veronika Franz of Goodnight Mommy and The Lodge fame.

Writer: Tony Harvard, (based on an idea by Ant Timpson)