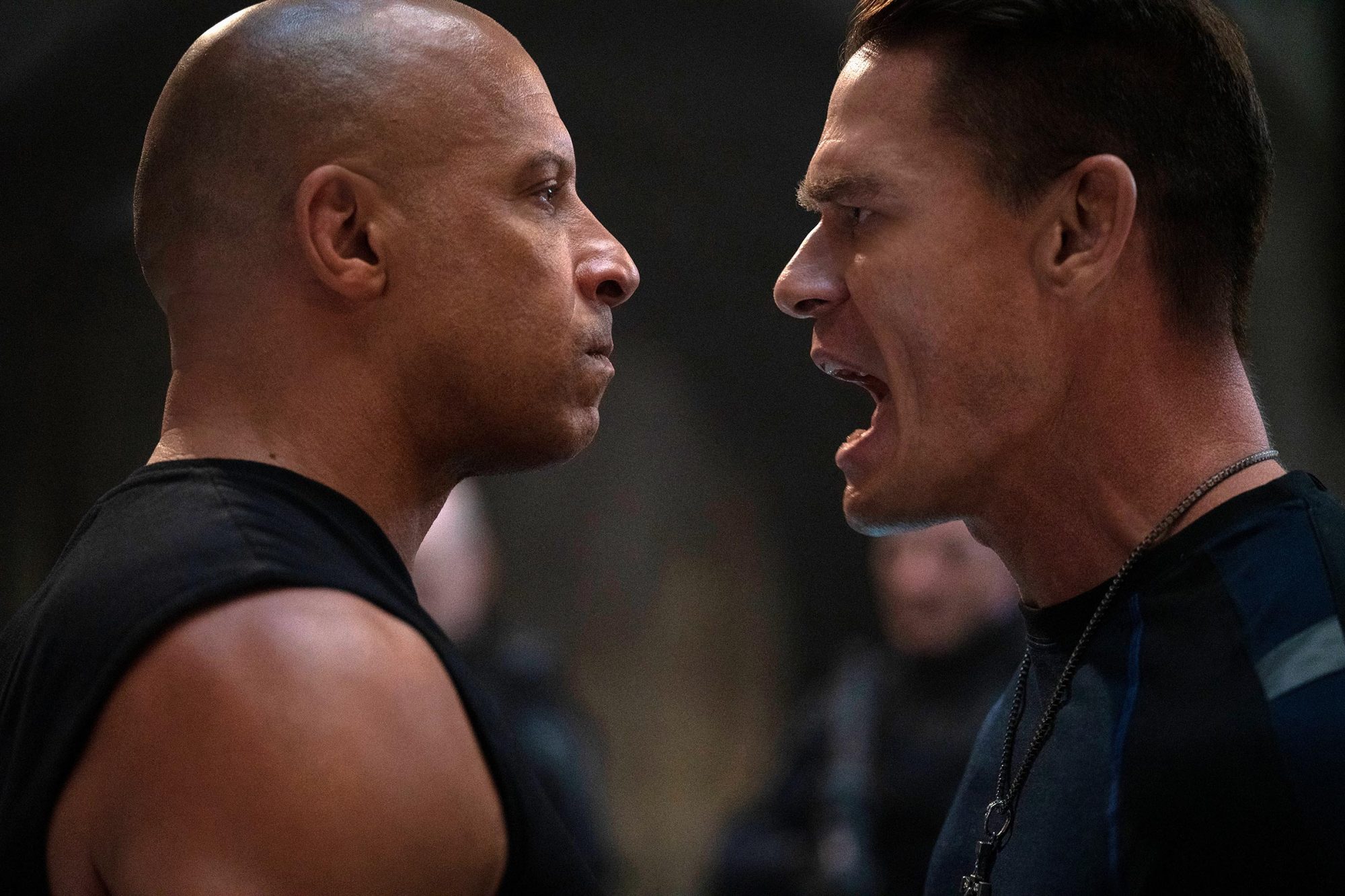 
I audibly sighed when I sat down to write this review.

The Fast & Furious crew are back for another outing in this inexplicably endless franchise of “dumber than a bag of hammers” action movies that have remarkable diversity in their casts and crew, make billions of dollars, and yet I can’t stand a single one.

Fast & Furious 9 or Fast 9 or F9 (why do these movies always have at least two titles) is directed by long-time franchise helmer Justin Lin who returns after his last entry 2013’s Fast & Furious 6. In his absence, the franchise has experienced horrible tragedy with the loss of Paul Walker and a serious identity crisis in 2017’s The Fate of the Furious. The typical Vin Diesel-led melodrama starting clashing wildly with Dwayne Johnson’s over-the-top energy that became self-aware at times. It was obvious that the producers were more interested in potential spin-offs rather than the main plotting that usually drives these movies.

I, as someone who doesn’t like any of them, REALLY did not enjoy Fate, so I’m happy to find myself feeling that Fast & Furious 9 is much more consistent in its tone and focus, and that is definitely because of Lin’s return as director. He built what this franchise mostly is now and knows exactly what it needs to do in order to survive future instalments.

From the very beginning, things feel different. We open with a flashback set in 1989. A young Dom Toretto (Vinnie Bennett) is working in the pit crew for his father’s racing team, assisted by younger brother Jakob (Finn Cole). Their father then dies in a flaming wreck, something mentioned in the very first movie in 2001. As the rest of the present-day movie goes on, we cut back to more flashbacks of these two brothers clashing with one another over Jakob’s possible responsibility in their father’s death, leading to a climactic car race which splits them apart forever. All of these scenes became, by far, some of the most interesting storytelling in the entire franchise. The writing is solid, Bennett and Cole’s performances never veer into caricatures and instead portray these young men as tormented kids, and Justin Lin and cinematographer Stephen F. Windon shoot the flashbacks on film as well. The climactic race between Dom and Jakob uses minimal CGI, something that made previous racing scenes look fan-made, and I found myself emotionally invested in their story. If there should be a spin-off of anything, I would love to see a full movie of these younger characters in this grounded and efficient style that Lin employs.

But that great part of the movie is only about 10 minutes of the 2 hour and 25 minute runtime. So what about the rest of the movie?

What can I say other than it is mostly the same Fast & Furious thing, different day. Dom (Vin Diesel, more dead-serious than ever) and his team of racers and mechanics turned international super spies have to get a thing to stop a thing and blah blah blah. Does it matter? It’s a dumb ball that does some technobabble nonsense, John Cena rocks up as Dom’s long-lost brother Jakob, Han Seoul-oh (Sung Kang) returns for some logic-stretching reason, and Charlize Theron’s Cypher is back from the last movie with an even dumber hairstyle.

I would say that most fans of this series have never paid attention to the plot beyond “okay, what can they blow up next?”. This franchise is not known for intrigue and complex storytelling. You want to see stuff smash into other stuff.

In that regard, the movie certainly delivers, but once again I found myself glazing over at every action sequence that seems to go on for 5 minutes too long. The set-pieces have more effective choreography and coherent editing than the last couple of F&F movies, but if you’ve literally lost the plot behind them, then it just becomes masses of meat, steel and concrete colliding with abandon.

Watching this movie is like watching a blender. All of these weird and disconnected ingredients are put in at random, making you think this won’t turn out so well. It doesn’t. And then you have to watch it all be disintegrated and mashed together into a singular paste of nonsense, complete with a deafening noise that stops you hearing your own thoughts. The result is…interesting, to say the least.

Maybe I truly am the wrong person to ever review these movies, because I honestly cannot disconnect my brain from logic and reason. These movies demand that you ignore physics and basic intelligent comprehension, and I just can’t. Every single character should be dead a thousand times over in every action scene, and every reason the filmmakers come up with to explain why they aren’t is laughably bad. How can Vin Diesel fall 100 metres down a missile silo, land in a pool of water, go unconscious, survive all of that and still be able, all 100 kg of him, to be carried out of the water by Michelle Rodriguez?

I’m asking questions that fans of the franchise freely ignore because they see these movies as pure, dumb fun, and that’s okay.

Justin Lin and Daniel Casey as screenwriters do a better job than franchise stalwart Chris Morgan (who I suspect might be a 16-year-old car nerd), but some of this dialogue, mostly between Diesel and Rodriguez, made me want to swallow my own teeth.

Jordana Brewster shows up for another logic-stretching reason, and has one rather nice scene with Michelle Rodriguez, which Rodriguez had requested seeing as their characters only said one word to each other beforehand. They said “hi” in one of the first scenes of the first movie and that’s it, so it’s fair that an actor would want a little more. Their conversation is sweet, and after that they go right into a pretty solid hand-to-hand action scene where no-one is pulling punches. Great work from all involved.

Nathalie Emmanuel’s Ramsey gets more to do than sit behind a laptop and spout technobabble (or get the over-sexualised treatment in one terrible scene in Furious 7). She is forced to drive during an action sequence, which works quite well because she doesn’t know how to. It’s that kind of humorous beat that made me chuckle. And that’s rare for this franchise.

Tyrese Gibson and Ludacris’ characters, once again, have the most crowdpleasing storyline and dialogue of the whole movie, catching up with the Tokyo Drift trio of Lucas Black, Jason Tobin and Bow Wow. With these characters together, Gibson and Ludacris end up doing something fans have wanted for a while now. No spoilers, but…they go there. And it’s the dumbest thing this franchise has ever done.

Sung Kang coming back as Han makes no sense and feels like the filmmakers trying to open up holes in an air-tight seal, but dammit if Kang isn’t as charismatic and entertaining as ever. I like the character, I like the actor, so whatever I guess.

It’s also good to note that as Justin Lin has returned as director for a Fast & Furious movie, he brings with him not only Sung Kang who was in Lin’s breakthrough film Better Luck Tomorrow (which has retroactively become Han’s origin story), but the silly trio from Tokyo Drift where Lin made his start in this franchise. It’s a reunion on and off-screen and that’s nice.

Even John Cena turns out to be quite an effective addition to this series, as he brings the right blend of testosterone-fuelled physicality and self-aware charm. Charlize Theron is hamming it up just as she did in Fate, and Helen Mirren, self-confessed fan of the franchise, gets to do some slick driving with Diesel in the passenger seat, so that’s a good switch of expectations.

As I said, Fast & Furious 9 is much more consistent than Fate of the Furious, but I still didn’t like watching it overall. Every action scene pummels you into submission, the massive finale descends into hilarious incomprehension which happens in every movie, and I just don’t care about any of it. I don’t want to heap too much praise on any individual elements or storylines because those might just become unnecessary spin-offs that do not work.

I can watch dumb movies that go over-the-top with action or absurdity, but I find myself enjoying those slices of ridiculousness like the John Wick franchise and Bill & Ted because there is genuine emotional investment that can interest me. The only emotional investment one can find in these movies is with Dom Toretto’s storylines and because Vin Diesel is a weak actor, this is always the worst part of any of these movies.

If you enjoy the franchise, then Fast & Furious 9 is for you and this review certainly isn’t. It is not for me, I don’t want to watch any more, and the only reason I keep coming back is the team at Universal Pictures Australia do great work with these screenings. So that’s nice.

Anyway, go see it if you want. Ride or die, quarter mile, family family family, all that nonsense. I need a nap.