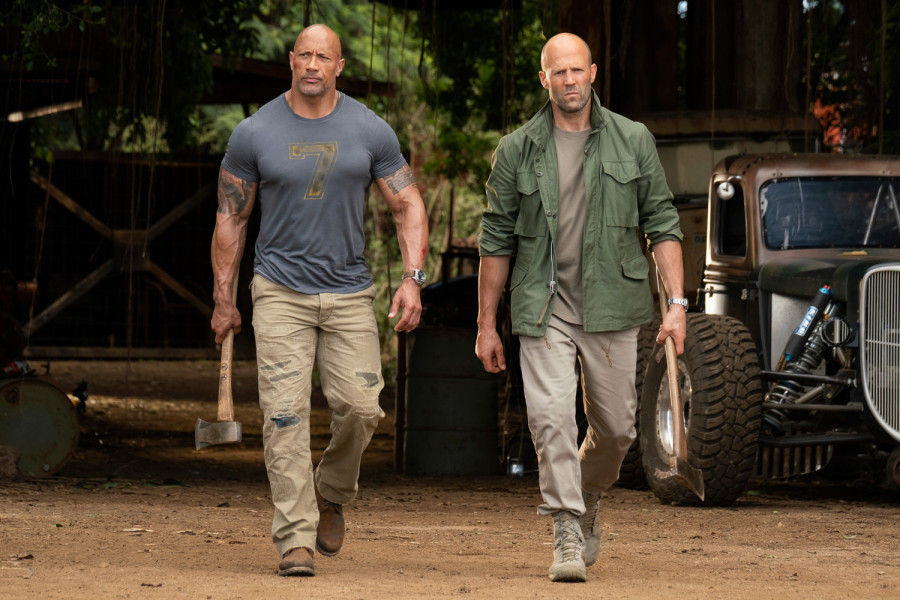 We’re eight films deep in the main Fast & Furious franchise, and thanks to some off screen squabbling between series headliner Vin Diesel and franchise kick-starter Dwayne Johnson, we’re now presented with a timely spin-off flick to satiate revheads til the next main instalment rolls around. Johnson’s giant walking bicep Hobbs is joined by one time villain and 100% Han killer, Shaw (Jason Statham), to help track down a MacGuffin the comes in the shape of Shaw’s sister Hattie (Vanessa Kirby). Meanwhile, walking straight out of the Crysis video game series is Black Superman aka Brixton (Idris Elba), a computer enhanced, bullet proof super soldier villain who believes he’s the next step of evolution. There’s also a motorcycle that makes that Transformers transforming sound and a bunch of cars too. This is Fast & Furious Presents: Hobbs & Shaw.

Directed by Atomic Blonde and Deadpool 2 guru David Leitch, this new flavour of Fast & Furious is decidedly bland and slap dash. You can almost hear the hurried shuffling of paper off screen as studio execs rush to get another tentpole flick out there for Universal after an unexpected delay for the next Fast & Furious entry meant it won’t be released til 2021. In a world where perpetual film series roll on every five minutes, a four year gap between entries for a multi-billion dollar franchise means stagnation and certain death. So, here we are with a stop gap flick that has a plot that was most certainly written for a completely different film.

Which is possibly why this is so desperately obnoxiously bland. Every moment is feels paint by the numbers, like an petrol heads version of an adult colouring in book, designed to help tune out the world and numb the brain a little. Through all the loud guitar riffs and CGI-heavy explosions, I couldn’t help but wish I was being sold something. I yearned for a shot of a Corona, but instead was given a few fleeting glimpses of the badge of a McLaren instead. Foolish me though, because the film wasn’t trying to sell me anything at. I didn’t realise til the closing credits that the film was the advertisement. This is one notch away from Morgan Spurlock’s POM Wonderful Presents: The Greatest Movie Ever Sold – you’re not here for characters or plot or even action, you’re here to be sold a product that ties you over til the next product arrives. ‘Oh, this one has added Ryan Reynolds! Ah! Unexpected Kevin Hart!’ These nuggets of cameos are what turn this film from entertainment into a variety show. It’s all song and dance and razzle dazzle and that’ll be fifty dollars for the popcorn and soda please make sure to turn your phone off and enjoy the ride.

Everything in this film is an establishing shot followed by interiors. It’s clear that they’ve only got an actor for a day – which has become an inherent problem with the Fast & Furious series, given it became painfully clear in Fast 8 that they could only manage to get Charlize Theron for a handful of days and that Vin Diesel and Dwayne Johnson were never on set at the same time. For all the digital trickery and hand waving, the one tangible element that makes these films shine – the actors – are painfully underutilised and any sign of chemistry goes out the window. Sure, Helen Mirren and Ryan Reynolds can mug for the camera all they want – they are major stars for a reason – but their fleeting appearances can’t help but feel as if they’re giving the film more energy than it deserves.

When the film has to rely on its two big names stars, it struggles to give them the material to make the wannabe catchphrase dialogue shine. Jason Statham and Dwayne Johnson, under the right guidance, have charisma for miles, but David Leitch struggles immensely to draw any of that out of them. I yearned for the guidance of Jake Kasdan or heck, even Paul Feig who managed to subvert the action genre, and in turn, Jason Statham’s ethos, so well with Spy. This entry certainly feels like it’s trying to subvert the Fast & Furious format by instilling a lot more humour into the mix, and while that should work, it merely ends up playing out like endless riffing about dick jokes. Any more talk about balls or allusions to the size of Johnson or Stathams dick, and I’d start to be asking myself if I was watching a commercial for a men’s health clinic. (Men, if you are reading this, get your prostate checked, tell your dad and grandfather to get their prostates checked. Talk about men’s health. You’ll be better off for it.)

Then, there comes the staple theme of the Fast & Furious series – family. Sorry, that’s capital F, Family. Naturally, there’s endless talks about the importance of family, with everybody (including the villain) being called brother. Yet, oddly, when all this talk of family comes out of Statham and Johnson’s mouths… it falls flat. Not that Diesel could sell the lines any better, but he at least committed to dialogue like ‘I live my life a quarter mile at a time’. Statham and Johnson sure as heck try their hardest, but it is stilted and unbelievable. But, when Statham, Vanessa Kirby, and for a very fleeting moment, Helen Mirren, get together as a family as the credits roll, there’s a spark there – you can’t help but wish that the next Fast & Furious Presents film is one focused on this family and is called Shaw Thing.

Yet, and this is a big yet, with all of the foibles and blandness in this entry, the climax absolutely kicks the fake nuts off any ute in the carpark. It’s quite simply one of the best action sequences in the series. With the Hobbs family at home on Samoa as a last resort to help stop the unstoppable Brixton from getting the MacGuffin, the scene is set for an all-out brawl with hand to hand combat and bombastic explosions, plus one heck of a mad chase sequence involving multiple rickety cars and a helicopter. I’d never thought I’d long for the sight of a troupe of thong wearing Samoans driving rust buckets and battling a super soldier in a helicopter, but here we are, a genuinely exciting, thrilling sequence that not only feels tangible, but also feels like it has some kind of weight and relevance. If Hobbs & Shaw was two hours of that, then it’d be one of the best of the series, but as it is it’s middle ground stuff that’ll fill your Sunday afternoon just fine as you drift in and out of a hangover nap.