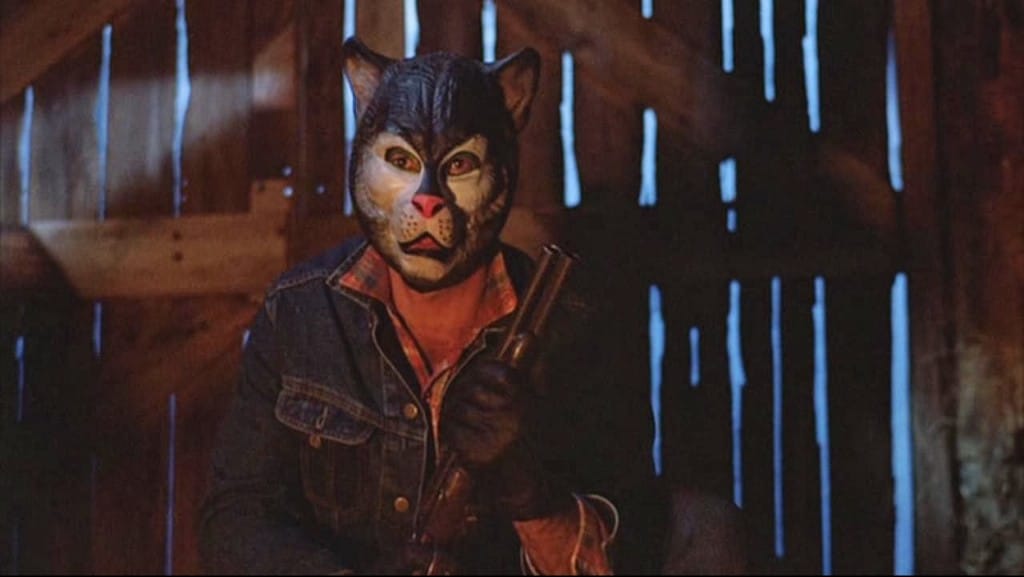 Actor and filmmaker Rachel Ward is currently collecting praise and criticism for her second feature film as director, the boomers-on-a-weekend-binge dramedy Palm Beach, which opened the Sydney Film Festival this year and will soon get an airing at Western Australia’s CinefestOZ, where she is also serving as Jury Chairperson (Palm Beach is not, it should be noted, in competition).

Almost 35 years ago it was a different story. Ward was sharpening spears, brandishing a sawn-off shotgun, and leading a small band of schoolyard savages who would have fit right in at William Golding’s Castle Rock against a quartet of murderous, cartoon-masked kidnappers. She was the big name upon which co-producers Crawford Productions and HBO hung the budget of the uneven but admirable 1985 Ozploitation thriller, Fortress.

This was the done thing at the time, and still is to a certain extent today; foreign talent such as Monica Bellucci and Ioan Gruffudd help to ensure the overseas viability of local product like Kiah Roache-Turner’s Nektrotonic and Steven M. Irwin’s Harrow, while back in the day Jamie Lee Curtis and Stacy Keach did the same for Richard Franklin’s Roadgames (1981). Ward, who was brought in at the last minute to replace original actress Sigrid Thornton when she fell pregnant, not only had the requisite international profile to pacify the money (landmark miniseries The Thorn Birds had made her a household name), her status as an Australian resident (recently immigrated from the UK) mollified Actors Equity, who were bucking for a local in the lead.

Her plummy Received Pronunciation delivery and delicate, nigh fawn-like physicality also lent the production a degree of refinement and gentility – indeed, the only skerrick thereof to be found in what is otherwise an unrepentantly violent and bleak film.

Based on the 1980 debut novel by Australian crime author Gabrielle Lord, like its source material Fortress draws on the real-life kidnapping of a schoolteacher and her charges that took place in rural Faraday, Victoria in 1972. As reimagined by Lord, the kidnapping and subsequent hostage ordeal becomes a much more grueling and bloodier affair, with an attendant higher body count (nobody died in the real world). Further elaborated by Australian journeyman director Arch Nicholson (Buddies, Dark Age, Weekend with Kate), working from a script by genre specialist Everett de Roche (Patrick, Roadgames, Razorback), it becomes positively lurid, but shot through with moments of savage lyricism.

Indeed, Fortress frequently drifts between lanes, at times flirting with arty self-seriousness before retreating back into drive-in schlocker territory, and constantly battling a certain tangible cheapness arising from a rushed and fumbled production schedule (remember, Ward was parachuted in at the last moment), a fairly low budget, neither of which was quite enough to comfortably encompass the extensive location shoot in the Grampians National Park. The performances from the child actors are also wildly variable (although a few future stars, like Offspring’s Asher Keddie and Neighbours’ Beth Buchanan, do well) and there are a lot of them; walking in during the wrong scene and with no context, you could be forgiven for thinking you’d stumbled into some obscure Secret Valley-alike children’s show from the early ‘80s.

Which is to say it’s impossible to appreciate or admire Fortress without qualification, but it is certainly worth admiring. The opening pre-dawn sequence, in which adolescent schoolboy Sid (Sean Garlick) lies in wait with a rifle for the fox that’s been preying on the family livestock, is haunting, all grey light and the promise of imminent violence. The lighting improves, with much of the film taking place in the washed-yellow brightness of the stereotypical outback bushland, but the promise of blood remains; inevitably, it’s delivered upon.

The plot kicks into gear quickly and economically. Alone with the students who attend her single-room schoolhouse, teacher Sally Jones is seized at gunpoint, along with the sprogs, and bundled into the back of a van. Their four assailants are anonymised by cheap masks, and their identities are further blurred by not being able to use real world characters; call them Dabby Duck (Vernon Wells of Mad Max 2), Pussy Cat (David Bradshaw), Mac the Mouse (Roger Stephen), and, breaking the pattern, the rather more familiar Father Christmas (Peter Hehir). The last is the most aggressive and violent, but all are a threat. Although the object of the exercise is ransom, it’s made abundantly clear by the way that the kidnappers leer at some of the older girls that further transgressions are not off the table.

The ever-present sense of sheer menace that pervades Fortress is hard going even by today’s standards. The eerie, smiling masks of the kidnappers, contrasted with their harsh, guttural accents; the sexual element of their threat; the young ages of the threatened children (a handful of teens aside, the students are mostly quite young), and the familiarity of both the classroom and – to Australian audiences at least – the bush setting all combine to make a fairly heady cocktail of suspense. Add to that the metatextual knowledge that anything really can happen in this corner of the genre jungle (go take a look at Mario Andreacchio’s 1986 rape-revenger, Fair Game, to get an idea of what was going on in this space at the time) and there’s something uniquely unsettling about Fortress.

A couple of setpieces really stand out. Nicholson stages one underwater sequence, where the whole class must swim through a flooded cave system in hopes of escape, with bravura claustrophobic intensity. Another sequence, in which the criminals invade a remote farmhouse and force the old couple there to serve them dinner, is absolutely skin-crawlingly tense, a painfully extended study in pure suspense. The occasionally flat performances and TV-level filmmaking that surrounds them actually work to heighten the impact of these scenes; you think you’ve got a handle on what Fortress is doing, and then it sucker punches you with these painfully tense and at times genuinely horrific moments that stand out like diamonds in paste setting.

It all builds to a final act that is simply brilliant in its unsettling savagery. There are no cops in Fortress, no symbols of authority, and the precious few signifiers of civilisation and sanctuary – the schoolhouse, the farmstead – are brutally violated by the kidnappers. Inevitably, Sally must lead the children against their tormentors, and the film cants into Lord of the Flies territory as the kids tap into their own innate atavistic violence to fight back. The class make their own sanctuary in the titular “fortress”, a defensible cave high in the hills, and lay out a methodical and murderous plan to kill the criminals, making spears, digging punji pits, and rigging deadfalls. It feels, again, like an Australian children’s show where the plucky larrikin heroes help capture a ring of wildlife smugglers or something similar, but there’s no talk about capturing or disabling the men – everyone knows they have to die. What’s remarkable – for people who don’t spend a lot of time around kids, at least – is how quickly the group consensus swings to homicide – a few qualms are voiced, but the transition from class to tribe is remarkably smooth. There’s a beautiful moment where the children are slowly chanting “We’ll get the dirty rascals!” over and over again as they warm to their strategy that is just chilling.

Fortress ends on a wonderfully ambiguous note after it reaches its bloody climax. After all the killing is done (spoilers for a movie over three decades old, folks) we cut to denouement scene back in the classroom, where a couple of investigating cops (Nick Waters and Det Terence Donovan) comes to ask Sally a few questions about what happened – the bodies recovered from the fortress apparently have wounds inconsistent with the cover story the tribe has cooked up. As the cops probe, the children silently sneak into the classroom and encircle them threateningly, and the police quickly twig that they should leave. This is disturbing enough, but the final shot of the film shows us just how violent our little Aussie heroes have gotten: the heart of one of the kidnappers, preserved in alcohol, sitting on a bench surrounded by other animal samples in jars. We then dissolve to an image of the rocky fortress itself, an edit that viscerally connects the neat and tidy classroom with the bleached and primal outback landscape through the medium of the grisly trophy. The savagery unleashed in the crucible of the kidnapping ordeal has not gone away.

Fortress is, as noted above, an uneven experience, but its solid, efficient narrative, haunting tone, and lurid violence certainly leave a mark on the viewer. It could be argued that it’s ripe for a remake, and certainly a modern touch working with the benefit of hindsight could make the whole thing smoother and more palatable (if nothing else, the current crop of child actors could do a better job, on balance), but you’d lose something. It’s the unevenness, the roughness, the occasional seams showing that makes Fortress a unique and compelling experience. When it comes up in conversation, those who saw it back in the day immediately start with recognition – and a little apprehension. There’s a reason this fairly obscure ‘80s Ozploitation gem has stuck so strongly in the memories of those who have seen it. It’s a minor classic, and its power to unnerve remains undiminished over three decades later.

Writers: Everett De Roche, (based on the novel Fortress by Gabrielle Lord) 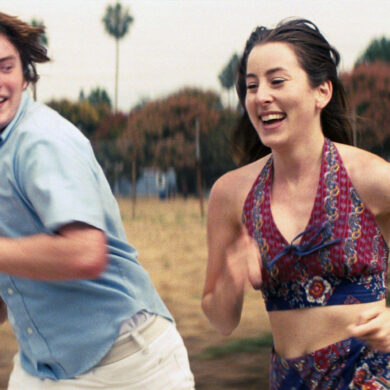