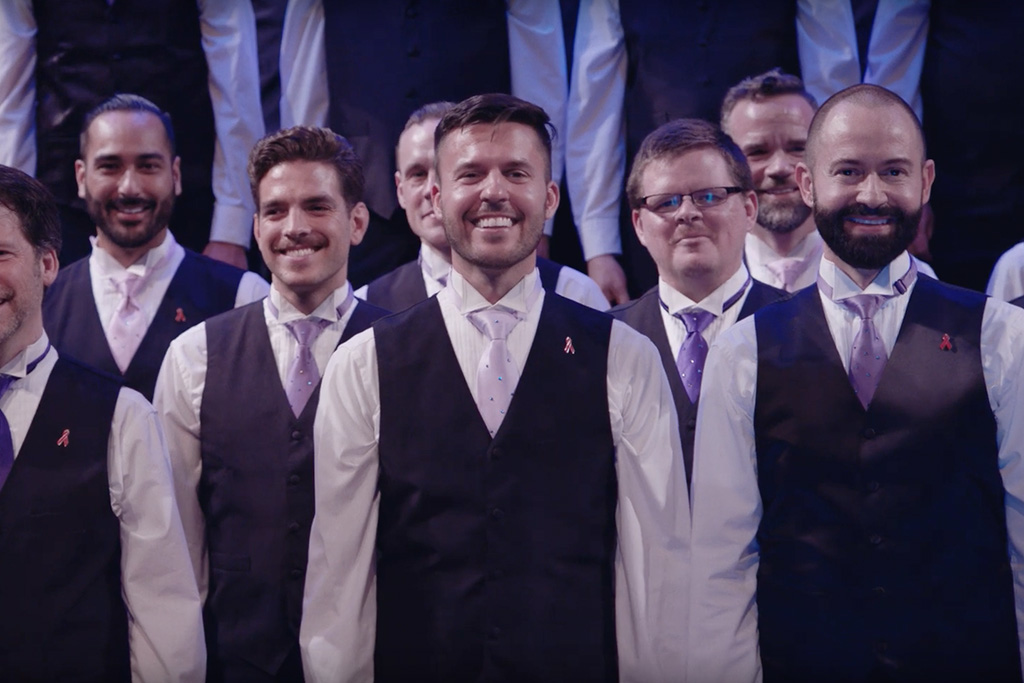 One of the more curious elements of the genuinely uplifting documentary Gay Chorus Deep South comes during the credits. You’ll have to wait a bit for it, long after every member of the over three-hundred-person strong chorus is named, to see the name ‘Airbnb Productions’ come up on the screen, but once it’s there, you can’t help but tilt your head to the side like a curious dog who has just been the victim of a fake out ball throw.

David Charles Rodrigues’ documentary follows the San Francisco Gay Men’s Chorus as they embark on a journey through the American ‘Deep South’ as an act of protest against anti-LGBTIQ+ legislation, and a way of showing support for the LGBTIQ+ communities in the five states the troupe visits – Mississippi, Tennessee, Alabama, North and South Carolina.

Airbnb Productions helped produce Gay Chorus Deep South alongside MTV Productions, and while there is no branding for Airbnb within the film itself, once you know that it was coproduced by the company, you can’t help but notice the way the film presents the divide within these southern states. I am loathe to make this review so focused on the exploration of the presence of Airbnb within such a powerful film – hand on my heart, I cried more than a couple of times here, it’s good stuff – but this discussion does lean into the corporatisation of the LGBTIQ+ community.

After all, Airbnb kicked off Airbnb Productions with the purest of intentions.

Well, the purest of intentions for them.

In the grandest realisation of brand synergy and cross-market appeal, Airbnb Productions “intends to build audience interest in areas to travel to”. The company helped provide funding for Gay Chorus Deep South, possibly due to the precedent for, curiously enough, ‘Civil Rights Tourism’. What’s more likely is that the company merely wanted to bolster their inclusion and respect policy.

The troupe do visit Selma, Alabama, and follow the same path that the famed Selma March followed. Here, the LGBTIQ+ legacy is Martin Luther King Jr.’s legacy, and Rodrigues does a solid job of reminding viewers of the link of this occurring. A momentary shot of a police officer shaking the hand of a chorus member could feel trite and noxious, but instead it plays like a hint of a divide being mended. A wrong being righted.

When paired with a four-person strong protest that has a conflicted young religious lesbian convincing herself that she has chosen a life of loving men, and only men, the picture of the titular ‘deep south’ is one that is simmering with immense dislike for the LGBTIQ+ community, rather than an outward hatred for the community. I say this not to diminish the hate crimes that the community is subjected to, nor the horrendous and archaic legislation that these districts are putting in place, but to try and explain how the documentary presents such difficulties.

The toxic and harmful legislation is explored and discussed in the film, with those who will be directly affected by them having a chance to talk about how their lives will be impacted. But, quite oddly, the harm that this legislation will bring to this community feels muted. We live in a heightened world of angst driven politics, day in, day out, and with so many themes to explore within the film, it becomes a difficult line to straddle, and it’s one that the film doesn’t entirely manage successfully.

Early on, one gay man from the Deep South voices ire at the way that the San Francisco chapter strolls in to their region like there weren’t already activists working there. I wish that this aspect of the different facets of the LGBTIQ+ community was explored, especially given how those outside the community can often see the broad spectrum of the alphabet as being routine and homogenous.

A gay man in San Francisco is different than a gay man in Mississippi who is different from a gay man in Iran, China, Malaysia, or Australia. These stories and lives are not interchangeable, even though they all come from the same umbrella. While Gay Chorus Deep South does a solid job of exploring a wealth of the aspects of the difficulties the community faces, it’s also burdened by the simply overwhelming mass of complexities, issues, stories and moments, that it can’t truly, deeply explore more than it already does.

Additionally, while I was left moved by the compassion and empathy that drips from each frame, I was left wishing that more of the history of the chorus was explored.

At the offset, and somewhat offhandedly, the history is brushed over in a nonchalant manner. For a group like the San Francisco Gay Men’s Chorus, they have been working to bring a wider understanding and acceptance of the LGBTIQ+ community to the masses, and if their Wikipedia page is anything to go by, they have a fascinating, deep history that deserves exploration. The stories that could be teased just from this group are immense, and I’m grateful for the ones we got, I just wish that there was more. For all the emotion within Gay Chorus Deep South, it is a film that is surprisingly easy to shake off. Looking back, I will be able to recall fractured moments, but I was not left changed or transformed, and given that that is the core objective of the group, and clearly the vibe that the film is aiming for, it is a mild disappointment.


This is not to diminish what is explored, especially given how impactful these moments are, carrying an immense weight that will certainly resonate for viewers who are less well-versed with LGBTIQ+ documentaries. As someone who consumes a lot of LGBTIQ+ media, with a keen interest in documentaries that explore this kind of prejudice-damning crusade, I can recognise an overlap with a lot of other similar documentaries. Gay Chorus Deep South is exceptionally made, with immersive editing that welcomes your heart, and beckons your soul to be moved. A late scene where the choir sings in a packed room, with the chorus joined by their family members and loved ones, will leave you positively bawling your eyes out.

The religious aspect of the South is explored intimately, with the chorus wishing to perform in many churches, to try break down the barriers that ill-read interpretations of their religious texts helped conjure. Prejudice appears consistently from the mouths of those who preach equality, unity, hope, and support, and it’s made absolutely clear from these proudly religious voices that equality is equality for a select few, unity within the church, and certainly not for them, and due to these exclusions, all chances for hope and support are extinguished.

An interview with an alt-right radio station appears to carry a surface level magnanimity, but that becomes difficult to reconcile and accept when the host is wearing a MAGA hat, and his co-host’s body language says clearly how outwardly against the notion of acceptance he is. I wish the film allowed us to sit with the fruitless result of this endeavour, just to realise even more that the decades long struggle for equality and acceptance is still a long way from over.

As an awfully cruel slice of criticism, and a partially misguided one at that, part of the problem with films like this is that they can sometimes feel a little too safe; a little too sanitary. Which is a terrible thing to say about a film that shows many men and women baring their souls to strangers. But, again, you see enough LGBTIQ+ films, and you get an understanding of when you’re being pandered to.

Which drags me back to the corporatisation of the LGBTIQ+ community. Call me cynical – I am – but that Airbnb label really left a sour note in my mind. I should have had a head full of powerful acapella songs and exceptional harmonies (sidenote: the one that has the men singing about the people who misuse their religion to amplify hate is a particularly acerbic song that I won’t forget any time soon), but instead, I felt like a five-too-many Woodside Pride parade floats just went past me.

It’s financially beneficial for corporations to outwardly support the LGBTIQ+ community, but when it becomes branded content or products, and without genuine change within the corporation itself, it’s hard not to recognise that they’re just piggybacking off a marginalised community, rather than actually supporting them in the way that a figurehead corporation theoretically could support them. For every rainbow themed reusable water bottle or bandana, one can’t help but ask how much of a portable advertisement the rainbow flag has become. Rebecca Nicholson wrote about this exact thing in The Guardian, and it’s well worth the read.

As Rebecca mentions, it’s easier to support an organisation that is outwardly inclusive. Sure, we get that small endorphin boost when we can be seen drinking from a rainbow coloured soda bottle – the companies outward support becomes our outward support, it’s what they call: synergy – and we’re also amplifying awareness of the LGBTIQ+ community. But, as Gay Chorus Deep South reminds, this is an ongoing struggle that has been raging for decades. Which is why the peak-capitalism of Skittles completely misinterpreting what it means to support Pride month with their white Skittles range outlines the commercialisation of the queer community.

Additionally, where do the ethics of organisations stand? Again, with Skittles, it’s clearly with their self-interest, and that’s it. So, we can’t help but ask the question of whether a church is no different than a corporation? (The logical through line of this question is: is the church no different than Airbnb?) Are political and societal lines being drawn by the optics of who supports what? There’s a legion of people who continue to avoid Hobby Lobby and Chick-fil-A because of their vocal stance against women’s rights, gay rights, and a general toxic version of Christianity. But at least the vocal homophobia from Hobby Lobby and Chick-fil-A made it obvious where they stood, and allowed consumers to act accordingly.