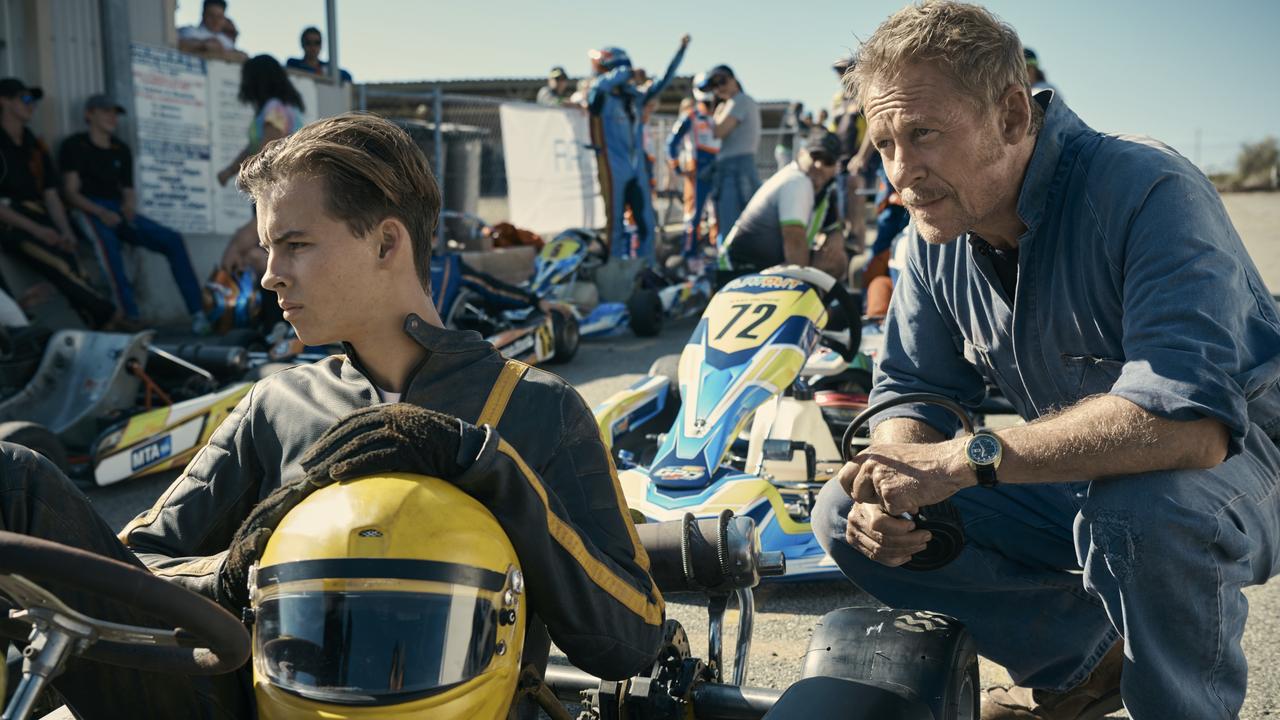 There’s something completely charming about one of the directors of the TV series Top Gear taking the experiences they learned on the series and applying it to a kids film. One would think the logical move would be to make a Fast and Furious-esque film, full of fast cars and action, but not for director Owen Trevor. With writer Steve Worland, Trevor takes the high-octane high-thrills excitement of Top Gear and applies it to the world of go karting, letting a group of kids go wild, allowing them to have similar kinds of fun that the adults of Top Gear would, all making the bulk of Go! a fun and enjoyable family flick.

Jack (William Lodder) and his mum, Christie (Frances O’Connor), have made the move to South West Western Australia (left nameless in the film, but is played by tourist town Busselton), seeking a new life and the death of Jack’s father (Adam T Perkins). Jack and his dad had a strong connection with each other thanks to cars and racing, so it’s natural that Jack gravitates towards the local go karting track and finds comfort in the speed and thrills that that kind of racing affords.

The track he drives at is owned and operated by the curmudgeonly hermit Patrick (Richard Roxburgh), and as Jack recognises his own talent, he aims to make a mentor out of Patrick. But, due to an incident in Patrick’s past, he’s reluctant to guide Jack to success. Thankfully, with persistence and gumption, Jack and his new friends, Mandy (Anastasia Bampos) and Colin (Darius Amarfio Jefferson), they’re able to build their own go kart and train and guide Jack on the path to success.

All the while, as this is a sports film through and through, Jack has a nemesis: Mandy’s brother Dean (Cooper van Grootel). In this world, go karting is a major deal, and Mandy and Dean’s family – the Zeta’s – own and operate the biggest go karting team in Australia. Dean is a less than stellar driver, but because he’s the dude in the family, he gets to drive the karts, all the while Mandy has the skills and know how, understanding the body and soul of the go kart intimately, and as she’s a girl, she’s relegated to cheering from the sidelines.

There’s a lot of gears operating in this quite entertaining film, with Steve Worland’s script adding a nice skewed perspective to a very well-worn motif. As with Worland’s previous script, Paper Planes, there’s a depth and level of humanity present that would usually be shied away from in a kids film. In Paper Planes, it was Sam Worthington’s father with depression, and here it’s the struggles that Mandy goes through to be taken seriously in a male dominated industry. Sure, like Paper Planes, Go! still operates within the genre trappings, with the hero overcoming an obstacle to triumph over all, but it’s how the journey gets there.

First up, the casting is absolutely spot on. Richard Roxburgh is an expected treat, and it’s clear that you can tell he’s absolutely relishing every single moment on screen. It’s been a joy to see his work in two great Aussie kids films, with some outstanding work in Go! and H is for Happiness. But we have grown to expect great supporting turns from the adults in kids films, which is why it’s a genuine joy to see the core cast of William Lodder, Anastasia Bampos, and Darius Amarfio Jefferson, work so well together.

There’s a welcome friendly chemistry between the three, and you can easily see Go! being the foundation of a lifelong friendship between the actors. Lodder is great as the lead, but it’s Anastasia who impresses the most, commanding the screen and showing a great level of confidence. As far as star making roles go, this is a pretty solid one, and after this, you can guarantee that she’ll be a name you’ll hear more of. The same equally applies to Darius, who takes on the Julian Dennison in Paper Planes support role here, and provides great comedic timing, making Colin a great friend to Jack.

The go karting scenes are vibrant and thrilling, with Owen Trevor sticking you right in the race, making you feel every bump on the track and every close call between other drivers. The relationship between Jack and his mum is sweet, with Jack working with the local cop (an always welcome Dan Wyllie) to get his mum out on a date.

Elsewhere, the relationship between Jack and his dad is built up with a video game meme that I’m surprised hasn’t been implemented in a film sooner. See, when Jack’s dad was alive, they used to play a racing game together, and every night, Jack races against his dad’s car ‘ghost’ in the game, never beating the car because to do so would mean he’d lose that experience with his dad. You’ve likely seen the meme online, and while I initially cringed at its inclusion here, it carries some welcome emotional heft near the end.

There’s a lot to like about Go!, with a nice story elevated by great performances, some thrilling racing scenes, all paired with the exceptional visuals of Busselton making the film come to life. A shot of the kids racing along the long Busselton jetty is particularly memorable. There’s been a curious rise of Aussie kids films focused around sports – Rip Tide, Back of the Net, and now Go! – and they’ve all been family friendly, crowd pleasing films. You’ll walk out smiling, having had a good time, and really, that’s sometimes just enough.