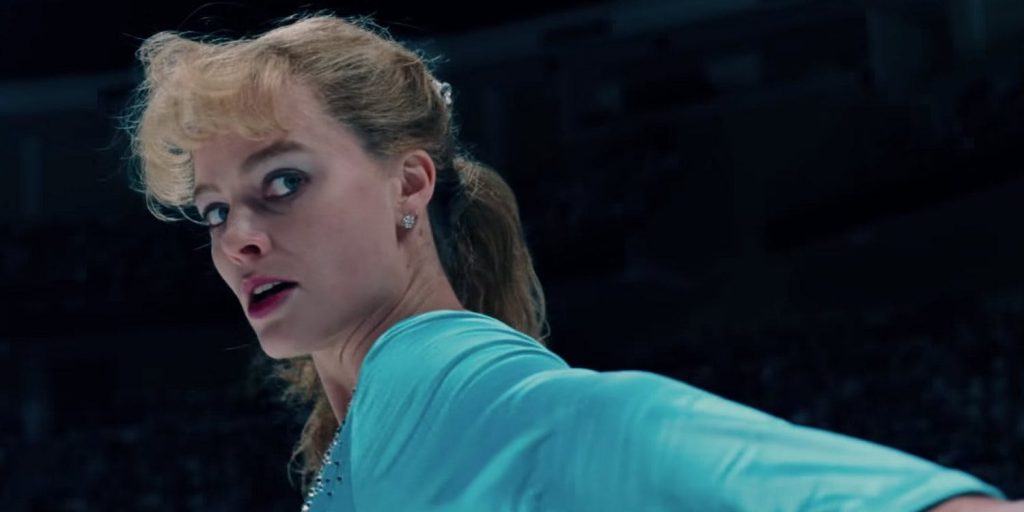 I love films based on true stories. I love sports (not all, and not necessarily sports films purely focused on the sport aspect). I love dramas. I love black comedy. And, I remember the mayhem around the Tonya Harding/Nancy Kerrigan ‘incident’ in the nineties. So, I, Tonya was always going to appeal to me.

But it was tricky to stomach in parts – for numerous reasons.

As noted pretty much everywhere, Margot Robbie’s transformation into the character of ‘disgraced’ American ice skater Tonya Harding is fabulous – and award-worthy. As is Allison Janney’s portrayal of the horrendous, well, tough-love-slash-extremely-questionable parenting style of Tonya Harding’s mother, LaVona Golden.

But, like any film about a controversial, real-life story that has, at least, ‘two sides’, it’s always hard to know how accurate or embellished the characters and scenarios are. And, as its name deliberately states, it’s clearly Tonya’s account, albeit told through both hers and other characters’ conflicting points of view, blending anecdotal accounts with actual footage and reenactment scenes – maintaining the ‘blur’ of what really happened. But even if the characters and circumstances are exaggerated caricatures, if some of the major elements are true (if nothing but the abuse she endured from both her mother and ex-husband), then sheesh, you can’t help but build some empathy for her. The film of course doesn’t portray her as the perfect human being who was hard done by (the victim of ‘the incident’ in which she wasn’t the actual victim!), but the amount of crap in her personal life, which cumulatively impacted her professional – and public – life, should earn Tonya Harding a little more respect than she initially received.

To most people, Tonya Harding is undoubtedly synonymous with ‘the incident’ – due to the media circus around it – and probably remembered as ‘the one who injured rival Nancy Kerrigan’ or ‘was implicated in some way’. Most people wouldn’t remember the details (nor do we know what actually happened) – they typically remember the ‘good girl versus bad girl’ media narrative. This film sets out to modify that.

Aside from the horrific abuse she lived through and the stress she would’ve experienced from the case while seemingly trying to a) stay alive b) stay sane and c) maintain her fitness to perform as an elite athlete (albeit a smoking asthmatic one!), what interested me most about the film was the way it amplified the notion of commercialisation of sport and marketability of athletes. The beauty-pagent-esque ice princess versus the muscular, athletic tomboy who corporate America didn’t want as their champion – or to sponsor. While this stuff still goes on, everywhere, and ice skating actually has aesthetic elements in its judging criteria, the film highlights the notion that someone equally or better skilled than a competitor could be penalised both on and off the rink – for non-technical/socio-economic/personal attributes. Brutal, in sport, and something of a metaphor for other ‘unfair’ aspects of life.

Oddly, in Australia, we LOVE the Aussie battler/underdog. Maybe if Tonya Harding was Australian, we’d’ve embraced the abrasive, resilient bogan fighter! Until ‘the incident’ at least.

It reminded me of ballet writer Elizabeth Kaye’s accounts of the rivalry, contrasting styles and public portrayal of Mikhail Baryshnikov and Rudolf Nureyevb. I’m a tennis tragic, so it also reminded me of the contrasts between poster girl Anna Kournikova versus muscular Serena Williams, Evert versus Navratilova, Federer versus Nadal. But at least with sports like tennis, and while marketability/sponsorship plays a huge role in elevating and sustaining someone’s career/lifestyle (and there is preferential treatment), the scoring system isn’t overtly manipulated.

Rather than focus on the did she/didn’t she narrative, the film made me question if figure skating should (still!) have so much emphasis on classical style and grace? Why can’t a muscular athlete bust some technically brilliant moves to Acca Dacca? What if Tonya proved to be a catalyst for change in the way figure skating is judged – metaphorically and literally? Just when I was pondering whether the perception and/or rules of ice skating have changed, I stumbled up on this recent article. So perhaps change is afoot.

But I digress. I, Tonya doesn’t go into ‘what if’ territory, but it certainly points firmly at how one, albeit horrific (and horrifically stupid) incident, exacerbated by all the other negative influences in her life, really did compound into quite the shit show for her, and ‘significantly’ impacted her life thereafter. We don’t hear much from Kerrigan’s side, and based on the other docos and archive footage I’ve seen, she seems to’ve stayed out of the spotlight as much as possible at the time and has continued to, which, again, says even more about their contrast in character. So it wasn’t exactly balanced, and risked being a stream of ‘shit things that have happened to Tonya’, it at least focused on her resilience – or perhaps, stubbornness. She’s rough around the edges, she doesn’t apologise for it, she doesn’t want to be squished into a box, she owns it and just gets on with it. So that was a positive!

Style-wise, I struggled with some of the to-camera moments, ie in the middle of the abusive scenes, it seemed even more jarring to have Tonya speak to the camera while getting her face smashed in, and some of the to-camera interviews, ie “Now this is the bit where my storyline disappears”… I assume they were meant to be humorous additions to the multi-angled narrative, but I think it would’ve worked just as well as straight ‘mockumentary’ interviews. Likewise, some of the parts my audience was laughing at (perhaps it was meant to be funny; perhaps it was just my audience) didn’t seem funny because it was such dark material. The abusive stuff is obviously not funny and the ‘stupidity’ and ‘absurdity’ of some of the characters and ‘the incident’ was not funny, and almost poked fun at mental health. These were deeply troubled humans who did ridiculous things. I didn’t find that funny.

Whether you buy it, some of it or none of it, build empathy or not, you can’t deny the impact of personal trauma on anyone’s life – played out publicly, or not.