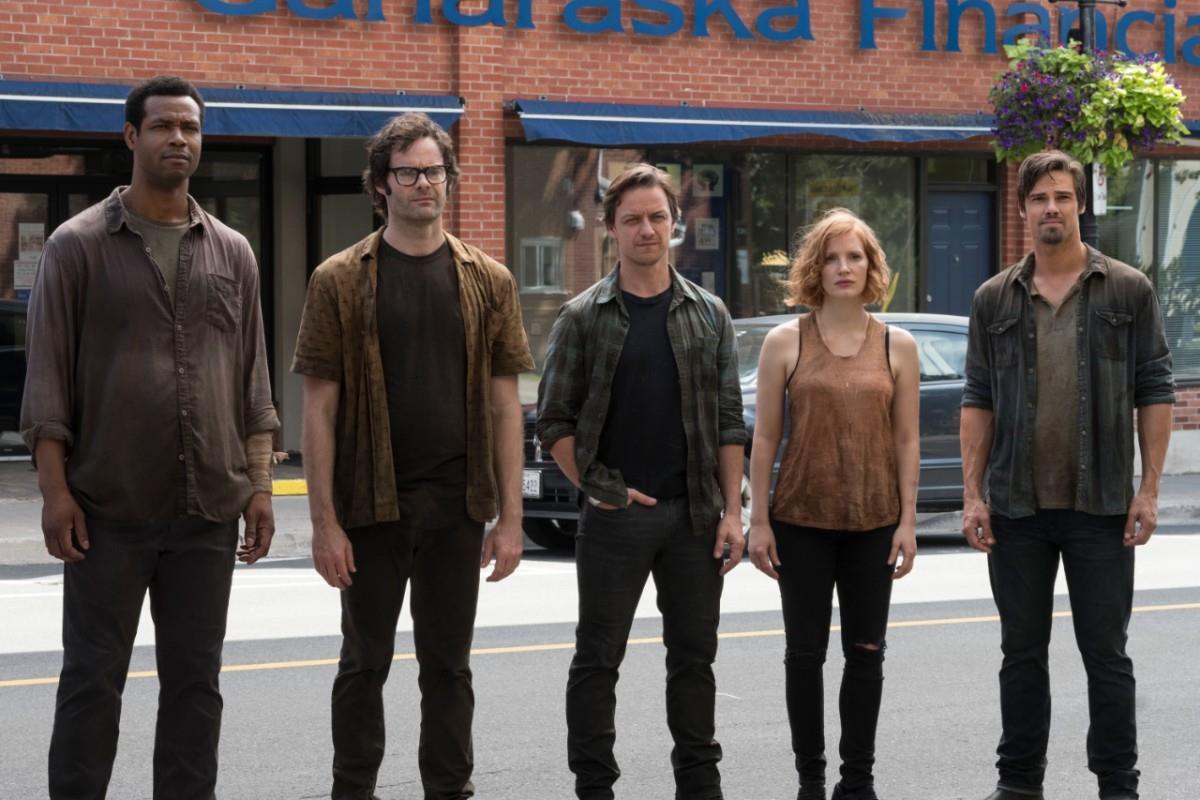 It Chapter Two kicks off twenty-seven years after the events of the first film. The majority of the Losers club have left Derry and made lives for themselves elsewhere, except for Mike (Isaiah Mustafa), who has stayed behind to keep an eye on the impending threat of Pennywise (Bill Skarsgård). Sure enough, he reappears to feed off the fear and hate within the town of Derry. After a truly unsettling, and downright real hate crime that opens the film, Mike realises that he needs to get the Losers club back together to defeat Pennywise once and for all. The only trouble is, while the other Losers have been away from Derry, their memories of the events that changed their lives have faded away.

I like to think I’m a seasoned horror film watcher. I’ve sat through some fairly brutal films and come out with just a scratch or three on the other side. I’ve trudged through Cannibal Holocaust, I’ve eeked my way through Martyrs, I’ve witnessed Thriller: A Cruel Picture. All of those films were nasty, cruel, horrific affairs. But, none of them matches the horror within It Chapter Two.

Now, before I get ahead of myself, let me clarify my point. It Chapter Two is fairly run of the mill horror stuff. The frights are routine, the gore is surprising, and the amplification of fear is a little excessive. As the continuation of the story of Pennywise, the murderous clown-alien-spider-thing from outer space, this is a pretty stock standard sequel. It rinses and repeats much of what made the first film work, and adds a bit of paprika and a bonus fortune cookie or ten to the mix. So, as a balls to the wall, keep you up late at night horror film, it misses the mark.

But saying that means that I’m only focusing on the obvious horror on display. Yes, there’s a wealth of hand-itching, spine-tingling fright sequences, and director Andy Muschietti certainly knows how to make the tension as taut as a piano wire, but it’s what lies underneath these horror moments that makes It Chapter Two a wonderfully impactful affair.

It Chapter Two somehow makes a solid case for ignoring the first film completely and just watching this one by itself. The reasoning for this is that the format of the book – swapping between the young Losers club and the adult Losers club – is applied here, making the transition from youth to adult more understandable and coherent. The trauma that the kids suffer is greater realised in their adult versions when you see the two side by side.

Performances are stellar across the board, with James McAvoy as Bill, Jessica Chastain as Bev, Bill Hader as Richie, Jay Ryan as Ben, and James Ransone as Eddie, all delivering exceptional adult depictions of the kids we came to know in the original. There’s a clear, logical throughline that matches the kids performances with the adults, and it’s this element that helps make the film soar. Unfortunately, as with the first film, Isaiah Mustafa’s Mike is given the short stick, with huge sections of the film appearing to forget that he exists at all. Mustafa does his best with the limited material he’s given, but you can’t help but wish that he were fleshed out more.

As with the first film, the decision to split everyone up mildly hampers the narrative drive. Sure, the decision is met with one of the many great comedic moments from Hader’s Richie – ‘well that’s a fuckin’ stupid idea’ – but you can’t help but feel that the same mistakes of the first film are about to be repeated. Fortunately, Muschietti and writer Gary Dauberman, manage to employ the acting talents of their cast and deliver them the material they require to dig into their characters past traumas.

And it’s here, the exploration of past trauma, the look into the causation of each characters anxieties, that makes It Chapter Two a purely brilliant film that left a mark on me more than any other horror film has in recent memory. The reflections of a past long gone, the echoes of pain that ring through our lives, the forgotten memories coming back to life, all of these elements strike with alarming brutality in this film. As the Losers club once again find unity in desperation and fear, I couldn’t help but reflect on my own past, on my own traumas. Sure, twenty-seven years ago I was only seven years old, but I was already finding out that the world was not an easy place.

The character of Pennywise is one that monopolises on ones fear, that feeds off the terror that thrives in us all in our darkest moments. While the use of Pennywise is decidedly sparse in this film compared to the first, he exists in the terror that resides in the shadows of our minds. He finds comfort in pain, and manages to utilise that pain for his own advantage. Sure, he’s a purely fictional character, heightened in every way, but there is something so devilishly real about his motivations. It’s rare for a horror film to move me, but It Chapter Two did exactly that with each character being dragged down by the eager hatred of someone else. Whether it’s the homophobic thugs that enact the brutal hate crime against Xavier Dolan’s Adrian Mellon, or the eternally spiteful Henry Bowers (Teach Grant) who lives on the pain and hate he enacts on those ‘weaker’ than him, the realisation of real world hate is what makes this film so purely unsettling and disturbing.

It Chapter Two reminds me why film can be such a personal format. Sure, we are amazed that we have fifty superhero films featuring obscure characters from back issues of nowhere, but who expected a deep and powerful film about grief and trauma with a massive budget and full blown gore and weirdness? It’s hard for anyone to imagine themselves as a superhero, because they’re so generic and far from the norm that they become, well, fantasy. But these kids, these kids turned into adults, full of the fears that they’ve grown up with, full of the pain they know is all too real even though they’ve forgotten exactly why they feel that pain, these characters are the real superheroes. It seems trite to say this, but it’s true. These are the inspirational characters, and it’s them that makes the hopeful note that the film ends on carry greater weight than initially expected.

I didn’t expect to be moved, terrified, or shaken by It Chapter Two. I didn’t love the first film, and went into this one with a small dose of scepticism, but, driving home from the cinema I found myself disturbed. Memories of my childhood traumas came flooding back, memories of bullies long past, of the cruelty of men, of the eagerness to inflict pain and hate on someone else – all of this came back with alarming reality. But, compared to other times in my life where I’ve had unwelcome reflections of the hate that I’ve been subjected to, I felt oddly prepared this time. I’m not saying that It Chapter Two is a restorative film, far from it, but the hope and unity that it presents is one that I found great comfort in. On top of this, the frankness of how difficult it can be for some people to overcome traumas is appreciated. For some, the trauma and the pain is too much, too insurmountable that it conquers them, and it’s an impressive thing to see realised to respectfully and purely in a major Hollywood film like this.

Sure, everyone will be flooding along to go and see a film about a scary clown, and that’s great, but for me, it was the exploration into the depths of humanity – both the good sides, and the bad – that made this film a surprising and stunning time. I’m grateful that given the resurgence of horror, that the novel of It was able to be presented with all its eccentricities and weirdness, with all its absurd quirks and freakish delights*, with all the tendrils of the Stephen King universe intact. This may not be a film for everyone, and the current critical consensus is wildly varied, but for me, this was an easy home run. I cannot wait to dive into it again.

*As a sidenote: there’s one horror scene that has a sliver of a song played that comes out of nowhere, and gosh, I nearly clapped when that happened.

Writer: Gary Dauberman, (based on the novel It by Stephen King) 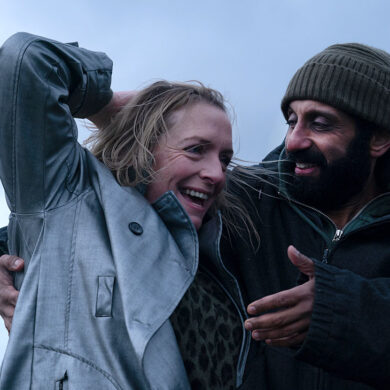