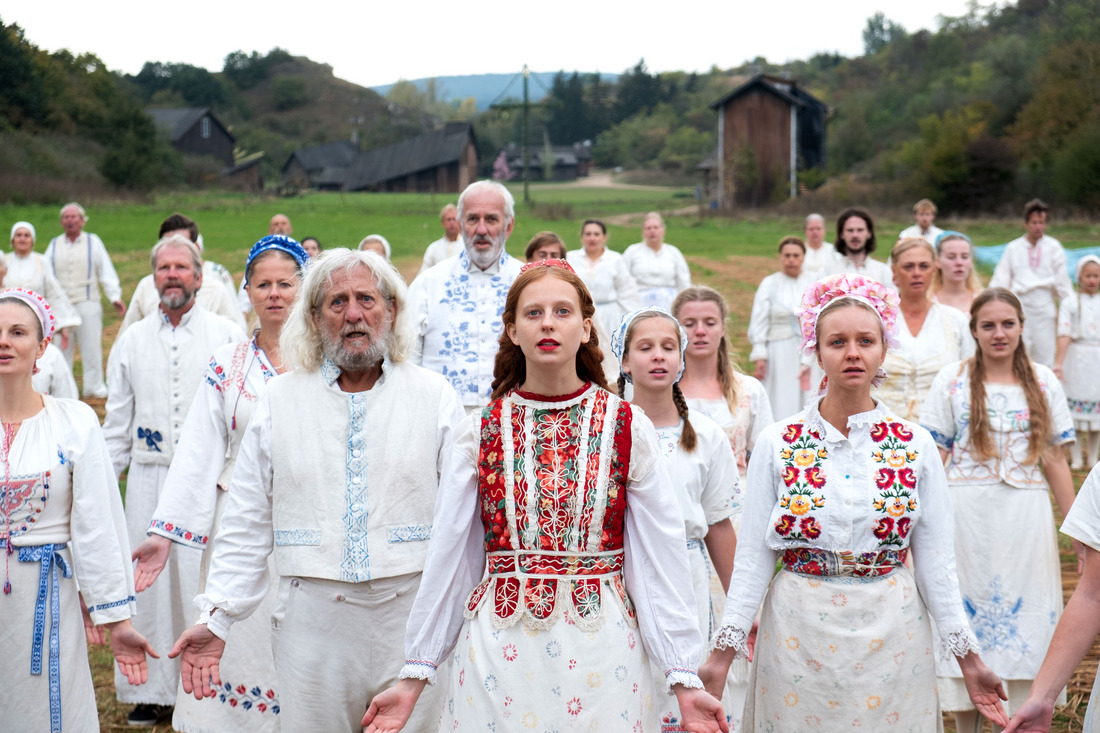 
Director Ari Aster exploded on the horror scene with his unsettling, performance driven flick Hereditary. Encompassing a disjointed, fractured narrative was a powerhouse performance from Toni Collette, who managed to harness her best capital A Acting skills, and devoured every single piece of scenery doing so. Look, Hereditary is a film that is a mish-mash of genre tropes – madness, splashes of horrific gore, spirits, possession, strange kids – and, in the moment, it works a treat. With a wealth of good ingredients that are thrown together by someone who once ate a great meal and figured they could do the same thing at home, Hereditary can’t help but feel half-baked. There’s a strong hint of what the original meal looked and tasted like, but it feels decidedly not right.

I say this as a way of breaching the fact that Midsommar, Aster’s second feature, is an equally fractured, unfocused film that thrives in the moment, yet crumbles apart when reflected upon. As with Hereditary, Midsommar focuses on a mentally unstable woman who has lost her parents. Florence Pugh takes main stage as Dani, someone who we meet already at the end of her tether. Ever concerned about her bipolar sister, who has once again gone missing and is unresponsive to messages or phone calls, Dani relies on her fatigued and frustrated boyfriend, Christian (Jack Reynor). He’s a mildly sympathetic partner, beleaguered by a group of friends (William Jackson Harper, Will Poulter, Vilhelm Blomgren) who badger him to dump Dani. ‘All she does is call you’, they say to him as they’re out for drinks, with Poulter’s cock-driven Mark suggesting that Christian could be going out with a barmaid for the night instead of having to field phone calls from Dani. These intellectual dude-bros are anthropology students who envisage grander, smarter lives for themselves, and at the invitation of Vilhelm Blomgren’s Pelle, they head off to Sweden, to help Harper’s Josh write his thesis on European midsummer customs. In a bid to stave off a deeper depressive state, Dani joins the ‘boys’ on the trip – after all, a bit extended sun and fresh air should surely help her out with her understandably mournful demeanour.

And it’s here that I can’t help but stray into spoiler territory. If you enjoyed Hereditary, then sure, head along and see Midsommar. It’s a fascinating film that left me excited and entertained. The ‘horror in the daytime’ element of the film is why this film works, and it’s a testament to Aster’s skills that he manages to tease out, and then masterfully manipulate, an elongated tension that surprisingly works well over its two and a bit hour runtime.

So, spoilers for both Hereditary and Midsommar…

Midsommar presents a curious continuation of Ari Aster’s interest in following those who unwillingly embark on a path to heightened power. With Hereditary, he dragged a tortured family along a path to where a fractured son becomes a possessed King. In a film that’s replete with exaggerated horror tropes, it’s this final reveal that this was all a ploy by some cult to find a suitable host for some spirit to rest in and become their King. Yet, the cult, and in turn, the ‘King’, are not the villains of the piece, instead, it’s the broken family unit that are the enemies.

The way Ari Aster utilises mental health problems in his films is quite fascinating. There’s a vague sense that he’s being respectful to those who live with mental health problems, but then, he utilises heightened emotional outbursts that many who live with depression, anxiety, bipolar disorder, or any other mental health problem, as a way of creating dramatic tension. He manipulates the audience by putting them on edge by presenting clearly unstable people in unstable situations. You can see the logical path that the characters should take – Dani should receive proper medical care and treatment, helping her through her grief and trauma – but Aster is more interested in presenting the ‘worst case scenario’ for these characters, and then rolling the dice to see what kind of trauma they’ll further be subjected to. Is this entertainment? More importantly, is this ethical entertainment?

Florence Pugh, just like Toni Collette, gives a full bodied, emotionally draining performance. She delivers a searing portrayal of someone living through grief and depression and finding themselves thrust into a situation where nothing but further grief and depression is heaped on her, leaving Dani in a situation where – after quite literally losing everything – she is free to lose the last thing that she holds dear – her mind. Yet, unlike Collette, Pugh never overacts, instead, giving a powerfully nuanced performance that appears to exist in a completely different film than the one she finds herself in. A gradually fracturing mind is hard to portray on screen, and yet, Pugh manages to embody this trauma brilliantly.

As Midsommar meanders on, Aster eagerness to present a commune as a cult can’t help but feel like an overwrought facsimile of The Wicker Man. The comparisons are blatant – both are films about a major sacrifice being made to ensure that a ‘crop’ is bountiful for the next harvest – and yet, for all of Aster’s desire to make Midsommar unique, he can’t help but muddy his own waters, making his intentions, and narrative, unclear. There is a grand attempt at creating a lore here that is deep and historic, but Aster stumbles more that soars, with some nitpicking points that required clarity – if this celebration only occurs every ninety years, then who carries on the tradition if people are required to ‘die’ at the age of seventy two? And, in turn, if this sacrifice only happens every ninety years, then what happens to the eighty nine other harvests that occur in between those years? Maybe a future viewing, or the much promoted ‘directors cut’ (which sounds awfully like A24 merely trying to out-gross Hereditary but pulling an Avengers: Endgame move and putting out an extended cut for the Midsommar faithfuls to help drive that box office up a little more), will help illuminate these plot foibles.

I feel I should explain what the cult is about, but there’s so much deliberate vagueness employed that it’s hard to actually say other than this is a remote Swedish cult who believe that death is an honour, and that God-like genius comes from inbreeding. They also believe in ethical harvesting, and good food production, as well as encouraging the production of very impressive clothing. Oh, they’re also pretty good at creating art as well. Aster’s production design (thanks to Henrik Svensson) is – just like Hereditary – absolutely sublime. Aster employs a meticulous eye for beautiful architecture, alongside pristine nature shots, proving that if he somehow fails as a director, he could quite easily establish a commune for Instagram influencers to visit and take glamorous selfies at, and he’d be just as successful.

But, wrapped up in this fable about grief and life and death is a fumbled exploration of the honour in dying. It’s impossible to assess Midsommar and not come away with a damningly view of the line that Aster has drawn from a daughter murdering her parents in their sleep, and then taking her own life, through past the line of the two seventy two year old commune-ites (I struggle to call them cultists, although it may appear this is what Aster wishes them to be known as) who jump off a cliff to their horrific, gore driven deaths, all the way to the end point of two men sacrificing themselves alongside five unwilling ‘tributes’. It’s unclear – at least on first watch – what Aster is saying about death. Is it better to have lived a life knowing when your end point is, embracing all the joy that life brings, and then marking a point where you will cease to exist? What is he saying about mental illness here other than, sure sucks to be you, have you ever thought about embracing madness? Maybe then you’ll be truly free? I am willing to be proven wrong about this, but after rolling this film around on my tongue for a week, I can’t help but feel that Aster is willing to manipulate the dramatic elements of living with a mental illness so he can employ them in his fictional narrative horror-rides.

I want to stress, as my review is failing to display this, I thoroughly enjoyed Midsommar while I was watching it. I found the performances across the board brilliant, with Florence Pugh and Jack Reynor in particular being standouts, and a note that Will Poulter has never been creepier. Ari Aster is an assured director who clearly is comfortable behind the camera, and it’s his technical ability and visual style that helps the viewer ignore many of the issues his films have. When paired alongside his editor, Lucian Johnston, and cinematographer, Pawel Pogorzelski, Ari Aster becomes a major force to be reckoned with, crafting some of the finest horror creations this side of The Babadook and The Witch. As modern horror seeks to cement its new figureheads, Ari Aster certainly has earned his place at the table where he, alongside Mike Flanagan, Robert Eggers, and Jennifer Kent, have all earned their opportunity to live deliciously.

In My Blood it Runs Review – An Important and Educational Documentary

But, while I found the experience of Midsommar suitably torturous and unsettling, I still have the right to ask whether sitting down and watching another woman suffer with an untreated mental illness, as she is surrounded by unsympathetic people, and as further trauma is heaped on her for two and a half hours, (excuse the fractured sentence), is that ethical? Is it right to mine mental illness for the use of amplifying horror in films? Sure, Aster is respectful, and yes, he clearly makes those who do nothing to help Dani into villains, with their comeuppance being well deserved, but again, does that make it right? If anything, with a brutal partial decapitation in Hereditary and two head crushing sequences in Midsommar, Aster genuinely has something against the human head (or, rather, mind).

I can only shrug, and suggest that you head along to see Midsommar and make up your own mind.