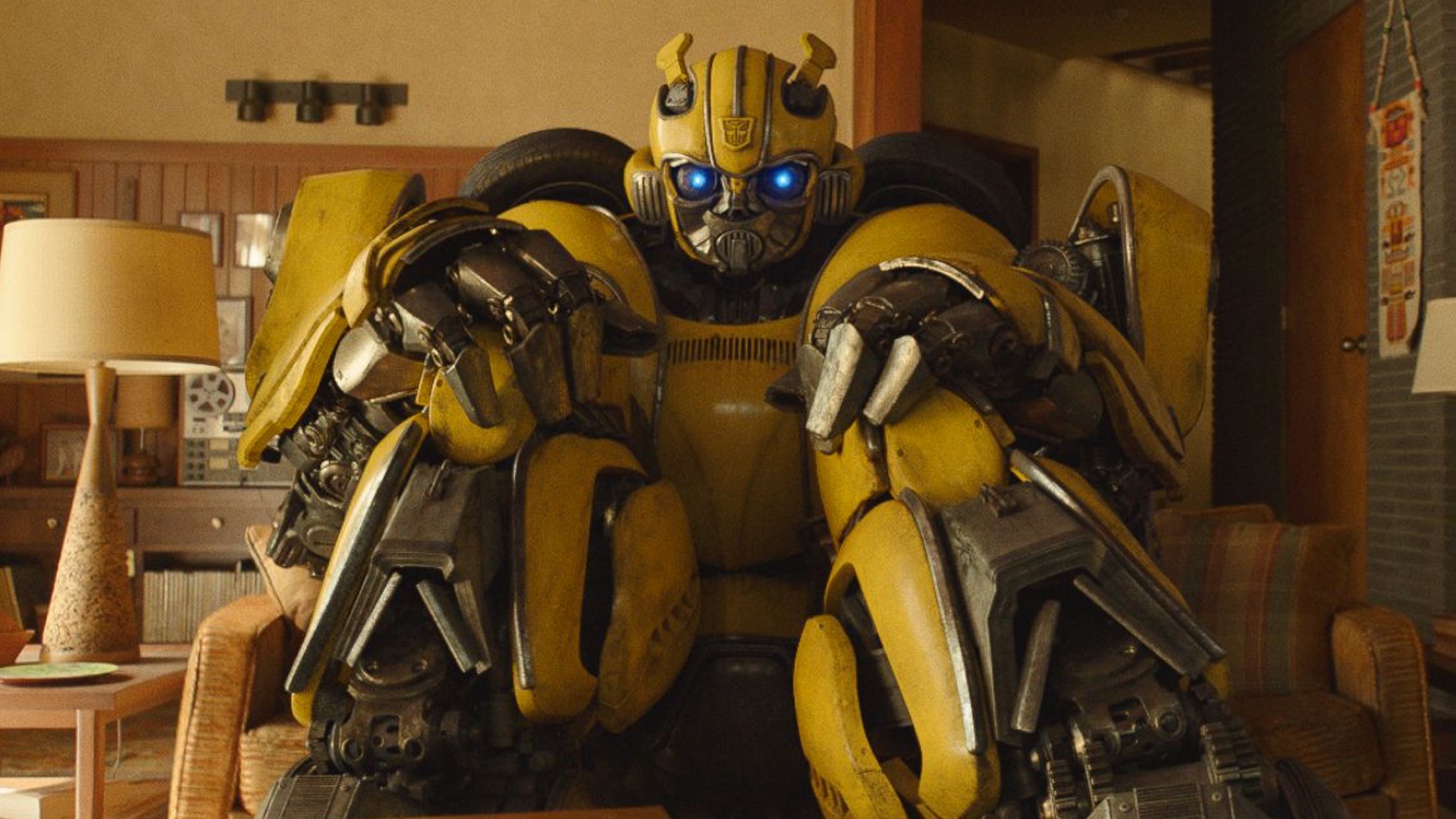 As a course correct after five very successful Michael Bay directed Transformers films (making a gross figure of $1,449,356,365 at the box office), Travis Knight’s Bumblebee is a strange affair. It’s both a continuation of the Bay series, but also a mea culpa to the cartoon fans, with this entry taking place in the eighties, making it some kind of strange reboot.

Bumblebee opens with the fall of Cybertron. Decepticons decapitate Autobots, and digital carnage fills the screen. It’s visually impressive stuff, and surprisingly coherent. As the Autobots escape, leader Optimus Prime sets his pal B-127 on a path to Earth. Of he shoots to Earth, crash landing in the middle of a paint ball training session run by military dude Agent Burns (John Cena). Before you know it, the military is not impressed with this alien entity, turning Bumblebee into persona non grata. He flees, somehow managing to take refuge in a car salvage yard.

Cut to Charlie (Hailee Steinfeld). A girl just about to celebrate her eighteenth birthday, Charlie desperately wants a car of her own so she can be free. Her mum (Pamela Adlon) and step-dad Ron (Stephen Schneider) can’t exactly afford a car for her yet, but they can certainly give her a helmet and a book on how to smile more for her birthday. Charlie is a wannabe mechanic, and in her downtime spends her time tinkering on a car that she was working on with her dad before he died. She has a good relationship with the owner of a the aforementioned car salvage yard, and when she stumbles on a rundown yellow Volkswagen Beetle, he relents and gives her the car for her birthday if she can get it started. Sure enough, thanks to her trusty spanner, she does, and off she goes.

All this set up is merely set dressing for what is a massive eighties nostalgia kick. In between the solid score by Dario Marianelli (taking over from series regular Steve Jablonsky), is almost every single eighties music reference – with everything from Take On Me to Never Gonna Give You Up to The Smiths getting a quick spin. It’s a bit overwhelming. This frenetic jukebox of tunes plays atop a wannabe mish-mash of E.T. and The Iron Giant.

Which, on paper, sounds like a great idea. Heck, if Bumblebee wasn’t strapped to the Transformers series, it would be a brilliant film. But, as it is, it’s beholden to a series that was built on frenetic, insane, racist, misogynistic nonsense. To try and filter that mess down into a wholesome, family affair, simply doesn’t work. Yes, this entry is currently sitting at an impressive 94% on Rotten Tomatoes (critic faux pas number one – mentioning Rotten Tomatoes in your own review, good job!), but one has to wonder whether the positive reviews are merely a reaction to five less than stellar films.

Now, I can’t really talk as I’m one of three people in the world who actually enjoyed Michael Bay’s films. All that I enjoyed about the Bay films were the reasons people hated them. The blatant careless product placement, the insanely toxic universe Bay crafted, the disregard for decency – it’s not good; it’s audacious. You don’t have to applaud Bay’s filmmaking, and you don’t have to respect Bay as a filmmaker, but for me, he’s a guy who knows what he’s doing and knows how to do it. Michael Bay knew that he was working in service of the system. Transformers, by design, are toys brought to life just to sell more toys. Bay’s films were mere vessels that exist to sell more toys. And, in turn, they worked to sell more energy drinks, more portable stereos, more Chinese water. Does it make it right? No. Does it make it good? No. But, what it does it it makes it a pure product of capitalism.

What Travis Knight’s Bumblebee is then is the result of someone trying to install a heart into a cold, broken machine that has no place for a heart. The skeleton of the loner teen and an alien robot is so very much eighties-lite stuff that it does work by itself, but when you pair that with a film that still contains robot decapitations and a moment where a robot is sliced clean in half, as well as multiple humans being turned into goop, it ends up becoming a disjointed mess. That Bay-level violence doesn’t sit well in a film that’s attempting to be sweet and heartfelt.

It’s worthwhile noting that Christina Hodson’s script has some genuinely nice moments in it – the family dynamic that Charlie lives in is nice, and the interactions that Charlie and Bumblebee have with each other is solid. It’s obvious that this script has come from one mind, rather than a writers room of parroting dudes, and that alone is well worth appreciating and applauding. If this series has legs and continues down this nostalgia driven path, then one can only hope that they stick with this format.

It’s just a shame that most of the characters outside of Charlie and Bumblebee are so one-note. John Cena’s Agent Burns is ‘a man on a mission’. Jorge Lendeborg Jr.’s Memo is only interested in one thing – dating Charlie – and that’s it, making him a tedious dude just trying to get a kiss. Charlie’s brother Otis (Jason Drucker) is the obnoxious kid-bro who is obnoxious just because. Everybody is a cookie cutter character, which turns what should be a colourful box of crayons into a carton of beige.

Throughout the film, Bumblebee watches The Breakfast Club, which feels like it’s going to have some kind of narrative kick at the end, but instead it’s just so when Bumblebee raises his fist in response to a salute, you get a bit of a nostalgia kick and think, yeah, I remember that film. When paired with the eighties music, the eighties aesthetic, and the eighties ‘look’ of the Transformers characters, it all becomes an exercise in nostalgia. Which can be ok if there’s something more to it other than ‘I remember that’, but alas, that’s not the case here.

What frustrates the most about Bumblebee isn’t the fact that the film decides to erase the yellow-heroes legacy of being a soldier during WWII who took down Nazi’s and helped a robot watch take down Hitler, but the fact that it’s so bland and tepid. It’s a real shame to call Bumblebee serviceable, because it should have been so much more than that. But it is. Where Bay’s films were powered by a capitalist agenda – arguably, the core entity that fuelled the Transformers series to begin with – Bumblebee is driven by nothing more than desperation. A desire to keep the intellectual property alive (and in turn, keep Paramount alive, as the Transformers series is one of their most reliable cash-cows) shouldn’t be reason alone for this film to exist, but it is.