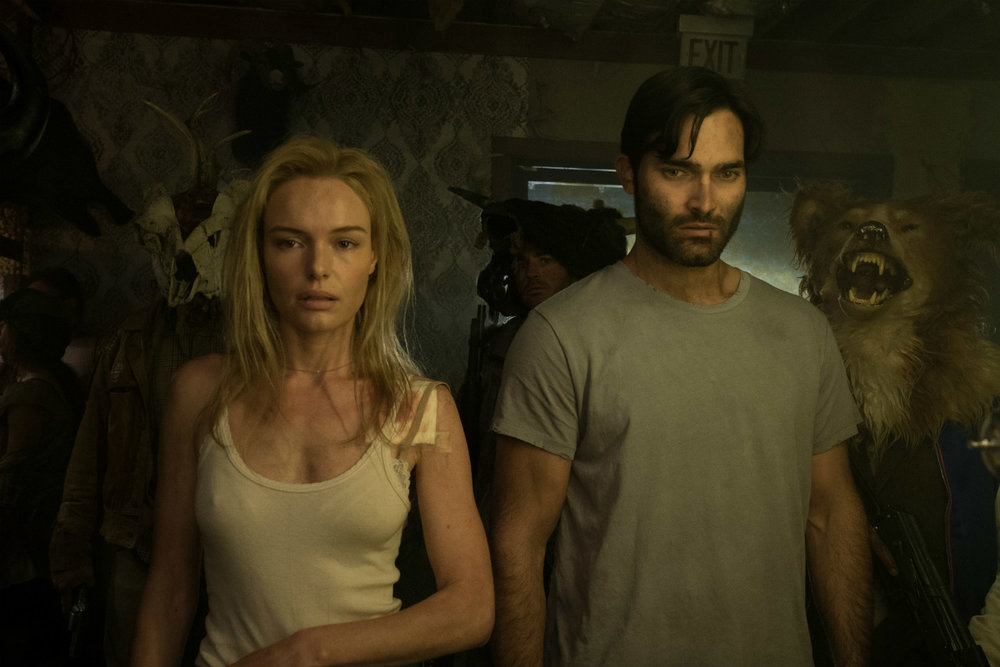 A dystopian future, gang violence and road trips. It’s a formula so familiar that I don’t even need to list any familiar examples because those three plot themes just had fifty plus film titles running through your head. The Domestics however, tried to be original. Oh, wait – no it didn’t.

Kate Bosworth (Straw Dogs) and Tyler Hoechlin (Road to Perdition, TV’s Teen Wolf) headline this dull glimpse into an extremely unlikely (but with Trump in office anything is possible) American future. Most of the American population has been culled and the survivors have all split into separate gangs, all with their own territories that Nina (Bosworth) and Mark (Hoechlin) must go through on the way to Nina’s parents place to somehow save their marriage. Nina and Mark were mid-way through a divorce when it all hit the fan and since the apocalypse started, have decided to stick it out.

This was a huge mistake from screenwriter Mike P. Nelson (also director) because for most of the duration, Nina hardly talks to Mark and is pretty rude when he tries to talk to her – and Mark is a nice guy, not perfect, but clearly loves her. Nina’s attitude is so annoying – I’m trying to care for these lead characters, to invest in them so that I care about the film itself – there’s no point watching it if I don’t care about the characters. Nina has almost no character development bar one scene when Mark is off exploring an abandoned property and she starts listening to some screamo music and moshes in the comfort the empty, abandoned home they found in the middle of nowhere.

I could not care less for Nina, I felt sorry for Mark for putting up with her for the duration of the film. Kate Bosworth really did not seem to suit the role either, not to say that she isn’t suitable in terms of her capability, but I felt the character was so monotone and bland that she was just bored. Maybe a lesser known actress who would have just been excited to be in a film at all would have been better.

Tyler Hoechlin however is quite likeable. Mark is a sincere and generous person. we get to know him because he does most of the talking, driving, moving, thinking and pretty much everything else. He has actual character development, he tries to make friends and still has trust in the human race. I like Mark and Hoechlin played him well. Lance Reddick (TV’s Bosch) makes an appearance and is fantastic as a kind soul who invites the couple to his place for dinner in the middle of a shootout.

The pacing of the film is also a disappointment, for the most part it is quite slow until the final 20 minutes. This was another reason that Nina’s character was unlikeable, there was not enough excitement on screen to be able to deal with an unlikeable character for so long. Every morning in the film there’s a radio broadcast by “Crazy Al” (Allyn M. Schmitz). These were a complete waste of time and would have been better spent giving the lead characters more development.

Another issue in the film is that throughout the duration of almost the entire film, Nina is almost completely docile then in the final shootout she becomes GI Jane with a lever action rifle. There is no consistency. In those final moments of the film however, I saw a glimpse of what Nina could have been. A bad ass survivor who doesn’t take any crap. It is a shame that this version of Nina only went on for 10 minutes, if she was in the whole film, it would have been quite enjoyable.