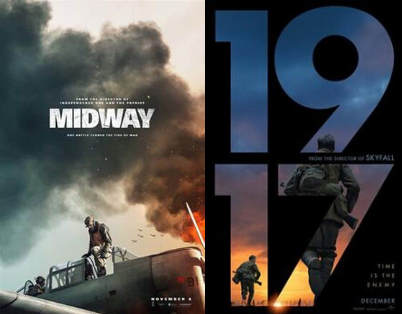 I finally managed to see 1917, in a double war film effort, that also encompassed the latest release of the two, Midway.

I don’t really need to go into 1917, as it’s been the talk of the town for the last few months, winning all kinds of kudos. I will say I certainly enjoyed it, it was well-acted, and the sets looked fantastic. I don’t really think the ‘one take’ style really added anything to it, and, in fact, I think it would have been better without it – I’ll also leave you with one more revelation:

While I enjoyed 1917, it was really the emotional impact that Lance Corporal Schofield (George McKay) meeting Lieutenant Joseph Blake (Richard Madden) at the conclusion that really made it stick with me. When Lance Corporal Blake was killed, earlier on than I thought it would happen (not that I expected it at all until that scene began), I thought that 1917 had really shot itself in the foot. But I cared enough for his character that seeing his friend, Schofield, complete a mission that Blake ultimately cared more about, was of great relief for me as the viewer.


While I still think highly of the film, I thought I was going to enjoy Midway even more but this was not the case.

The theme of war is the only thing these two films have in common. This is not to say that Midway is terrible, it’s not, 1917 is just superior – which I should probably have expected.

Midway focusses on the war efforts of the American and Japanese Navy, it briefly covers the Pearl Harbour attack before focussing on the battle of Midway.

The film contains an ensemble cast, and to be honest, it’s almost hard to find a lead character here, it’s so well balanced, even giving Japanese characters ample screen time, the film seems to be respectful in this way. Midway is even dedicated to the American and Japanese soldiers that fought in that battle.


The stars are of the film are Ed Skrein, Patrick Wilson, Woody Harrelson, Luke Evans, Mandy Moore, Dennis Quaid, Aaron Eckhart, Nick Jonas, and the list goes on. Alexander Ludwig even makes a brief appearance, although his character looked like he could’ve been one to base a film around, sadly, his heroics are short-lived. None of the crew performs as convincingly as the cast in 1917, but they still make Midway good film. Ed Skrein is particularly delicious as a rebel-come-hero pilot. The last time I saw him was in Alita: Battle Angel, and he was just as good there too. If I had to pick anyone for the lead role in Midway, it would have been Skrein, and while his performance was not as strong as George McKay’s was in 1917, I found watching Skrein more enjoyable, he was just having more fun. The other standout, in terms of performances, was Nick Jonas, his tough-guy act was convincing, even if it was only brief.

Midway looked really good though, the destruction was large-scale, and the dogfights were great fun. They were reasonably frequent too; it was extremely well-paced. Not that these two films should really be compared, they’re completely different, but I’m going to anyway, I sat through them both, one after the other, so I help myself – and 1917 clearly wins the battle of the war films, but Midway puts up a hell of a fight and is a bloody fun ride.

The main difference for me was that 1917 is what cinema should be, and Midway was popcorn entertainment.

Another way to look at it is that one is Sam Mendes, and one is Roland Emmerich.