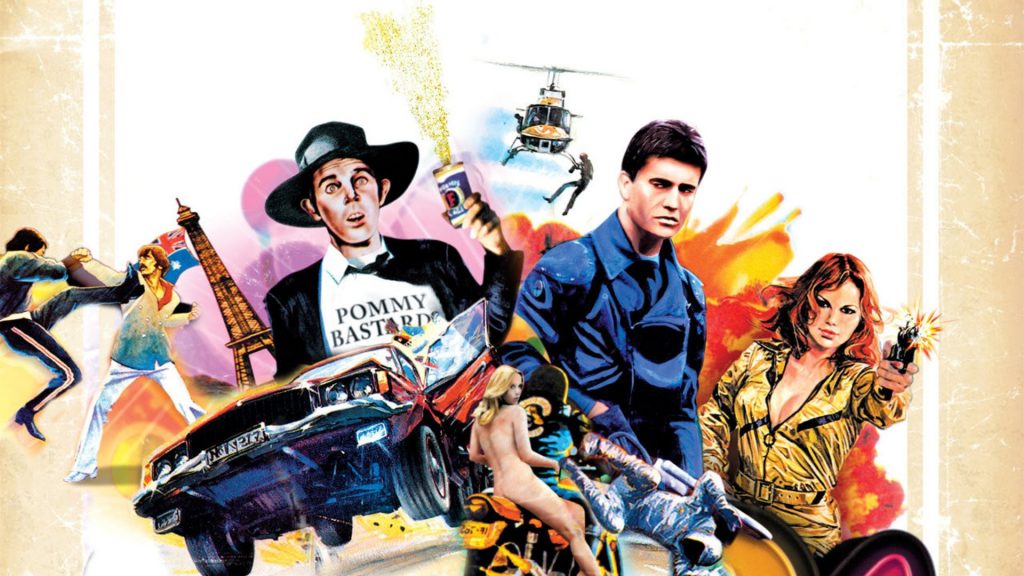 Not Quite Hollywood Blu-Ray Review

For a film that looks back at a formative time, it’s impressively not one driven by nostalgia, and doubly so, it’s not one that’s presented with rose tinted glasses on. This is a warts and all documentary, with the directors, actors, stunt men, and fans, all dishing up the stories from that era. Yes, of course, motormouth Quentin Tarantino is there with a level of excitement for Australian cinema that you wish you could bottle up and spike the drinking water with. Accompanying Tarantino is the likes of Brian Trenchard Smith, Steve Bisley, Briony Behets, Graeme Blundell, Bob Ellis, Jamie Lee Curtis, Ted Kotcheff, John Jarratt, George Miller, Russell Mulcahy, Judy Morris, Grant Page, Sigrid Thornton, Wendy Hughes and more. (Is that enough SEO for you Google?)

The stories that these folks spin are larger than life, and come with all the incredulity that comes with an era where blowing the roof off a building in Sydney was possible brings. Hartley’s affection for the Aussie cinema comes through loud and clear as well. After all, his role as a creator of supplementary material for Aussie releases helped pave the way for such a film.

Yet, a talking heads doco only goes so far, and it’s here where the production values for Not Quite Hollywood help boost it above being just a name-checking endeavour. The bright, loud, expressive titles and intertitles help push the excitement that the films themselves deliver. While the film could also easily slide into being a glorified clip show, it manages to avoid that dilemma by having a unique personality on its own. Sure, the excessive amount of boobs and explosions also help keep the film entertaining – after all, it seemed like almost every second film that came out in that era had something to the effect of that in it. This was the era of Deep Throat in Times Square, and Not Quite Hollywood goes to great lengths to showcase how the popularity of that film travelled down under and effected the films here.

If there’s one thing that Not Quite Hollywood did when it came out in 2008, was help inspire a new era of filmmakers and historians. Folks who had their notepads out while watching the film were kept busy with a seemingly endless list of titles that they just had to check out. For too long, it seemed like those films were lost to time, or if they weren’t lost to time, they’d be slowly aging on VHS in somebodies garden shed. Umbrella Entertainment stepped up and took on the challenge of restoring and resurrecting these cinematic skeletons.

It’s no secret that their efforts have delivered some of the best, must have releases that this country has seen. Like a broken record, I’ll remind people that if they don’t have The Man From Hong Kong in their collection, then they’re missing out. The dedication and attention that was brought to that release (and countless others) was brought to this Not Quite Hollywood release in spades. No, not spades – this is like the crew at Umbrella said, ‘guys, we’ve got to work overtime this weekend’ and hired an excavation crew to dig up an age of special features. There’s a long weekends worth of stuff here that will keep the eager cinephile busy. 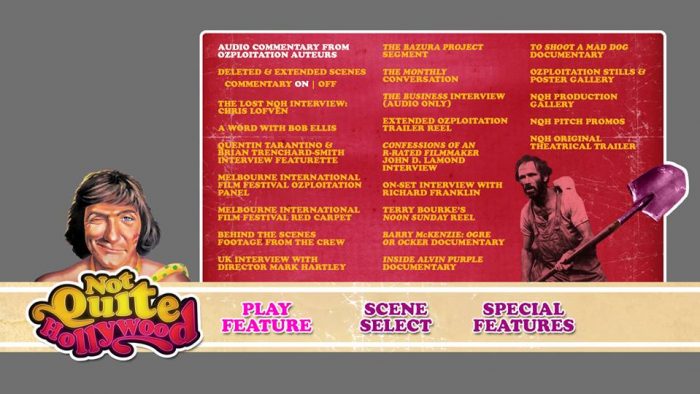 There’s simply too many special features to run through right here, but check out the image above for what exactly is delivered on this release. Arguably, the film itself would be enough, but the plethora of entertainment and information here is sublime. Personal favourites include the extremely informative Audio Commentary from Ozploitation Auteurs. If you thought the film alone was illuminating, then this commentary will open your eyes further. The MIFF Ozploitation Panel is exciting and interesting, and as a Perth-based film lover, makes me wish that we had this kind of event here (or at least, makes me wish for a MIFF Panel DVD by itself, covering all the different panels that MIFF have had over the years). And a final special feature that made me shed a tear was hearing the effusive Bob Ellis ruminate on Australian cinema.

If there’s one note of complaint that I have for these great Umbrella releases, is that even with every essential special feature they have, the lack of a subtitle option for the main feature stings a little bit. As much as I may not like to admit it, my hearing is waning as my hair grows greyer and my eyesight slowly drifts away. So, having a subtitle option for a film that’s full of talking is a huge desirable. Thrown on top the fact that sometimes in the audio commentaries, somebody will mention something in relation to the dialogue on screen, and it’d be lovely to know what that dialogue was. It’s a small quibble, and I understand the effort that goes in to creating subtitles for films, it’s just that in a mine of material, this seems like an odd omission.

This is as essential a release as you could imagine. Australian film history in one neat, exhaustive, box. Buy it now. And heck, pick up a copy for your mum for Christmas while you’re at it.