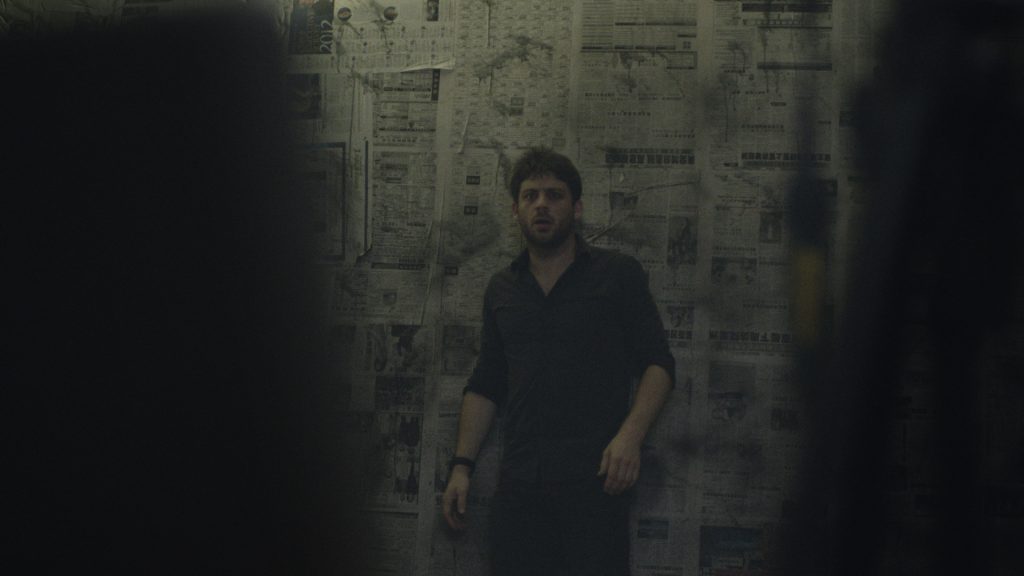 
Contrary to popular belief, reviewers don’t enjoy giving films a bad review. I love Australian cinema, so it saddens me when a film comes out that – in my eyes – doesn’t succeed. With that in mind, let’s delve into the dark world of Observance.

Parker (Lindsay Farris) has taken on the job of watching a woman (Stephanie King). Somebody has employed him to sit tight, watch this woman, report back on what you find. Through flashbacks and distorted vignettes, we gather that Parker has lost a son. Billed as a horror/thriller, Observance is an essay in conflicted ideas.

Made for a mere $10,000, Observance is as low budget as they get. You wouldn’t know that though as it does look like a film that was made for much more than that. The set design of the apartment that Parker watches from is wonderfully made up of walls covered in sticky newspaper and disturbing jars of black liquid. Moody images of waves crashing against cliffs intercut the creepy spying that Parker does. The uneasiness that is presented here that unfortunately is never monopolised on.

Those jars of black liquid simply exist without explanation, alongside the strange medallion that Parker wears around his neck, or the bizarre dreams he has at night. There is a lot of intended symbolism and meaning to be gathered from what’s presented here – but unfortunately none of that matters when no context for the symbolism is provided. There appears to be a mysterious group behind this surveillance operation, but their existence is never explained, nor is the reasoning behind Parker taking this job provided either. When he voices his displeasure at what he’s doing, instead of leaving, he seemingly just sticks around.

Director and co-writer Joseph Sims-Dennett has created a confusing film here. It looks great, and Lindsay Farris gives his all as Parker. There are some fine visual elements at play that are unfortunately tonally empty. What may have been clearly explained on set, or within the script, has been lost in the transference from page to screen. Observance feels deliberately obtuse, possibly to make you feel like there is more at play here, but unfortunately it doesn’t provide enough elements to warrant its confusion. It’s a disappointing effort as it feels like with a greater budget and more time, there could be a good film here. As it is, Observance is simply a confusing film that wants to be so much more than it is.