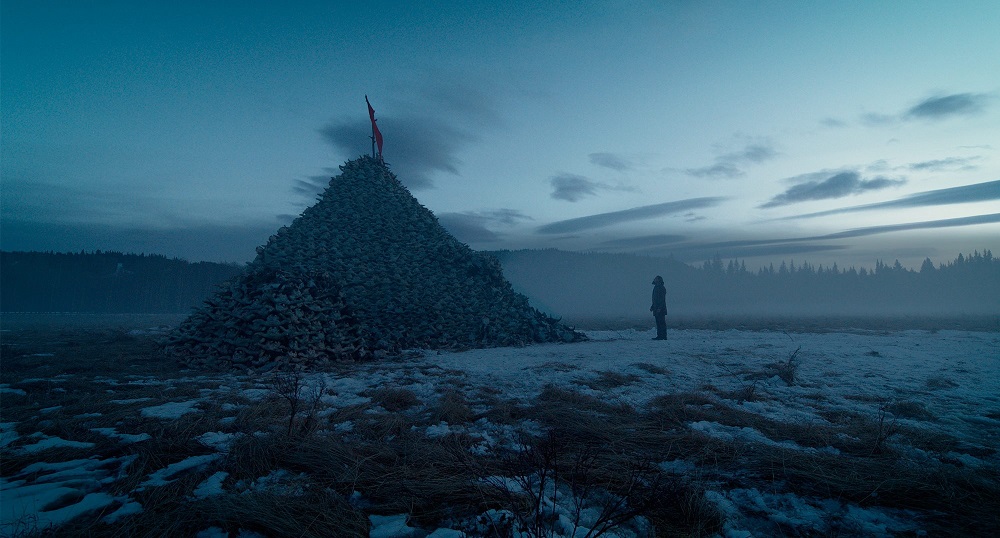 The Revenant is a film I would have loved if I were fifteen and just getting into ‘serious’ films. I would have adored its quiet ‘meditative’ stretches. I would have wallowed the incomprehensible dialogue. I would have shouted to the hilltops about the sublime cinematography. I would have tattooed Inarritu’s name on my arm and left all future children at his alter. But, I’m not fifteen and the amount of ‘serious’ films that I’ve seen in the years since I was fifteen have given me more to consider about filmmaking and storytelling than 156 minutes of Leonardo DiCaprio in the wilderness manages to do.

Alejandro G. Iñárritu teams up with Birdman cinematographer Emmanuel Lubezki to tell the story of Hugh Glass. Glass – portrayed here with earnest gruffness by Oscar hopeful Leonardo DiCaprio – is a man who survived a bear attack in the harsh American mountains, and left for dead by his crew, manages to make his way back to civilisation. The crew that abandons him is made up of John Fitzgerald (Tom Hardy), Bridger (Will Poulter) and Captain Andrew Henry (Domhnall Gleeson). On paper, The Revenant is a story about survival and redemption, about the lengths a man will go to enact revenge. That sounds like a much better film than we’re given.

Iñárritu is a competent director – there’s no denying that. Birdman worked well enough, relying possibly a little too much on technically flourishes to prove its point. Earlier Iñárritu films like 21 Grams, Babel and Amores Perros all used extremely sympathetic and heart breaking themes to tell their various stories – some to better effect than others. Yet, when it comes to telling a story that is less about histrionics and more about pure human emotions, he fails as a director. It’s one thing to show great visuals – thanks to Lubezki’s pitch perfect cinematography – but it’s another to combine those visuals with a compelling story and create a canvas for actors to create great characters with.

It’s with this cooking pot of a combination that Iñárritu struggles to tell a compelling story. DiCaprio holds the film on his shoulders, but for the most part he feels supremely miscast as the role of Glass. Maybe DiCaprio’s performance as Jordan Belfort in The Wolf of Wall Street has stuck in my mind too long – especially as he manages to imitate the same groans here as he crawls out of his makeshift grave as he did in The Wolf of Wall Street‘s drugged out crawl to a lambourghini. His portrayal of Glass is all grunts and groans – which is understandable given the ferocious bear attack that he survives. However, I couldn’t help but wish that the king of groans and grunts – Tom Hardy – was playing the role of Glass instead. It’s an odd complaint that DiCaprio is simply too good looking to play this role, but it’s what I’ve taken away from his performance here as not once did I ever feel that I was seeing ‘Hugh Glass the character’ on screen, but rather only ever ‘Leonardo DiCaprio plays Hugh Glass the character’.

Tom Hardy’s Fitzgerald is a mammoth beast of a man, a man who has survived previous attacks on his life. He appears as an eternal force of nature, conquering most that stray in his path. It’s an interesting performance that is accentuated by Hardy’s trademark mumbling that makes half of his dialogue incomprehensible, yet this surprisingly works well for his character here. For the most part, he is outshone by Will Poulter’s Bridger – a character who feels like the moral compass of the film, and is certainly the most sympathetic individual – at least more sympathetic than DiCaprio’s Glass.

Unfortunately, Iñárritu’s direction appears to be trying to make some sense of the madness within the story, but instead it’s all lost under a sea of pretension. Is this supposed to be a parable about man and God? Or is it a look at the reclamation of the land by the indigenous people who live there? I’m not entirely sure as I don’t think the film is entirely sure either. Moments where Fitzgerald talks about a squirrel that his Uncle called God and then subsequently ate should be profound and show the ability of man to conquer the spiritual world, yet instead it becomes something that is more amusing than impactful. A moment in the latter half where Glass scratches a message about the death of his son into ice feels like Iñárritu is trying to show the determination of Glass to achieve his revenge, but instead it comes across like a love letter left in the snow – less Kilroy Was Here and more ‘Kevin Hearts Winnie’.

Glass appears to have visions of his long lost wife and a life before this madness that I guess was thrown into the mix to give him a bit of a backstory. These visions feel like Iñárritu is trying to imitate the mysteriousness of Terrence Malick without being able to pull off the same emotional pull that Malick has managed to finesse throughout his films. They feel as though they’ve been implemented to simply give Glass a backstory that isn’t evident in DiCaprio’s portrayal here. It’s telling rather than showing and it comes off cheap and unnecessary.

As for the rampaging Sioux warriors who appear like Jason Statham in Fast & Furious 7, ready to enact heinous violence whenever the plot requires, the less said the better. The use of them as a plot device rather than real empathetic characters is damning and hurts the film more than it should do. A sub-plot about a missing daughter feels shoehorned in to give them motivation, but they never amount to anything more than bloodthirsty enemies.

As mentioned, Lubezki’s cinematography is stunning to look at. His use of natural lighting is so superb that one could make a case for this film possibly being much better if there were a score only version available to view at the cinema. Yet, just like the interminable The Good Dinosaur, what good is a great visual if there is nothing to fill the screen with meaning? One can look at how Roger Deakins used the pitch perfect cinematography in Sicario as a textbook on how to make the visual element of a film its own character within the film.

On the Rocks Review – An Outdated and Noxious Ode to Privilege

Lubezki’s cinematography is almost too good as when the aforementioned bear attack occurs and a later bison stampede happens, the CGI stands out a little too much. I’ll admit I may be wrong here as it is fine CGI, but against the pristine snow draped vistas and forests they do stand out as being digital creations rather than being something that is real.

I really wish that I had come out of The Revenant excited and moved by what I had just seen. Instead, for the most part I felt uninvolved and tired by what was being displayed on screen. A massive disappointment is an understatement, The Revenant is a missed opportunity at creating greatness – something which a different director other than Iñárritu could have achieved.