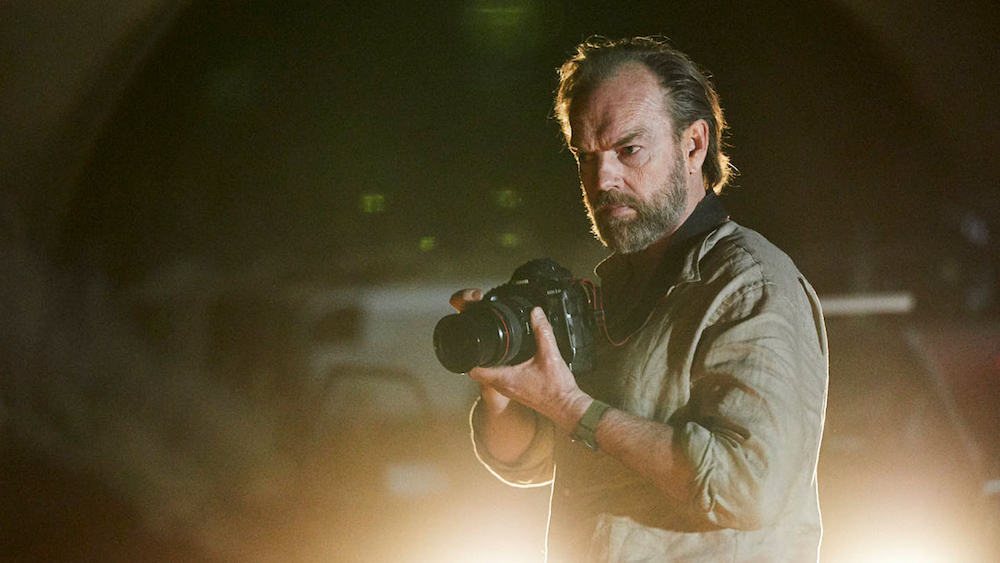 Hearts and Bones Review – A Rare Thing: A Moment of Healing

As humans, the way we process pain can seem mysterious. Many of us think of pain as a purely physical phenomenon.  We get injured, we bruise or bleed, we heal. But when lives are on the line, it is sadly not that simple.  For generations, many saw difficulty recovering from a deep pain or trauma as a weakness of the body or the mind. Of course, we know better now. But that that does not necessarily make it simple or solved. When you add the complexity of this to a situation, like marriage, that provides an endless array of variables, this becomes an even more difficult and strikingly, lonely process.

In Hearts and Bones, despite a lack of exciting visuals, director Ben Lawrence manages to strike a stunningly even balance. When you have a recognizable star, particularly in Australian cinema, like Hugo Weaving, it would be easy to let him dominate the narrative, and that would be a mistake. His character, Dan Fisher, is a war photographer and, through his lens and otherwise, has seen some of the worst that society has to offer. After years of this, it has finally caught up to him psychologically and it is a harrowing experience to watch Weaving succumb to this in a physical way.

That balance mentioned is maintained eventually by the plot crossing Dan with Sebastian Ahmed (Andrew Luri), a taxi driver who has a connection to one of the war-torn countries Dan has photographed in the past. In the first half of the film, it does feel slanted towards Weaving in terms of screen time. But the script masterfully weaves Sebastian into the plot, so that, by the conclusion, it feels like Luri’s film as much as Weaving’s.

Despite the combination of Luri and Weaving, in some ways, the film really opens up and examines pain (and PTSD) through the two marriages. It may be easy, from the outside looking in, to wonder why these men do not simply open up to the women in their lives (played by Bolude Watson and Hayley McElhinney respectively). But that takes away from the judgment and pressure of simply being a man in a patriarchal culture, let alone be involved in subcultures that demand constant toughness that may feel almost natural to being, or at least becoming, a man.

These subtle differences played out between a man who has chosen a dangerous occupation and another man attempting to get right with a situation he is born into is masterfully handled, culminating in a conflict between the two that is as visceral as it is heartbreaking. The loneliness inherent in the level of psychic pain comes through even when their spouses are supportive, an already herculean task. The friendship (conflicts included) truly highlights the importance of a shared experience. When something this violent and drastic happens, there is a necessity for not only general empathy, but honestly true understanding that only comes from a similar trauma.

Probably the most memorable and important scene in the film is when Dan attends a support group for people with similar experiences. It is a master class in acting from Weaving as you can feel and witness his body relax in reaction to the gallows humor of the group. Additionally, without the need for a lot of conversation, these people inherently know that everyone in the room simply gets it. There is no need to protect one another from terrible truths, just an implied understanding of how difficult surviving has been.

Hearts and Bones, while not a great film by any stretch of the imagination, is incredibly well cast. And there should be some respect given to the director in either coaxing great performances from his actors, or simply knowing that Weaving and Luri are more than capable and letting them explore this pain, both together and separately. This film, even when it doesn’t particularly come together narratively, feels like that rare thing, a moment of healing.