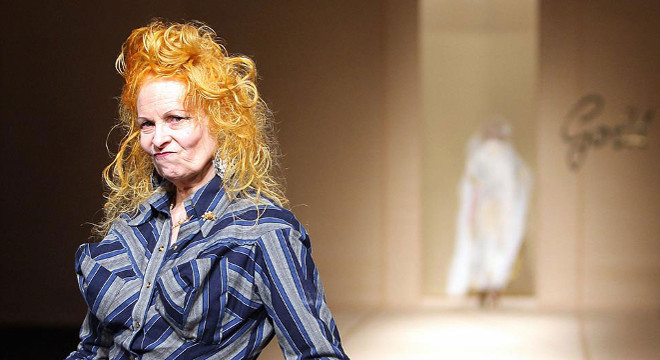 As the documentary Westwood: Punk, Icon, Activist started to roll out around the world, the subject of the documentary, Vivienne Westwood, tweeted the following:

As searing an indictment of first time documentarian Lorna Tucker’s film as there ever could possibly be. And, this criticism from the films subject is damn well necessary to have in mind before watching this rather engaging film. Granted, Westwood does a good job of denouncing the importance of such a film right from the get go, asking an off camera Tucker ‘what the fucking point is’ of a film like this.

A bit like the earnest and respectful RBG, Westwood is very much concerned with pinpointing the history of Vivienne Westwood, noting the path she took to becoming the raucous, tear-down-the-man fashion designer that she grew into. If you’re like me, and are a bit of a Westwood-luddite, well, this documentary will certainly give you a great impression of who Vivienne Westwood was.

Use of archival footage and talking heads colour Westwood’s rise in punk-laden England in the seventies, as well as her role in creating the ‘look of punk’ that the Sex Pistols employed. As a historian takes out an aged muslin shirt from the archives, explaining the straight jacket aesthetic, you can’t help but feel that this kind of presentation is simply a little too staid for a character like Vivienne Westwood. Via the less assured direction from Lorna Tucker, this basic exploration of Westwood’s history feels more like a Sunday afternoon stroll through a museum rather than the still-raging-at-3am anarchy laden concert that it should do. It’s simply all too respectful.

And yet, oddly enough, in some ways that’s what the name ‘Vivienne Westwood’ has become. As her designs become more sought after and desirable, stores continue to appear around the world with her name above the doorway. While Westwood ‘designs’ a lot of the work that appears in the shop, a fair amount of that design work falls on her partner, Andreas Kronthaler. Moments of tenderness between Kronthaler and Westwood show the signs of a love that has kept them together for almost thirty years. An energetic, vibrant photoshoot is beautifully hilarious, showing two people living in harmony.

What is less harmonic is the relationship that Vivienne Westwood the person has with Vivienne Westwood the brand. At one point, in a dimly lit house, Westwood announces to the camera that if she wanted to take any and all of the designs off the market, she could. They have her name on them, after all. Yet, in another scene where she accosts a new sales assistant for being ignorant of the design she’s peddling, we’re told that there is more at stake than simply Vivienne Westwood the person. There is a micro-industry of some 400 people working under the Westwood banner. Remove those designs, and you remove the jobs of those many people. Capitalism has, as it always inevitably does, come calling.

This rise in demand for Westwood’s designs, and in turn, her lack of interest in the business side of her label, has made way for Kronthaler taking over the ‘design’ aspect of the business, leaving Westwood free to engage with a core passion of her own – activism. Which leads us back to Westwood’s main criticism with the documentary – there is simply too little dedicated to the ‘activist’ part of who Westwood is as a person. And, given the title of the documentary is Westwood: Punk, Icon, Activist, it’s a shame that the ‘activist’ side of who Westwood is as a person is so poorly displayed. The punk and icon parts are part and parcel with the designs and legacy of Vivianne, yet, the activist area is who she has transformed into after all these years.

Which raises a salient question about documentaries (especially ones where their subjects are still alive and are a vital part in getting their story told): at what point does a documentary owe it to their subject to show them for who they envisage themselves to be? Or, is it a documentaries purpose to simply portray the documentarians perspective of that person?

Unfortunately, as with RBG, Lorna Tucker’s direction is lacking either perspective. It wants to embrace the icon that is Vivienne Westwood, but lacks the verve and vitality that makes Westwood the person that she is. One can’t simply put images on screen and expect the ethos of one person to carry through. It’s unfair to compare a newly minted documentarian to one of the greatest to exist – but, Lorna Tucker is no Errol Morris, and in turn, Julie Cohen and Betsy West (RBG) are no Errol Morris.

What’s lacking with this new brand of documentary focused filmmakers is the injection of the directors personality into the mix. There is simply too much respect and admiration for their subjects, with a feeling that the filmmaker is simply excited to be able to spend time with an idol, rather than actually examining who that idol is. Don’t get me wrong, these films are still engaging (heck, they’re a long way from the bland and basic series of I Am a Deceased Actor films), it’s just that with subjects like Ruth Bader Ginsberg and Vivienne Westwood, I shouldn’t be struggling to remember anything of value from the films about their lives. I’m entertained and engaged when I see the films, but I’m left wanting.

Which is where Vivienne Westwood’s prime argument against the film probably stems from. If this is the one item that people will pick up about Vivienne Westwood, the one item to find out who she is as a person, then what does it say about her? Sure, it tells us who she was, and how she got there, but it leaves little suggestion as to how Westwood wants to be remembered – as someone on the frontlines protesting against fracking and climate change.

I’m reminded of hearing people grumble about Q&A sessions with Richard Dreyfuss, where he’s asked one question and then goes on an hour long run about politics and the world, when really they’re all just there to hear Jaws trivia which they could get from wikipedia. And, maybe this is a backhanded compliment, but, there’s little in Westwood: Punk, Icon, Activist that you couldn’t get from Vivienne Westwood’s wikipedia page. Part of me wishes that Westwood had taken a page out of American artist Narcissister’s book, and simply directed her life story herself in the great documentary Narcissister Organ Player. But, then, as Westwood would say, ‘what’s the fucking point? Just read a book.’