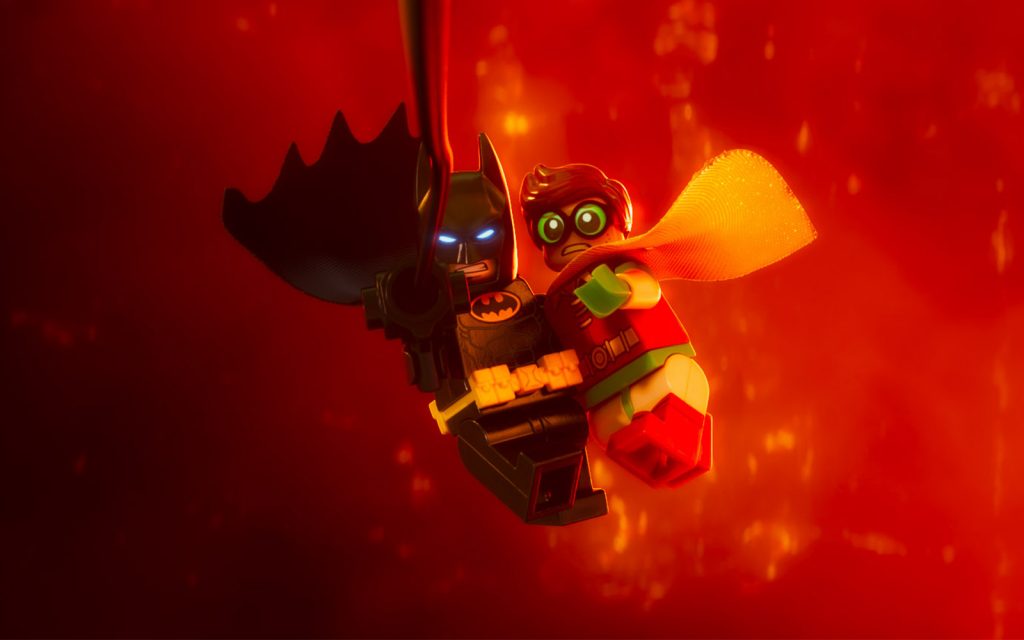 The grand imagination of Will Ferrell and his son was brought to life in 2014’s much loved The Lego Movie. What could easily have been a feature length advertisement for little plastic blocks instead turned into being a great, enjoyable fable about the power of imagination. Instantly reigniting the minds of those who grew up with Lego, The Lego Movie had people pushing to find out if their parents kept their childhood playthings so they could rediscover that joy. One of the surprising elements of that film was Will Arnett’s ego driven Batman character. The fan reaction was so strong that it was inevitable that he would get his own film.

Which leads us to Chris McKay’s The LEGO Batman Movie. Arnett returns as the Dark Knight of Gotham – a character who finds himself desperately alone in his vast estate. In an explosive and immensely enjoyable opening (at times feeling like it’s taking a nod from 2016’s Deadpool), Batman manages to break his arch nemesis’, the Joker, heart by saying that he fights other villains. At an extravagant event where Commissioner Gordon hands over the reigns to his daughter, Barbara (Rosario Dawson), Batman accidentally adopts a son, Dick Grayson (Michael Cera). Grayson (as Batman lore dictates) eventually becomes Batman’s sidekick, Robin, and through a series of egotistical events, Batman finds himself and Robin stuck in Arkham Asylum with every single Batman Rogue that exists.

There is a lot more that occurs within The LEGO Batman Movie, but to leap into the ‘plot’ in too much detail would be to rob much of the fun and excitement that comes from each reveal that appears to one up itself at every turn. The seemingly random, frenetic energy that powers the film is naturally drawn from one of the mad minds behind the excessively energetic (almost pure red cordial level) Robot Chicken – Chris McKay. The story is gathered together by five different writers, which in itself also adds to the feeling of a kid getting to play with the biggest toybox in the world – everything is in there, and they want to touch and play with everything just once. At just under two hours long, The LEGO Batman Movie can often feel exhausting. If sitting through one episode of Robot Chicken and trying to keep up with everything going on on screen proves difficult, then you’ll struggle with The LEGO Batman Movie.

For fans of Batman, there is a lot of respect and adoration delivered to the lore of everyone’s favourite billionaire crime fighter. Given the self referential nature that these LEGO films have established, it opens up the opportunity for references to all the different Batman films that have come prior to this one – this alone makes for a great short moment where iconic scenes from the past films are presented in LEGO form. Much has been talked about the inclusion of bottom drawer villains like The Condiment King, and how great it is that a Batman film would want to touch on such characters that would never appear in a Zac Snyder driven extended universe. This kind of deep lore diving is enjoyable and always appreciated, but it then does raise the question of why the climax heads the way it ends up heading.

It’s hard to discuss these points which really took me out of enjoying the film, without heading into spoiler territory, so I will wrap up the ‘non spoiler’ section here. Will Arnett’s voice acting here is simply brilliant – as anyone who has watched an episode of Bojack Horseman would attest – and his Bruce Wayne/Batman is a superbly narcissistic and arrogant individual that he feels like a brand new version of an iconic character. It’s hard to make something that has been around for so long feel new again, and it’s a testament to those involved that everything presented here feels fresh and exciting. The animation is, as expected, brilliant. The screen does feel too busy at times, making it hard to focus on what’s supposed to be happening – almost as if it’s trying to dazzle the viewer with bright, bountiful excess. The LEGO Batman Movie feels like it could have been a gamble that wouldn’t have worked, but the same can be said about the original film. This entry in the series shows that the format has legs. Now it’s up to the LEGO NInjago film to see if audiences will respond to something that is less familiar to them than a superhero.

Through the events of the film, The Joker ends up the Phantom Zone (an intergalactic space prison from the Superman lore) and manages to break out with every other rogue that is being contained within the Phantom Zone. If this LEGO film was to stick with an internal logic (ie. this particular entry focuses on DC properties, so therefore only DC properties would be able to be used within the story), then the villains from external IP’s would not appear. However, as this film appears to take place within the universe established within The LEGO Movie (ie. that of a grown man/child’s LEGO collection/toy box), we have villains from Harry Potter, The Lord of the Rings, The Matrix and Dr Who appear. So, Sauron, King Kong, Voldemort, Daleks, Agent Smith, the Wicked Witch of the West, all appear to battle Batman and co. in a truly chaotic and (at times) incomprehensible flurry of action. Anybody with an interest in pop culture and a hyperactive imagination would have spent countless nights talking about who would win in a battle of Batman versus, well, Voldemort or King Kong or literally every other villain. It then makes sense that a kid would want to battle everybody up against their favourite heroes. On top of this, it also makes sense that they would then slap Alfred the frail butler in a Batman costume to also join in the fray.

In this pseudo-Toy Story series (which really, if you think about it, that’s all these LEGO films are – a slightly askew version of that Pixar classic series), this concept of merging intellectual properties is interesting in the way it raises a bunch of different hypothetical questions (after all, this could only ever exist in an animated film). Almost all of those questions are immediately redundant as it all boils down to the audience watching a almost two hour film of a kid playing with all of his toys. For me, I found that aspect tiring and tedious, and wish that they’d instead pitted Batman against all of the foes that are presented at the beginning of the film. I found there was little to gain from watching Batman battle King Kong or Sauron – but, then again, maybe I’m just a cranky old man who remembers that it was never kosher to mix the He-Man toys with the TMNT toys.