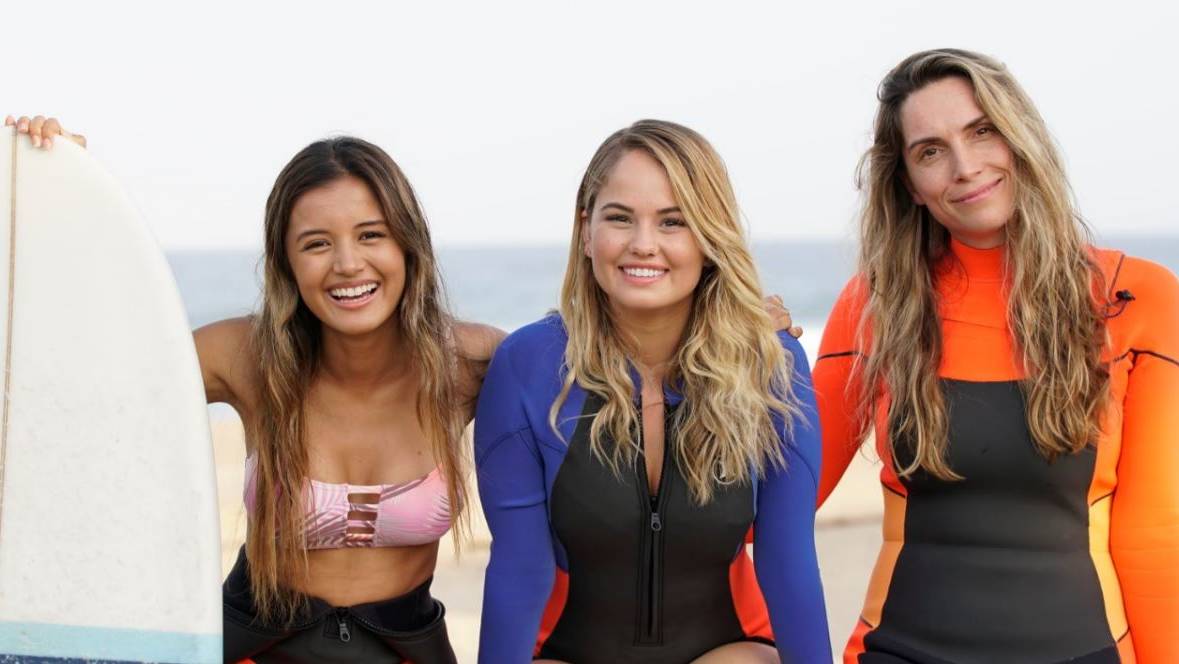 For a country that’s well known for its sun drenched beaches, with waves that roll on forever, Australia surprisingly doesn’t have that many surfing films. On top of this, the surfing films that do exist are often stories of tragedy driven by masculinity. One would think that after the raucous, two fingers up, stuff the blokes ending to Puberty Blues way back in the 80’s, we would have been awash with flicks about surfing chicks. Alas, it’s taken til 2017 to get another non-documentary surfing film featuring women leads.

Director Rhiannon Bannenberg and writer Georgia Harrison have teamed up to tell this teen focused tale of Cora Hamilton (Disney TV star Debby Ryan) and her struggle as a supermodel – a life she is ushered into due to it being the one her mother wishes she could have. After a disastrous photo shoot that ends with Cora tumbling down a staircase, and in turn amplified into public shaming via social media, Cora high tails down to Australia to be with her Aunty. After a high sheen, bright lights, big city opening, Rip Tide takes a good half hour to get into its intended groove. But once it hits the surf, and the salt water splashes on the screen, there’s a wonderful energy that starts to permeate throughout the film.

See, Cora has lived the life her mother has wanted her to live, but not the life that Cora wants to live. Without the motherly love and support that she needs, she not only misses her high school graduation, but also misses out on doing the things that she wants to do. Namely, have a life, have friends, and also become a designer. Naturally, with no real guidance or support, Cora seeks out the time in her life where those things existed – her childhood. Memories of growing up with her mother and her Aunty in Australia help drive Cora to rediscover and reground herself.

Cora’s Aunty, Margot (Aussie actress Genevieve Hegney doing her best with an American accent), is highly supportive of her ring in niece, providing her with a bed to sleep in and a community to engage with. Thankfully, Margot isn’t just set dressing for Cora’s self-improvement. Margot is still mourning the unexpected loss of her partner, a death that is tied to the thing she loves the most – surfing. However, Margot is also supported by a wonderful community who rally around those in need, encouraging everybody to partake in a round of stress relief, aka coconut baseball.

When Cora is tasked with creating swimsuits for the towns upcoming 100 year anniversary of a group of women challenging the town and hit the waves to surf, she initially stumbles. With the help of her new friend Chicka (an exuberant Naomi Sequeira), she’s able to pull the show together. Naomi Sequeira is a face I haven’t seen in Australian film before, but I truly hope that we get to see more of her as every time she’s on screen, she brings a unique, joyous vibe that lifts everything up. It’s amazing what a genuine smile will do to the mood of a scene, and when Naomi smiles, you can feel everyone else lift because of it.

The predominantly woman driven aspect of Rip Tide shines on screen, with a handful of blokes on screen being outnumbered by a town full of women. Behind screen, the vision of Rhiannon Bannenburg and first time feature film writer Georgia Harrison are brought to life thanks to cinematographer Tania Lambert. Rip Tide’s bright cinematography works so well with the story, helping give the impression this is a higher budget film than it is. Lambert pulls out all stops to make sure that the surfing scenes look superb, getting right into the mix with the actors and surfers to get the best shot. Here’s hoping that Bannenburg, Harrison and Lambert have strong, productive careers making films in Australia.

Yeah, there’s a routine predictability to Rip Tide, with things going exactly how you’d expect them to, but what makes this a thoroughly enjoyable film is the earnest efforts from all involved to make this a genuinely warm piece of entertainment, and not just another rote teen flick. So much so that when Cora interacts with some random horses on a beach, your first reaction isn’t to roll your eyes and cringe, but to appreciate the innocence of the moment. The love of community, surfing, Australiana, and family shines in this positive, kind hearted film. It’d take the harshest cynic to not embrace what Rip Tide is selling.

The DVD special features are standard EPK stuff – behind the scenes puff pieces that would usually feel like run of the mill clips, but do in fact carry across the warmth that the film has. There’s a genuine sense that everybody involved had a wonderful time making the film, with some great friendships being forged.