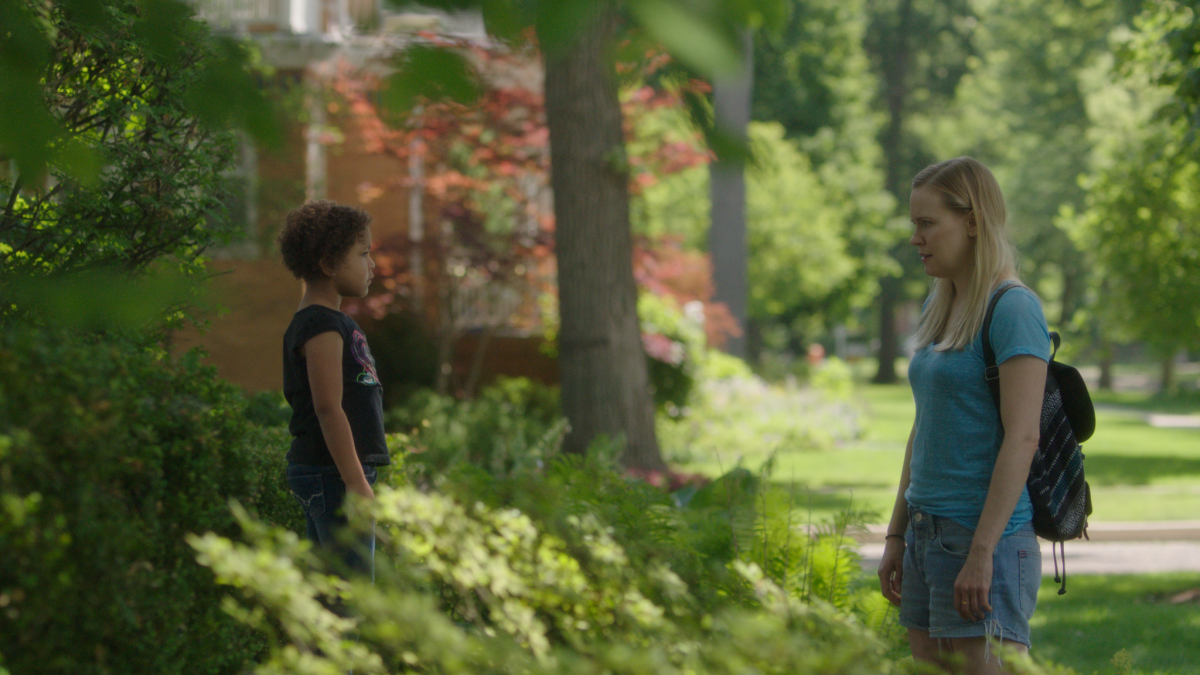 Joining the seemingly never-ending list of millennial-made films about adults learning life lessons from kids is the eagerly sweet Saint Frances. Directed by Alex Thompson, and written by and starring his partner, Kelly O’Sullivan, in the lead role of Bridget, this is a treat of a film that rewards with great performances, a charming demeanour, and a progressive attitude.

Bridget is a 34-year-old woman forced into arrested development by society at large, working as a server, almost complacent about the future of her life. When she meets gentle twenty-something, Jace (Max Lipchitz), the two hit it off, spending the night with each other. After they both wake up covered in period blood, with Bridget running late for a job interview as a nanny, their relationship (of sorts) provides the foundation for the narrative of Saint Frances to allow its lead character to grow as a person.

The initial interview with mothers Annie (Lily Mojekwu) and pregnant Maya (Charin Alvarez), and their daughter Franny (Ramona Edith Williams), is tepid, showing a clear indication that Bridget’s personality simply is not a good fit for Franny, nor the older mothers. O’Sullivan’s excellent script reveals neat and immersive character building through naturalistic manners, with Bridget being given a tour of the family home and making honest remarks about not particularly liking kids, or about her relationship with a religion that changed her worldview both negatively and positively.

Kelly O’Sullivan’s exceptional performance brings vivid reality to a character who lives in a world of wilful ignorance, but does so with the perspective of earnest progressiveness and positivity. That religious upbringing leads her to falling pregnant to Jace, after having used the pull-out method of birth control for eight years. As with much of the thematic exploration in Saint Frances, the matter-of-fact way that Bridget decides to have an abortion is refreshing and part of why this film succeeds more than it stumbles. There is a discussion with Jace, and it’s clear that while Bridget respects his opinion, it’s not going to change her mindset at all.

The welcome modernity of Saint Frances brings a new vitality to this kind of well-worn narrative, and it’s the clear bond between O’Sullivan and Thompson helps make this positively-left leaning film work. Yet, the slightly utopic ideology of equality, respect, and fairness does carry an eyebrow lifting aspect to the plot, with the narratives stringent adherence to the ‘learn a life lesson’ template rewarding Bridget’s growth at the cost of the supporting characters’ lifepaths.

Take Maya’s postpartum depression for example, at a time where she clearly needs assistance and tenderness, we’re thrust away from that, with O’Sullivan’s script instead giving Bridget a moment of bravado, where she defends Maya and Franny against a ‘Karen’ in a playground who demands that Maya show some decorum and ‘hide herself’ while she breastfeeds her infant son. This is a moment that amplifies the character of Franny, showing the politeness she has been brought up with as she diffuses the situation with kindness, but it also works to heighten the growth that Bridget is going through. It’s the pushing down of one character growth to amplify another.

And while that is what most basic narratives are about, it’s hard to look past the fact that Bridget’s growth comes from her interaction with two women of colour. Annie and Maya are both successful women, and Lily Mojekwu and Charin Alvarez are given some great moments to show their acting skills, but every step comes at a point of allowing Bridget to grow. O’Sullivan does recognise the importance of contrasting Bridget’s white-feminism with her counterparts – a judgemental ex-schoolmate who is another skewed-version of a Karen, living with the mindset that everyone is existing in service of her and her family – but my cynical side can’t help but consider how much Saint Frances elevates Bridget above the peripheral characters.

Especially when considering the titular character of Frances and how cookie-cutter her ‘wiser than her age’ intelligence is. While Ramona Edith Williams is charming as Franny, managing to counterbalance and pushback against Bridget, this is a character we’ve seen time and time again in this kind of film. Which is where genre-familiarity pushes back against the complete immersion a film like Saint Frances deserves. It’s so sweet and tender, harking from the indie film world where this kind of life-lesson narrative is the bread-and-butter for a vast chunk of that library, but because of a vast amount of insipid entries, you can’t help but feel a good one being dragged down by the bunch.

It’s a weird complaint to have with a film that actively charms and forces you to smile. I thoroughly enjoyed Saint Frances, especially how proudly feminist it is, and how eager Thompson and O’Sullivan remind viewers about the reality of menstruation (and the need to visit a doctor), but I’m also left perturbed by the fact that this is yet another film that’s about women, written by a woman, featuring a predominantly women lead cast, and yet, it’s directed by a man.

Yes, Alex Thompson and Kelly O’Sullivan are in a creative relationship akin to Noah Baumbach and Greta Gerwig, and Alex’s direction is exceptional, presenting Kelly’s script exactly how it should be, but given the authorial voice is so routinely and explicitly recognised as the directors, and the directors alone, I fear that people will walk away from Saint Frances praising Thompson more than O’Sullivan’s work. This is a film that does push back against that mentality, as much as it pushes back against a lot of societal norms, but the taste is still slightly off. With that said, whatever creative offerings both Thompson and O’Sullivan have to offer in the future, I’ll gladly seek out.

There is a wealth of thematic treats to dig into with Saint Frances, more than I can touch on with this review, all of which make this film a genuine delight to watch. The normality that is brought to topics that have been actively ‘othered’ by the media and right-wing portions of society is greatly welcome, making this a high recommendation. Sure, I may not have this nice film high in my mind when it comes to the end of the year, but for ninety-something minutes, I was thoroughly entertained, and sometimes that’s all that matters.