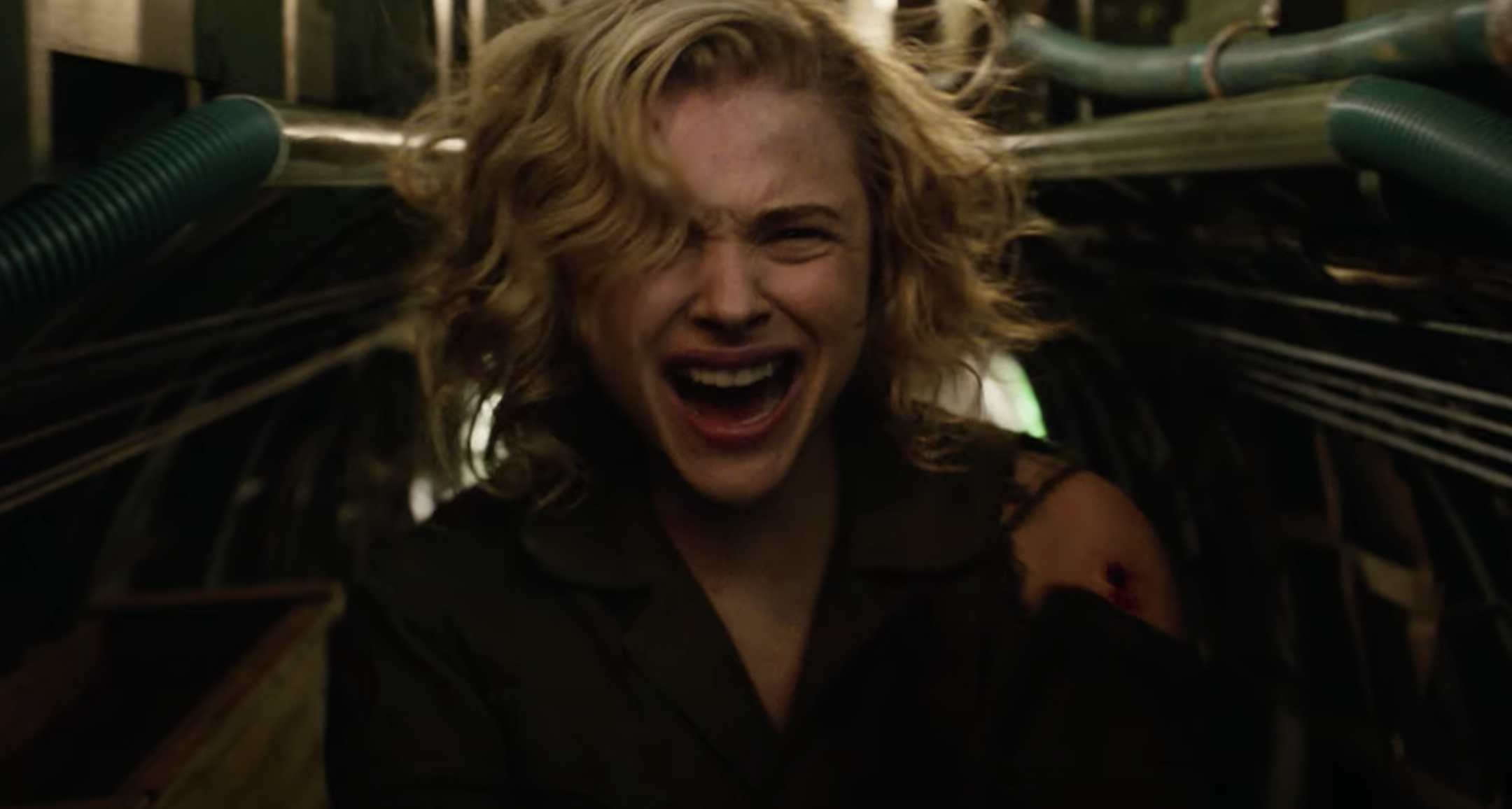 
Shadow in the Cloud stars Chloe Grace-Moretz as Flight Officer Maude Garrett who boards a B-17 bomber in 1943. She carries a mysterious box and orders to be transported on the warplane from Auckland to Samoa with top secret orders. Her all-male crew members immediately deride Maude, stow her away in the lower turret, and ridicule her gender and personality. But their craft is not only pursued by enemy fighters, but has a strange creature aboard that risks Maude’s mission and the lives of the whole crew. Maude must fight this thing by any means necessary and protect her secret package against any threat.

This genre film has unfortunately gained infamy as it was originally written by screenwriter Max Landis, who has been repeatedly accused of sexual assault and misconduct since 2017, with no current legal ramifications for his past actions. The accusations have come from former co-workers and ex-girlfriends, and have apparently been an “open secret” in Hollywood according to anti-harassment activist Zoe Quinn, and have even been supported by Chronicle (first major script by Landis) director Josh Trank who said he had banned the writer during the movie’s filming.

Roseanne Liang and Chloe Grace-Moretz signed on as director and star, respectively, in January 2019, announcing in April that Landis’ script would be heavily rewritten by Liang and focus its attentions towards a more positive female representation based on the changing conversations of today. Landis still has credit on the script based on writer’s guild rules, but the effort still stands. Shadow in the Cloud has the kind of intriguing-at-first premise that Landis was known for delivering with scripts like American Ultra, Victor Frankenstein, and Bright, but one can also feel the intentions of cast and crew to strengthen its core story and use the premise better than just rapid-fire nonsense that most of Landis’ work descends into.

Shadow in the Cloud is frustrating because when you think it might be like a feature-length wartime version of the “Nightmare at 10,000 Feet” story from The Twilight Zone, it then swerves hard into feminist social commentary that grinds the story to a halt. Despite the best intentions from Liang, it still doesn’t work as a story. The problem with the different tones coming from Landis’ script and Liang’s rewrites is that they never truly mesh together organically. It feels like Landis came up with all the fantasy action and literal mystery box to make it an all-out wacky war thriller, and Liang created the more grounded story about what’s really inside Maude’s secret box, alongside the derision she overcomes from her derogatory crew members. One does not work with the either.

Shadow in the Cloud should have been either the wild and goofy fantasy-war B-movie without much care for character or story and only with action and pulp, or the more grounded story of female pilots and officers in World War II who served as diligently as the men but get none of the credit. It feels like if you took this year’s Monster Hunter and have the story constantly divert away from dumb monster action to make commentary on female roles in the military. People have come for one particular thing based on the marketing, and while you can have some truth to your story to make us care a bit more than not at all with these kinds of movies, but this movie has no subtlety or finesse. It’s blunt and boring with its important themes and cheapens both the action and the important themes altogether.

Shadow in the Cloud looks nice enough, with a few moments of bold colour or significant framing to perk up my interest. Chloe Grace-Moretz is a confident action-star, something we’ve never doubted since Kick-Ass, and the anachronistic synth score is kind of fun to listen to in the middle of World War II action. However, the actual action is too chopped-up, no other character ever feels real or interesting beyond Maude, and that one moment seen in the trailer of Maude falling out of the plane before an exploding plane below her propels her back into the first place is just as unintentionally hilarious in the film. Was that supposed to be silly or cool? It’s neither. It’s just painfully stupid.

Even the twist of “what’s in the box” is severely underwhelming. After the big reveal, the movie becomes a hackneyed love story that is never believable or interesting. The two people supposedly in love are only seen meeting or talking once and quite briefly, and we’re then expected to care if they make it or not. I couldn’t remember what the guy looked like let alone if Maude Garrett is really in love with him.

This isn’t a poorly made movie, it’s just one that never becomes more engaging beyond its basic premise. I guarantee that Shadow in the Cloud would have been awful had Landis’ script been kept fully intact because that’s just what his career was before any revelations of sexual assault. As it stands, Shadow in the Cloud has a few moments of intrigue and one or two sequences of pulpy thrill, but its disparate tones and themes never gel together and the attempts at social commentary ring disappointingly false.

The Predator Series Review: Now You See It