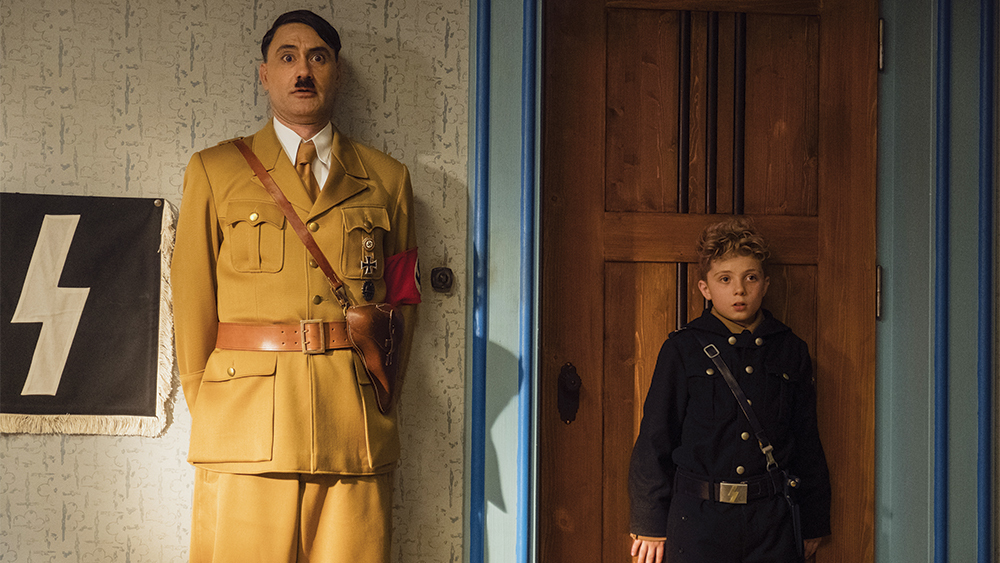 Jojo Rabbit Review – A Deep, Satirical Conversation About the Effects of Fascism

Written and directed by Taika Waititi, Jojo Rabbit stars Roman Griffin Davis as Jojo, a lonely German boy living during the end of World War II and whose world view is turned upside down when he discovers his single mother (Scarlett Johansson) is hiding a young Jewish girl (Thomasin Mackensie) in their house. Aided only by his idiotic imaginary friend, Adolf Hitler (Taika Waititi), Jojo must confront his blind nationalism.

A satirical look at the Nazis and Europe during World War II is not a new concept in film. The Great Dictator, To Be Or Not To Be, Life is Beautiful, and even The Producers (to an extent), have all taken a look at the insanity within the Nazi Party and the madness of Adolf Hitler. Some have been more subtle and even-handed than others, but what surprises me is that many people in the entertainment news cycle have seemingly forgotten about this cinematic history. Taika Waititi hasn’t. In an era when neo-Nazis and white supremacy is rising in prominence in the Western world that makes the existence of Jojo Rabbit all the more vital.

At first, the story of a boy whose imaginary friend is Adolf Hitler sounds odd and treacherous, but Waititi handles such an idea with aplomb because he, maybe better than many directors, understands a child’s perspective. In Boy and Hunt for the Wilderpeople he showed how a child might interpret events around them that are confusing, challenging, and emotional in fantastical or simplistic ways. Now he pits a young boy against the ideas of hatred, bigotry, unbridled anger, and fear, meaning that what we get out of Jojo Rabbit is an important lesson on how to reject these ideas in favour of love and compassion.

This is still a Waititi film so it’s quite a fun one for the most part. The officers in the army, the ridiculous nature of training children to uphold a crumbling regime, and the small details of army uniforms being made of paper due to lack of materials or the ludicrous ideas that the German people had about Jews are all amplified by the casting decisions. You don’t just cast Stephen Merchant as a Gestapo officer because he’s tall, or Sam Rockwell for his dance moves, as such, their presence elevates the satirical look at Nazism.

When seven members of the Gestapo walk into a room, every single one of them greets people with individual “heil Hitlers” which makes the scenario take five times longer than it should, only adding to the paper-thin nature of the effectiveness of this regime towards the end and amplifying the ludicrous nature of their existence via comedy. Of which, Waititi uses as a means to tear down scary ideas, proving that with clever touches of character, tone, and style, we can laugh at the Nazis while still knowing how awful they were.

Roman Griffin Davis is wonderful as Jojo, a boy so wrapped up in the Nazi ideology that it takes him the whole film to realise that Jews don’t have horns and Hitler is an asshole. Davis plays Jojo with a blind naiveté and bluntness that feels instantly believable in the world Waititi establishes, and when he starts to understand what the world is like around him, you best believe I was rooting for Jojo to keep making the right decisions, namely, run away, and to keep bumping into his sweet-as-hell best friend-turned child soldier Yorki (Archie Yates).

Thomasin McKenzie continues a great streak of solid performances starting with Leave No Trace and more recently in True History of the Kelly Gang. As the older and more pessimistic Elsa who is trying to survive by any means necessary, McKenzie starts to become the sister that Jojo was never able to have, and maybe if he did have a sister long ago, things may have turned out differently for him and his mother.

I enjoyed supporting performances from Merchant, Alfie Allen, and Rebel Wilson, the latter of whom I usually can’t tolerate but when used sparingly here she’s tolerable. Scarlett Johansson is receiving large attention for her role as Jojo’s mother Rosie and deservedly so, but her actual role in this film caught me by surprise. She makes a massive, eccentric impact on the narrative, sinking her teeth deep into a role with so much weight and importance behind it, making her absence later in the piece be felt in the best way. Her presence means something to the characters and defines them going forward.

Sam Rockwell immerses into a role that demands a level of emotional complexity beyond just being some Nazi officer full of hatred and greed. His Captain Klenzendorf represents the father that Jojo is missing, and at every step of the way Klenzendorf is actually there to help him in ways that can never be too obvious for fear of death. Rockwell gives another terrific performance, reminding us why he’s an Academy Award winner.

Jojo Rabbit, is more than Oscar bait; a wild premise incorporating historical importance, modern relevance, and thick social commentary performed by a few actors that awards bodies like. Jojo Rabbit seeks a deeper conversation about the effects of fascism on young minds, how tempting it can all be to be given power where you would never be able to get it before, and the incentivisation of blind, uninformed hatred. This isn’t like The Boy in the Striped Pyjamas where the boy’s innocence is a source of tragedy, instead Jojo takes command of his story and by the time the war has ended, he’s already on the path to being a better person, someone who’ll grow up to do the right thing and encouraging others to do so too.

Plus, he gets to kick the imaginary Führer friend out of a window like a superhero while spitting at him “Fuck off Hitler!’.

Jojo Rabbit is well-shot by brilliant cinematographer Mihai Mălaimare Jr., giving everything this colourful quality that is period-accurate seeing as Germany embraced a colourful pop mentality in their homes and architecture as a result of thinking everything was going to be just fine. The production design from Ra Vincent is responsible for this accuracy, landing us in the world of 1945 Berlin, immersing us in the reality of the day, especially in some of the climactic assault scenes. I did find that Michael Giacchino’s store, while nice and sweet on its own, could have been better integrated into the film seeing as he is one of the best composers working today.

Jojo Rabbit will not be everyone’s cup of tea. It confronts these ideas of Nazism and fascism head-on in a satirical way that I responded to with open arms. This is a comedy, sure, but it knows when to be tense and emotional and have a real meaning. Waititi is not the kind of filmmaker to always resort to the joke instead of what’s necessary to the story. All of his films start in eccentric and wild worlds but eventually reach a point of deep pain and emotional turmoil which is the whole reason to make said films in the first place. Jojo Rabbit is no different and thanks to winning performances and a deft directorial hand, I left the theatre enlightened yet delighted at seeing a story so necessary come to such brilliant life.

Writer: Taika Waititi, (based on the novel Jojo Rabbit by Christine Leunens)