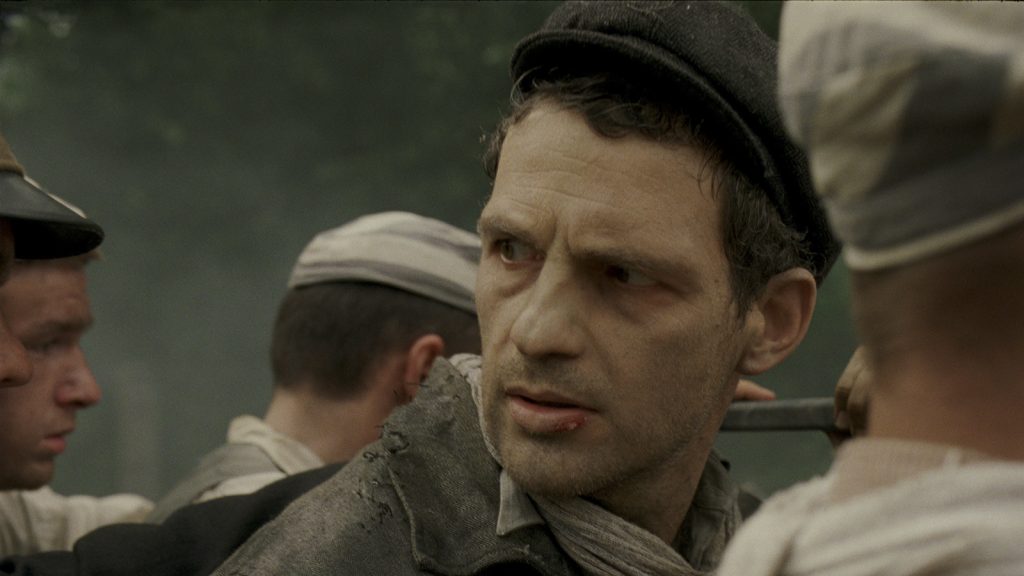 Upon the screen turning black and Son of Saul’s opening text appearing on screen, the lady who I found myself sitting next to commented to her friend ‘this isn’t another holocaust film is it?’ It appears that her tolerance for great cinema that challenges the viewer was quite low as about halfway through the film, her and her friend decided to leave. I mention this mostly because unlike most holocaust films, Son of Saul is not an oppressively depressing film. It is a film about the Holocaust, but just like 2015’s Phoenix, the Holocaust is more of a background element which exists to tell the core story.

Son of Saul is the debut film from director László Nemes. For a first time director deciding to tackle such a subject as the Holocaust is a mammoth task by itself. Managing to take a well worn subject that has been represented in cinema many times over and present it in a unique and original way is even more difficult. Nemes skilfully tells his story of a man – Saul (Géza Röhrig) – who is a Hungarian Jewish man who ‘works’ in a concentration camp as part of the Kommando group who ‘clean up’ the gas chambers after they’ve been used. We’re presented immediately with Saul guiding a group into the room where they are to remove their clothes before moving into the final chamber which will claim their lives. As he helps clear out the gas chamber, he finds a boy who has survived the chamber. The boy unfortunately does not survive. Saul manages to look at the boy and sees it is his son. From there, Saul attempts to organise a proper burial with a rabbi for his son.

The plot is deceptively simple, and thankfully doesn’t rely solely on the traumatic event of the Holocaust as an emotional crux. Yes, Son of Saul is a story about the Holocaust, but it is also about much more than just that. At its core, this is a film about sticking to your values and honouring what your religion teaches. At many points, Saul is challenged to forgo his attempts to bury his son as he may possibly put other lives at risk, yet honourably (or dishonourably, depending on your reading of the tale) Saul is steadfast in his journey, at times putting his cause before others lives.

At its core this can be seen as an exploration of the challenges that one’s faith throws in your path. As someone who is an atheist, I found this depiction of faith absolutely heartbreaking, but most importantly, exceptionally relatable. This is partly because of the non-preachy tone, as well as due to the core performance by Géza Röhrig who fills the frame in almost every shot.

Part of what makes Son of Saul such a unique Holocaust film is the way it is shot. Cinematographer Mátyás Erdély camera follows Saul in a claustrophobic manner that forces us to see the world of the Concentration Camp from his perspective. The atrocities that occur are often just on the edge of the frame, or even more hauntingly, the cries of people dying in the gas chambers echo in the background via the immersive sound design. Because of this cinematography, some may find themselves slightly distanced from the greater atrocities occurring, but as mentioned, I feel that Son of Saul is more a film about what one man who will do to stay alive through a horrendous situation and to achieve his own goal in this situation rather than being a sole Holocaust drama.

For that reason alone, Son of Saul is a film that I wholeheartedly recommend. It is a devastating film at times, but it is not so oppressively depressing that you will be sitting in stunned silence at the end of the film. The cinematography creates a level of immersion that works as an extension of the story and assists Röhrig’s stunning central performance.