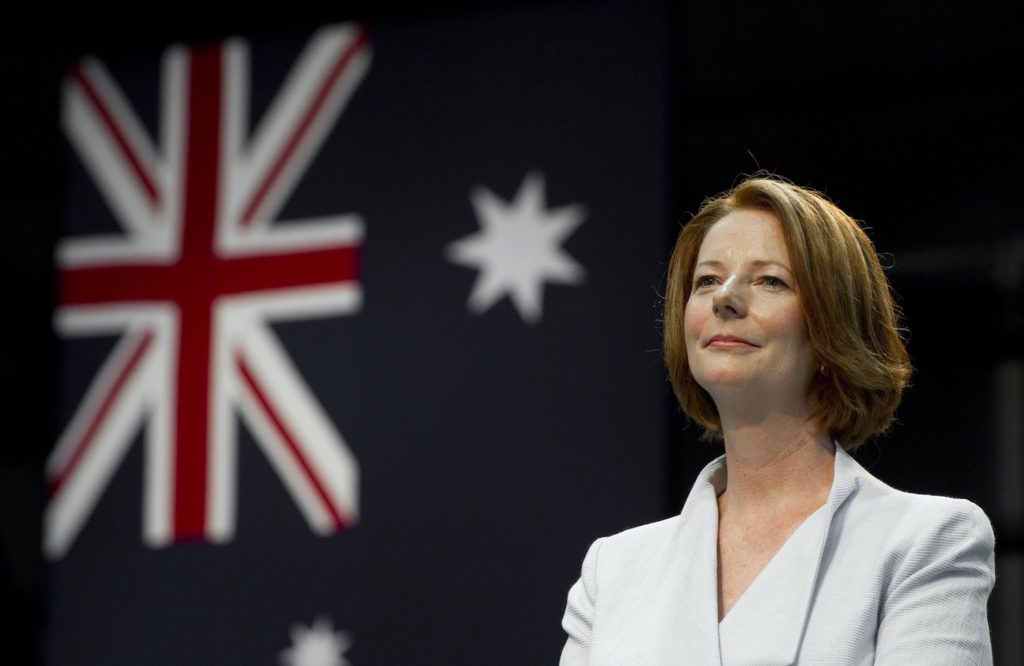 Documentaries are often made in the editing room, where the point of view and directorial intentions are honed, finessed and corralled into the final product that we call a ‘complete movie’. In the case of a film like Strong Female Lead, the narrative intentions are divined and curated from a deep well of archival footage, focusing on the rampant misogyny and toxic masculinity that erupted to the surface of politics, mainstream media, and society as a whole during Australia’s first woman Prime Minister’s, Julia Gillard, tenure.

Following in the monumental impact of the devastating Adam Goodes documentary, The Final Quarter, Strong Female Lead curates Australian history in a manner that throws the words of the lecherous back at them as pointed barbs. Here, the hate filled rhetoric of Alan Jones, Tony Abbott, and the plethora of mouth breathers that thrive on the internet, are left out to dry, with their noxious words lingering like a foul stench in the air. Like Adam Goodes, Julia Gillard is presented here as a gradually weathered person, someone whom a fair proportion of society decided was worthy to have the failings of a country is thrown at, like a vaudeville show and a basket of rotten fruit.

Strong Female Lead is a scathing indictment of Australian politics, arriving at a time when the people’s house is already smouldering from the eternal mulch-fire that has seethed within its walls. Tosca Looby’s direction carries us from Gillard’s entrance into the role of becoming Australia’s first, and still only, female Prime Minister, through her time being pilloried, berated, and abused in Parliament by the leader of the opposition and his equally disturbing followers, to her ejection by ex-Prime Minister Kevin Rudd who sought the role of leader of the country.

The images of future PM Tony Abbott, future speaker of the house, Bronwyn Bishop, former MP Sophie Mirabella, and other notable Liberal Party figures, standing on the grounds of Parliament House with repulsive and offensive signs about the leader of the country, linger throughout the film, with the realisation that what should have been a career-ending moment for Abbott instead turned into a firestarter for the country, further stoking rampant misogyny on the airwaves, in the newspapers, and in Parliament itself.

These kinds of moments are aplenty, and in a creative choice that stands Strong Female Lead apart from The Final Quarter, a choral chime of phrases plays in the background, amplifying the Grecian level tragedy and operatic notion of politics as a whole. As the main stage footage plays out the loud and furious drama that stirs the anger within us all, the chorus erupts with chants of ‘big arse’ and ‘first female PM’, with the impact of the words (both negative and positive) lingering in your mind throughout the film. It’s a creative choice that may either distance the viewer, or further draw them in to the tragedy of the piece.

As a destruction of the toxic masculinity and misogyny that thrived during Gillard’s run as Prime Minister, Strong Female Lead does stray a little too close to lionising and celebrating Gillard as a leader. She is, like all other world leaders, fallible, with broken politics and harmful ideology that further lead to the Australian Labor Party being indistinguishable from the Liberal/National coalition. But, as is clearly depicted here, the impact of Gillard’s decisions about asylum seekers is overshadowed by the misogyny she suffered through her tenure, to the point where Abbott, arguably one of the most Machiavellian opposition leaders ever, drove the conversation surrounding the price on carbon (which was never a tax), forcing Gillard onto a backfoot that she was never able to recover from.

This continued attack is witnessed time and time again, with a late moment where ex-MP Christopher Pine talks over ex-Labor MP Kate Ellis, particularly striking the point of what misogyny in politics in society looks like. This culminates in one of the most important and enduring moments in Australian political history, Gillard’s significant speech attacking Tony Abbott, with the words ‘I will not be lectured about sexism and misogyny by this man, I will not’ ringing through your mind endlessly. Adding to the absolutely fury about the response to the speech is footage of newsreaders comparing the viral nature of Gillard’s speech to a video of a skate boarding dog getting 20 million views on YouTube, effectively adding to the misogyny of society by comparing the first female PM to a dog.

What possibly stuns the most about Strong Female Lead is how clearly it lays bare the reality of what it means to be a woman working in Australian Parliament. Moment upon moment, with horrifying hate speech being eagerly thrust onto the Australian public, branded as ‘news’, we see a reality that makes it even more unbelievable that the current Prime Minister, Scott Morrison, and his equally noxious cohorts, were left surprised by the level of misogyny in Parliament. If they truly believe this is a surprise, then it’s clear they simply were not paying attention, for it was there all along.

Alongside Annabel Crabb’s series, Ms Represented, on ABC, the continued activism from Grace Tame, and the emerging stories from ex-MP’s, like former federal Liberal member Julia Banks, as well as the work of Senators like Sarah Hanson-Young, Strong Female Lead works in unison with the wealth of material in Australian society right now that is working to expose the foundations of Parliament House for what they are: a ‘Canberra bubble’ where men feel they have the right to act however they please, demean women, and disrespect the Australian public with behaviour that we would condemn our friends and family for.

After multiple requests, I bring you my take on the ICONIC ‘Misogyny ’ speech by Julia Gillard with a #glambot twist. #bosschallenge #quarantine

Time and time again, we see that Federal politics simply does not listen to society as to their desire for women in politics, so much so that it was not a surprise to see Scott Morrison reign triumphant over Julie Bishop, at the time the other most preferred Prime Minister, when Malcolm Turnbull was turfed from his position. The enduring nature of misogyny shows that men will always consider themselves the best person for the job, and as such, will vote for each other to keep in power, as happened in 2018. It’s hard to not walk away from Strong Female Lead feeling that misogyny is not just part of the woodwork of Parliament House, but it is also a core party ethos for the Liberals.

At the close of Strong Female Lead, we see the keen lineage of strong female leads around the world, from Angela Merkel, to Alexandria Ocasio-Cortez, and Jacinda Ardern, figures of great inspiration and hope. It’s worthwhile noting that post politics, Julia Gillard has become a major champion for women leaders around the world, with books like Women and Leadership: Real Lives, Real Lessons being co-written by another great woman leader, Ngozi Okonjo-Iweala, existing to encourage young women to get into politics and enact change around the world for women everywhere. Strong Female Lead is keenly of the moment, with the film closing with Amanda Gorman’s powerful poetry reading at Joe Biden’s inauguration, supporting yet another strong female lead, the first female and first African American and first Asian American Vice President, Kamala Harris.

From Munich to Chopper, These Are Five of the Best Eric Bana Films

While these closing moments are powerful in their own right, they do feel exclusive from the main narrative about Julia Gillard’s time in politics. This doesn’t detract from their presence, but rather highlights the need to close a dark film with an aspect of hope. Julia Gillard will stand as one of the great leaders in Australian political history, and Tosca Looby, alongside producer Karina Holden, and editor Rachel Grierson-Johns, have clearly pulled together a film that honours her legacy and the horrifying slice of misogyny that Gillard and her fellow women MP’s, as well as her colleagues in the Senate, had to suffer through. Powerful, essential viewing.