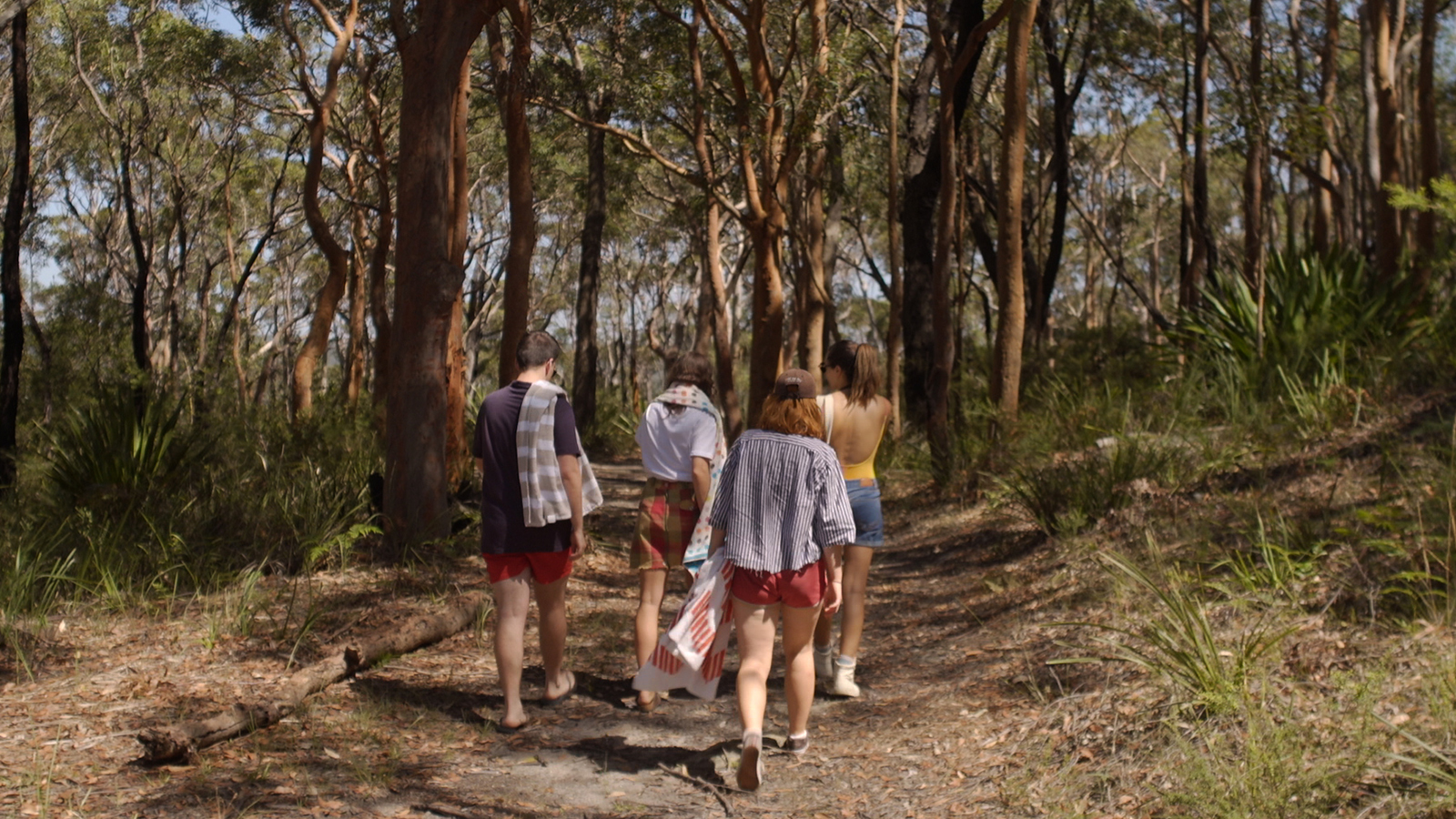 Like a comedian recycling his own jokes, I’m going to riff on the opening of my Hot Mess review as I set the scene for why Suburban Wildlife is a good film. Hot Mess and Chocolate Oyster are the step-aunt and uncle to Imogen McCluskey’s Generation Z focused Suburban Wildlife. Where Lucy Coleman and Steve Jaggi’s films looked at the anxiety driven millennial angst of Sydney-siders trying to get by, Suburban Wildlife thrusts an exhausted group of twenty somethings into the world and watches them attempt to survive.

The plot is more observational than narrative. A group of friends, Nina (Maddy McWilliam), Louise aka ‘Mum’ (Hannah Lehmann), Alice (Priscilla Doueihy), and Kane (Alex King), peer over the precipice into the ravine of adulthood, trying to comprehend what kind of future awaits them going forward. Co-writers Béatrice Barbeau-Scurla and Imogen McCluskey have clearly written from experience, with a script that is full of truths and unspoken stories. On the surface, there is little going on within Suburban Wildlife, but with these central four performances combined, there is a wealth of history that informs their friendships.

Take Hannah Lehmann’s Louise for example. The group affectionately call her ‘Mum’, with her appearing to have once found comfort in being the maternal figure for her friends, but now that the world awaits her future, she finds herself devoid of her own parental figure. In a curious way, there are few adult characters here, given the feeling that these are people who are untethered to the world around them. For Louise, her parents value the life of being grey nomads more than anything else, and have been counting down the minutes til she is ready to leave for London, quite literally pulling the house out from beneath her feet. They are invisible beings, pulling strings and putting up auction signs, virtually pushing Louise to leave so they can be free of her existence, leaving them able to live a life wandering the wild of Australia. All of this exists underneath the surface, rarely being verbalised other than a sudden outburst from Louise – finally feeling able to stand up for herself – that she hates being called ‘Mum’.

In one truly great moment, Louise leaves a party with a man, and on the walk home decides that she’s not interested in going further with him. He protests, but – as every man should when a woman says they’re not interested in sex – he doesn’t follow her. Instead, she’s free to walk home, and in a beautiful scene, leaning up against a poster covered construction fence, Louise takes refuge in the sound of suburbia. It appears, if just for a moment, that maybe she’s at peace with her life and her surroundings.


For Nina, she’s feeling the freedom to explore her sexuality, even if her attempts at flirting involve starring endlessly at girls she likes. She’s awkward when it comes to kissing, and even more awkward when it comes to sex. Maddy McWilliam is powerful in this role, delivering a character who is stretching her own skin, trying to find the comfort in being herself. She’s eternally borrowing clothes from her friends, always trying to be someone she may never be. At one point, as she arrives partly loaded to a party, her friends say she looks like Dame Edna Everage. Alice bows, ignoring the cruel irony of the situation – here she is, a woman, pretending to be a man, pretending to be a woman. We’re through the looking glass and back again.

Alex King’s Kane is a wannabe artist who has no artistic vision. When we meet him, he’s feebly attempting a poke tattoo on his arm. He has a vision of travelling to America and learning how to be a tattoo artist. In his mind, he’s built up a world where he’s needed and desired, where his ‘art’ is worthy and wanted. In one purely devastating scene, Kane shoots hoops on a derelict basketball court by himself. Two strangers appear, their arms and legs adorned in well executed tattoo designs, ball in hand ready to play. Kane stands there, bandage on his arm, blood seeping from beneath its feeble application, looking at their ink and coming to the realisation that he may never be able to be at that level. He drops his ball and walks away, drenched in a lack of self-worth and importance.

The only character in the group that’s lacking in character development and purpose is Priscilla Doueihy’s Alice. This is not to say that Priscilla Doueihy doesn’t impress as Alice (far from it), it’s more that there is less focus on her future, making her narrative thread a bit bare in comparison to everyone else’s. The greatest depth to her is that she’s frustrated with her sometimes boyfriend, always drug dealers lack of attention to the weeds growing out the front of his house. It’s easy to see this as Alice looking to establish romantic roots with him, but there’s little time given to this relationship, making it the weakest of the character arcs.

Suburban Wildlife is peppered with bland conversations, such as one between Louise and Nina, munching on grapes, pondering about the people who make cardboard boxes for moving, to which the only response that can be mustered is ‘I think about this all the time’. This is a generation full of Communication degree laden university graduates, all wondering why their valuable, expensive degree isn’t laminated. It’s another grand irony: in the age of the communication, there should ideally be a need for expert ‘communicators’, but that is far from the truth. What use is a communications degree if all that is communicated is mundane drivel?

Given the internationally perceived cultural hotbed that is Sydney, Australia, it makes sense that it has become the city for these hyper-low budget films about the difficulties of life to flourish. In harmony, Chocolate Oyster, Hot Mess, and Suburban Wildlife appear to reconfigure and reconstruct the perception of Sydney – it being a glamorous tourist destination with a regularly questionable placement on ‘worlds most liveable cities’ lists. While there is a perceived aspect of privilege for those who live in suburban Sydney, it’s misplaced and misguided. As Suburban Wildlife shows, these young adults had once grown up in upper-middle class families, and now due to no fault of their own, they find themselves thrust into a world of lower-middle class struggles.

Maybe this is a new wave of Australian film – the Sydney millennial angst genre. Suburban Wildlife skews much younger than its flatmates, and as such, the anxiety and stress is gone, and with it, the allusion of apathy has dissolved as well. All that remains is nothing. The specificity of Sydney angst is real, and the push of these films to explore the suburbs of Sydney is palpable. Long considered the night life capital of Australia, Sydney has lost its ambience and vibrancy due to the lockout laws, forcing once extravagant night club hosted parties to become back alley shindigs. Venues of joy and openness have been shuttered, and the bass heavy backyard raves rule the night. For Nina, that means that the comfort of attending a LGBTIQ+ friendly bar is out of the question, and instead, she has to rely on her less attuned social awareness which is bolstered by casual drug use. An eccy here, some weed there. It’s all ok, just as long as you’ve bought your drugs from an ok bloke. This is the only way they can enjoy life now. The only way they can eke away their existence. They don’t want to die, but they sure as shit don’t want to participate in life either.

But, rest assured, these aren’t pitiful creatures. They do have hope. They do have aspirations. They do have dreams. They’re just dulled and muted by the world around them. In one of the many ‘staring out the window of a moving car’ scenes that pad the runtime, we see the effects of the controversial Westconnex project – a massive road through suburbia, intended to reduce travel time, all the while furthering a cultural and social divide in an already divided city.


Through all of this, there is a beautiful representation of friendship, with the bond between the four friends being strong and occasionally joyous. A tinge of sadness colours this joy, with a hint that now that the ‘education’ part of their lives over, they will never be the same again. Béatrice and Imogen are wise enough to not write a Stand By Me-esque denouement explaining where these characters end up, instead allowing us to pull on our own life experiences with friends that have moved on, and bonds that have faded, making us realise that these relationships aren’t always forever, but the memories stay strong. In one moment, the four friends share the joy over rediscovering Bubble-o-Bill’s. As they devour the childhood sweet, they lament that they’re not as good as they remember them being. One can’t help but wonder, is anything as good as we remember it being? This dalliance in nostalgia is a reminder to these characters of the inevitable changes that they face as they grow up.

In some realm, this is sub-Gummo kind of stuff. There’s a sly nod to that grime-fest via a tattoo, and while one may think there’d be a desire to be gritty with a story about wayward drug taking adults, the truth is, these characters are too tired, too bored, too whatever dude, for grittiness. Where Bugs dug into the pathetic anger of teenage youth, Suburban Wildlife looks at the middle class twenty somethings who are being pushed out of their parents homes because the grey nomad lifestyle has beckoned them to the wild of Australia. They’re a pack of communications degree laden university graduates with nothing to say and nobody to say it to. They’re skater boi posers who have never skated before, they’re lesbians who have never kissed a girl before, they’re artists who have never drawn a picture before, they’re mums who have never been a parent to anyone before, these are people who give themselves labels because it feels like the right thing to do. Because to be labelled is to have a purpose. To be something is to be someone. Where’s the impetus to grow up when they can clearly see the monotony and drudgery that awaits them? Adult life is responsibility, and responsibility is not fun.

Suburban Wildlife is low-fi storytelling delivered by knowing storytellers. Nina, Louise, Alice, and Kane, are inhabited characters who are real and lived in. They exist outside of the screen, they walk amongst us. The fact that directors like Imogen McCluskey, Lucy Coleman, and Steve Jaggi, are pushing these stories out on miniscule budgets, under $4000 here, a crowdfunded $3000 there, and creating such vivid portraits of suburban life, is impressive. There’s a minor revolution occurring in the world of hyper-independent Australian cinema, and it’s taking place in the suburbs of Sydney at the hands of filmmakers with a few bucks to their name. Keep an eye on this world, there is great stuff coming. 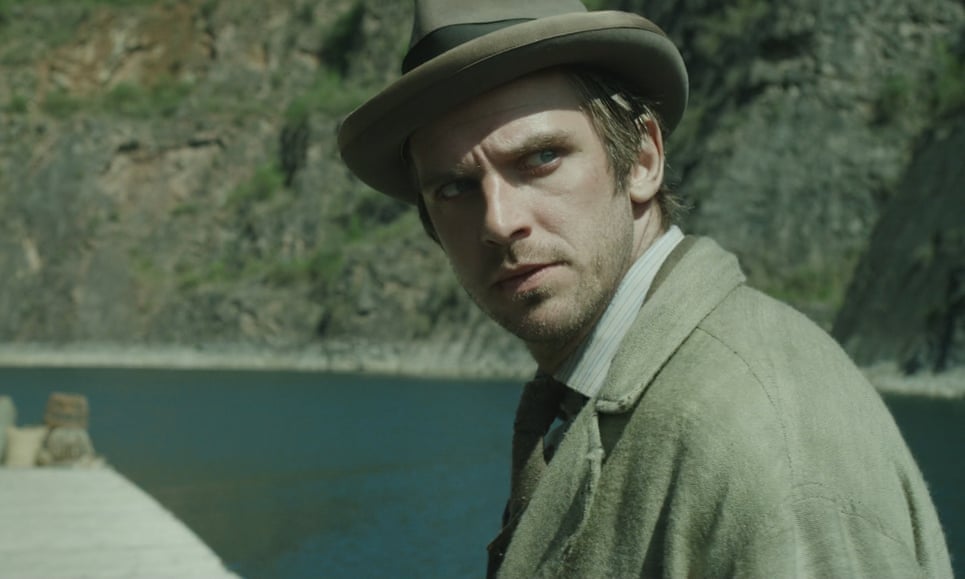