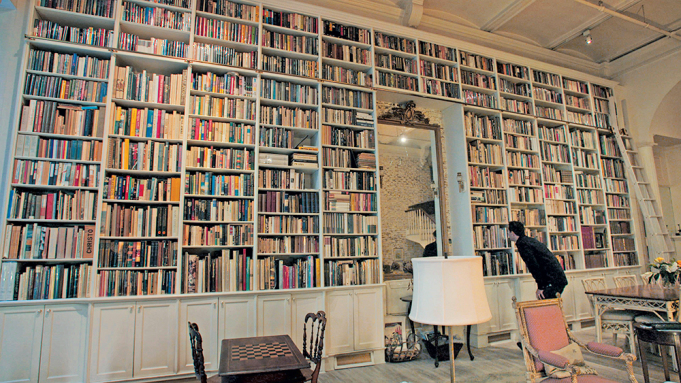 Way back when, there was a book store in North Perth that, upon entry, felt like collapsing into a world of paper, dust, and leather. Books Etc contained shelves upon shelves of books, each one buckling under the weight of the collections of words, and being propped up by the free standing piles of precarious tomes that made a labyrinthine path through the store. Above the front door a haphazard and seemingly hastily written sign hung from the ceiling announcing that books without GST written in their front page would get 10% added onto the final price.

The sign carried an air of irritation, as if the aged owner had his busied existence disturbed by the arrival of the goods and services tax in 2000, and held a grudge for the additional maths he had to do ever since. Each visit to the store had you inevitably leaving with a stack of books heavier than your hands could hold, and each payment came with an equal air of irritation from the owner, safely confined behind a wall of yellowing books that acted more like a defence mechanism than an element of endearment. A NO EFTPOS sign sat propped up on the counter, even though the presence of money appeared to frustrate more than entice him.

Books Etc no longer exists, its mammoth library of books ferried off to opportunistic buyers, debt recovery groups, and possibly worse fates. The building had become weathered and worn with age due to the ancient stories and books within its walls, each one rapidly encouraging a degradation of the floors due to the weight of their words, and as such, was demolished soon after the tenant departed. In its place, a weed filled void stands between two tall buildings, a seemingly impermanent reminder of the ghost that once filled its space.

I don’t know what happened to the owner of Books Etc, a man who the longest discussion I had with was venturing on a unique exploration of the differences between the novel and the film of The Way We Were – neither of which I had engaged with -, but the documentary The Booksellers brought back a flood of memories of his fabled institution and made me thankful that he ever existed.

Directed by D.W. Young, The Booksellers takes an intimate look at the history of book sellers and collectors, albeit with a heavy New York City slant. With a wealth of interviews, and the opportunity to film at the 2017 New York International Antiquarian Book Fair, a grand establishment that has opportunistic sellers pushing weathered tomes onto buyers for the mere cost of a home loan deposit, this documentary engages with the notion of collectability and what it means to be an active collector in todays day and age. It’s then apt that an ancient clock hangs large over the fair, stuck on an impossible time, with the hands facing 4 and 6, suggesting a frozen moment where the old is new, and the new never becomes old.

An array of voices litter the film, with a variety of book sellers who have had intergenerational ties to the selling scene, or those who have fallen into the act of collecting books (amongst other oddities), all talking about their path to collecting, and what it means to be a collectors. A subtle irony takes place here, with the title of the film being mildly subverted by its narrative occupants, as each one opines about the importance of retaining a library of books, of surrounding ones self with texts that allow the transportation to other times and worlds, we’re reminded that this is more about the art of collecting, rather than the act of selling.

And, when one comes to sell a book, they do so with an almost unspoken proviso that the funds it provides will merely feed into the ability to buy more books. Sure, it’s a circular economy in ways, but it exists to help keep the book collecting scene alive, encouraging old collectors to instil the importance and vital nature of their chosen vocation to the smaller, but essential, generation of new collectors.

Unfortunately, even though The Booksellers runs through its packed 99-minute run time with great fervour, eager to touch every aspect of the collecting community, it is both equally precise, and yet too broad in scope. Each topic is given a moment to shine, but ever so briefly. It’s immediately clear that D.W. Young wants to explore this story at length, caring about his subjects and the world he’s exploring, making me wish that this were a six-part Netflix series rather than a film.

Take the Maurice Sendak and Chairman Mao collectors who have an array of Sendak originals opposite an extensive collection of Chinese propaganda. Or the Black artist collecting Black history as essayed in long extinct magazines and newspapers, showing the importance of Biggy Smalls in NYC. Or young collector, Rebecca Romney, who finds a path to engaging with new collectors via the ‘reality’ show Pawn Stars. All fascinating people who have a lifetime of stories to tell.


We’re given mere moments with these expressive characters, and just as we’re getting to know about them, we’re off to someone else who will be given equally limited screen time. Young does wish to highlight the highly gendered and white realm of collecting, with old, white, men making up the institution for so long, and by doing so, he reminds viewers of the need and the push for diversity in the collecting community. As with much of the content within the film, the feeling of this being like a rushed tour guide motioning to each exhibit and throwing out a short paragraph, is unavoidable.

It’s the nature of the documentary format, and Young clearly knows that he’s painting a grand canvas rather than a small portrait, and treats The Booksellers as such, whirling you away on an entertaining, joyous, and occasionally heartwarming film. (It’s impossible not to smile whenever Fran Lebovitz appears, so enthusiastic and so engaging – a genuine treat of a person to watch and listen to.)

This is a slight criticism that can be applied to many modern documentaries. With the ever-growing breadth of Netflix documentaries that have a budget that allows them to run for miles, with niche subjects being given lavish runtimes, the pressure to be accessible, entertaining, and yet deeply informative, is one that documentarians must grapple with. The Booksellers is an exceptional film, entertaining and thought provoking, and I hate that I’m criticising it for not being enough, even though I left the film feeling full and informed, given a myriad of rabbit holes that I want to dive into and explore, but such is the nature of modern documentaries: we want to sit down and have the film do the work for us. We crave a format that thrusts too much information at us, while also allowing that information time to breath and sink into our minds.

We have become spoilt with choices and quality, making a film that doesn’t quite reach the pinnacle of success feel like a failure.

I want to stress, The Booksellers is an absolute delight, a treasure trove of stacked aisles that provide endless opportunities. For those who aren’t into the realm of book collecting, or collecting in general, this film helps inform why the tangible and tactile aspects of a book create such a warm, dopamine-esque feeling for collectors. And that aspect alone is reason enough to spend time in this world.

While maybe not the finest of the finest, this is still a wonderful film that will have you rushing off to your local bookseller to pick up your latest tchotchke for your home library. Make sure to stick around for an utterly delightful post-credits scene that plays like the perfect aperitif to a nice meal.

I certainly wish that I could have visited Books Etc. again after the screening, maybe just to tell the owner about his fellow book selling brethren being presented on screen. I expect I’d have received a grunt or an off handed quip, all the while grumbling about that extra 10% cost to the book in my hand. But, instead, in the shadow of Books. Etc, now having made way for the new, is the inclusive and supportive book store Rabble Books in Maylands – a gender diverse book store that has Drag Queen story hours and hosts discussions with great minds like Yassmin Abdel-Magied and Clementine Ford.

If there’s one thing I can thank The Booksellers for, it’s the reminder that the institution of bookstores around the world is one of the most vital, important avenues to culture that we can have. The faces behind the counter may change with the times, and the stories on the shelves might adjust too, but the importance of the printed word, and the value – both monetary and otherwise – of the text will never, ever fade. A book can bring down a government, or open the mind to a whole new world, it is a very treasured thing that defines who we are as humans. That can never be replaced.