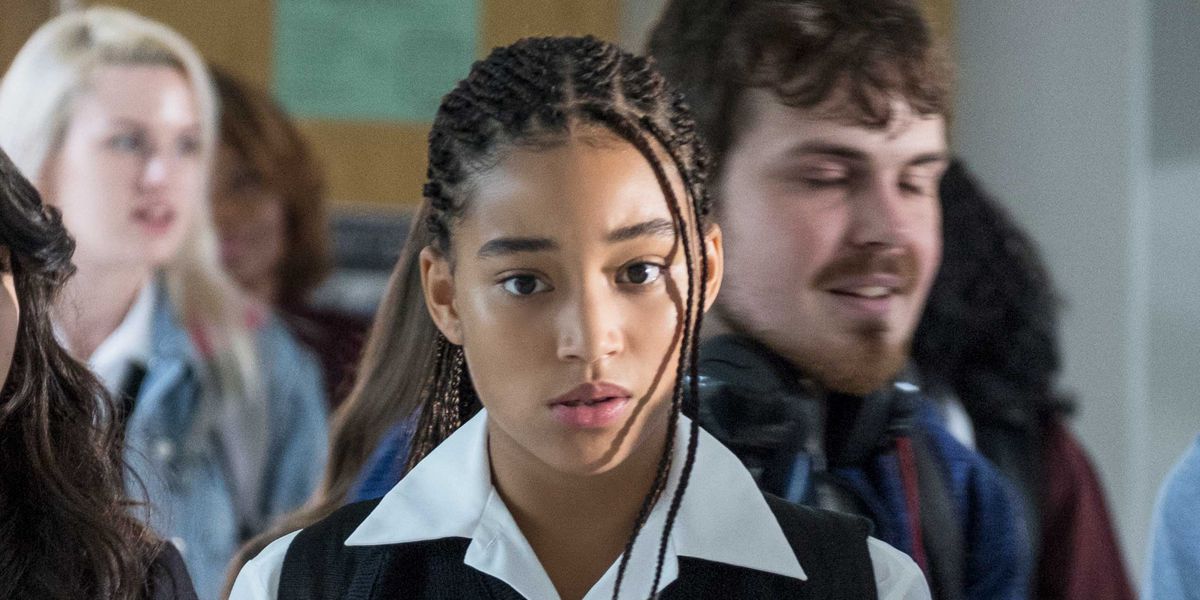 The Hate U Give Review

I first came to The Hate U Give via the simply superb audiobook as read by Bahni Turpin. Her embodiment of the narrator, sixteen year old Starr Carter, was perfect, allowing the book to feel like it was a narrated diary, a glimpse into the life of a young black girl growing up in modern America. For the film adaptation of Angie Thomas’ book, the role of Starr is played by the stunning Amandla Stenberg.

Where Boots Riley’s acidic dark comedy, Sorry to Bother You, looked at the way black Americans have to embrace whiteness to be successful, The Hate U Give supplants a similar narrative onto a more reality-bound setting, with Starr having to suppress her black self as she attends an affluent predominantly white school. Balancing school life and home life is difficult enough for a teenager, but it’s even more difficult when the world they live in works against them, with systemic racism adding fuel to the toxic racial stereotype fire. So, at school, Starr acts as white as she can be, all the while having to see her classmates and white boyfriend co-opt black culture with all the ignorance of white people thinking they’re doing nothing wrong.

At home, Starr can let her hair down and embrace her true self. She can use slang that would otherwise distance her white friends. She can attend a party with a house full of black friends, and she can be herself. It’s at a party where she meets up with her childhood friend, Khalil (Algee Smith), and in the beat of the music, the two are able to bond. That is, until a gunshot rings through the house and everybody flees. Khalil guides Starr into his car, taking her to safety. After reaching a safe distance, Khalil is pulled over by police, and after a brief altercation, is shot dead by a white police officer. Suddenly, the two worlds that Starr has tried to keep separate collide in a horrific way.

Where Angie Thomas’ book managed to put you in the shoes of Starr and thoroughly empathise with her life, writer Audrey Wells has adapted the text perfectly, giving Amandla Stenberg the exact material she needs to help bring the reluctant activist Starr to life. Outside of The Hunger Games, I’m mostly unfamiliar with Stenberg’s work, but if The Hate U Give is any indication, she is most certainly a star on the rise, as she effortlessly gives one of the finest performances by a young actor in recent memory. This may be due to the close correlation that Stenberg has to Starr, with Amandla being quite outspoken about her political views, and in turn, challenging the world that she lives in.

Stenberg has been vocal about the effects of cultural appropriation, an issue which many of culprits have shrugged off as harmless, but as The Hate U Give goes to great lengths to show, can leave those whose culture is being appropriated feeling like they’re floating through life without a tether. White people use black slang and make themselves feel comfortable with black culture, but as soon as black culture pushes back against this, they cry foul and get upset.

The book and the film take their titles from the Tupac Shakur song THUG LIFE – a title that breaks down to be ‘The Hate U Give Little Infants Fucks Everyone’. Taking that concept, and distilling it to its pure essence (as in, what happens to the youth of the world when the world is full of hate), The Hate U Give applies it to a logical narrative that follows through of what happens after a police shooting occurs and another black person has their life taken. Director George Tillman Jr. manages to masterfully weave in other issues facing black America. Is Starr’s white boyfriend just dating her because she’s black, and not because she’s Starr? Are Starr’s white friends simply keeping her around just so they can feel better about themselves using black slang? What happens when a black police officer is presented with the horrific issue of one of his white colleagues having killed a black man? What happens when someone reluctantly becomes a major figure for a protest movement just because their friend died?

But, this is Amandla Stenberg’s show and she deserves every accolade she gets for being able to carry this deep film about racism in America. There is a lot more to explore within the film, and sure, I’m only skimming the surface of what is being touched on here, but the key thing is, you should go and see The Hate U Give. Take your friends and family and go out afterward to discuss it, because damn, this one needs to be shared far and wide.

The Hate U Give is a vital film that’s powerful, exciting, moving, and is easily one of the best films of the year.