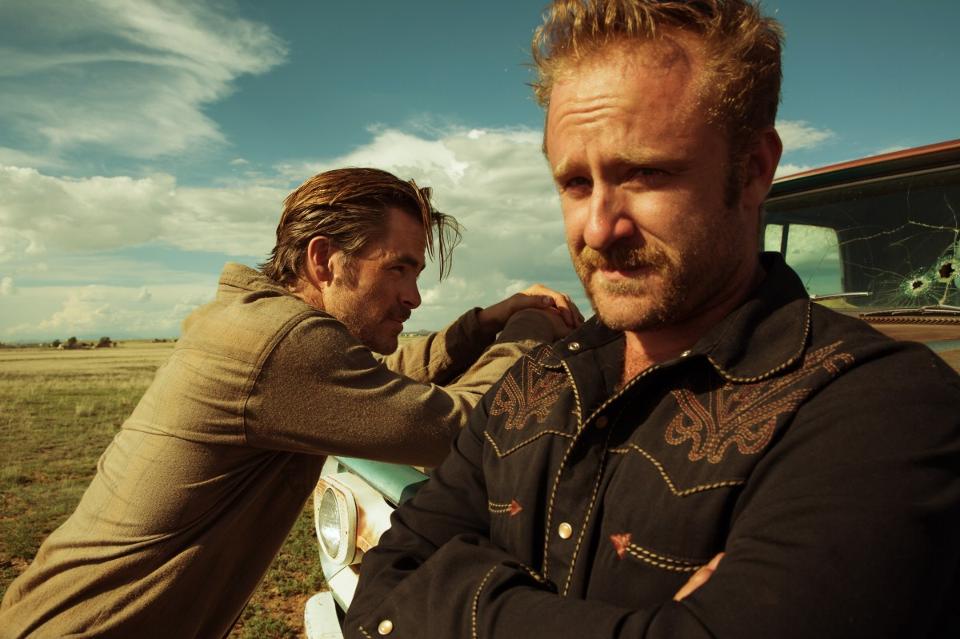 One of the great things about the dark periods of society is that it can encourage great art to be created. Art that comments and reflects on the society it is created within. Films like The Hurt Locker or There Will Be Blood effectively comment on the state of America, and while they are timeless films, the era that they were created within elevates them even higher. David Mackenzie’s Hell or High Water is a solid film that is elevated due to the current economic climate that it was created within.

Written by Taylor Sheridan (whose Sicario presented a different aspect of the criminal world in Texas), Hell or High Water focuses on brothers Toby and Tanner Howard (Chris Pine and Ben Foster respectively) as they methodically work through robbing West Texas banks, gradually building a stockpile of cash. Expectedly, the law jumps on their trail – namely, soon-to-be-retired Marcus Hamilton (the always great Jeff Bridges) and his partner Alberto Parker (Gil Birmingham). Unlike many ‘bank robber’ tales, the Howard brothers have a well-considered, logical plan in place to ensure that they reach their necessary cash point and ideally avoid capture.

Like the Coen Brothers No Country for Old Men or Sicario, the image of Texas is presented as a sea of nothingness. The vast empty fields that line the horizon are periodically peppered with oil wells that endlessly mine the earth for the black gold. Jobs are seemingly non-existent with the only viable careers being that of a waitress or a bank teller, or sitting in a diner, nursing a coffee all day long. Debt relief billboards have surpassed regular advertising. Not so subtly, we’re shown the controlling nature of the banks, and understandably are given a reason to sympathise and encourage the behaviour of the Howard brothers.

Chris Pine leads the film here – expertly delivering a powerful triple hander with Foster and Bridges (Birmingham is also solid). Combined with Z for Zachariah, Pine is starting to deliver some truly wonderful and transformative performances, cementing himself as an actor to watch. Foster has consistently been a great actor who has rarely been given the credit he deserves. As second fiddle to Toby, Foster’s Tanner is a man who understands his path in life and what he needs to do to redeem himself. He works as a great counter point to the stoic Toby.

Jeff Bridges delivers another stunning performance – he’s all swagger, and is a purely calculated officer of the law with his years of service to inform his investigating. His retiring Hamilton is casually racist, yet considers the slurs he throws at his partner as a form of affection – willingly ignoring the harm the insults may have on his partner; commenting that Parker will miss them when he’s gone. Gil Birmingham is the straight-man to Bridges exuberant officer. It’d be easy to focus solely on Bridges performance, but the two work so well together and compliment the relationship that Pine and Foster have. From real brothers, to brothers in arms, Hell or High Water is as much about mateship as it is about family.

And yet, here is my main complaint with the film. As superb as the performances are, as taut as the action and tension is, as powerful as the script is – it’s so laden with symbolism and subtext that it drags down the impact of the story for me. Like No Country for Old Men, I could only admire the talent that is displayed here. Too often I found myself overly aware of the subtext that Mackenzie and Sheridan were aiming for. For the most part, the subtext does work, however at times it feels heavily manufactured and constructed. Needless to say, this would make an easy film to write a high school essay on semiotics.

The question then arises – when a film is recognisably great, and excels in the fields that it aims to exceed in, yet doesn’t resonate with you as a viewer, then how do you qualify your assessment, or rating, for that film? For me, Hell or High Water is an impressive film, but I find that I can only admire it from a distance. Where others may love it – as many do with Oscar talks for all involved  – I find myself gravitating towards the (similar in tone) great Goldstone over this film. I do highly recommend viewing Hell or High Water, and odds are you will love it more than I can.