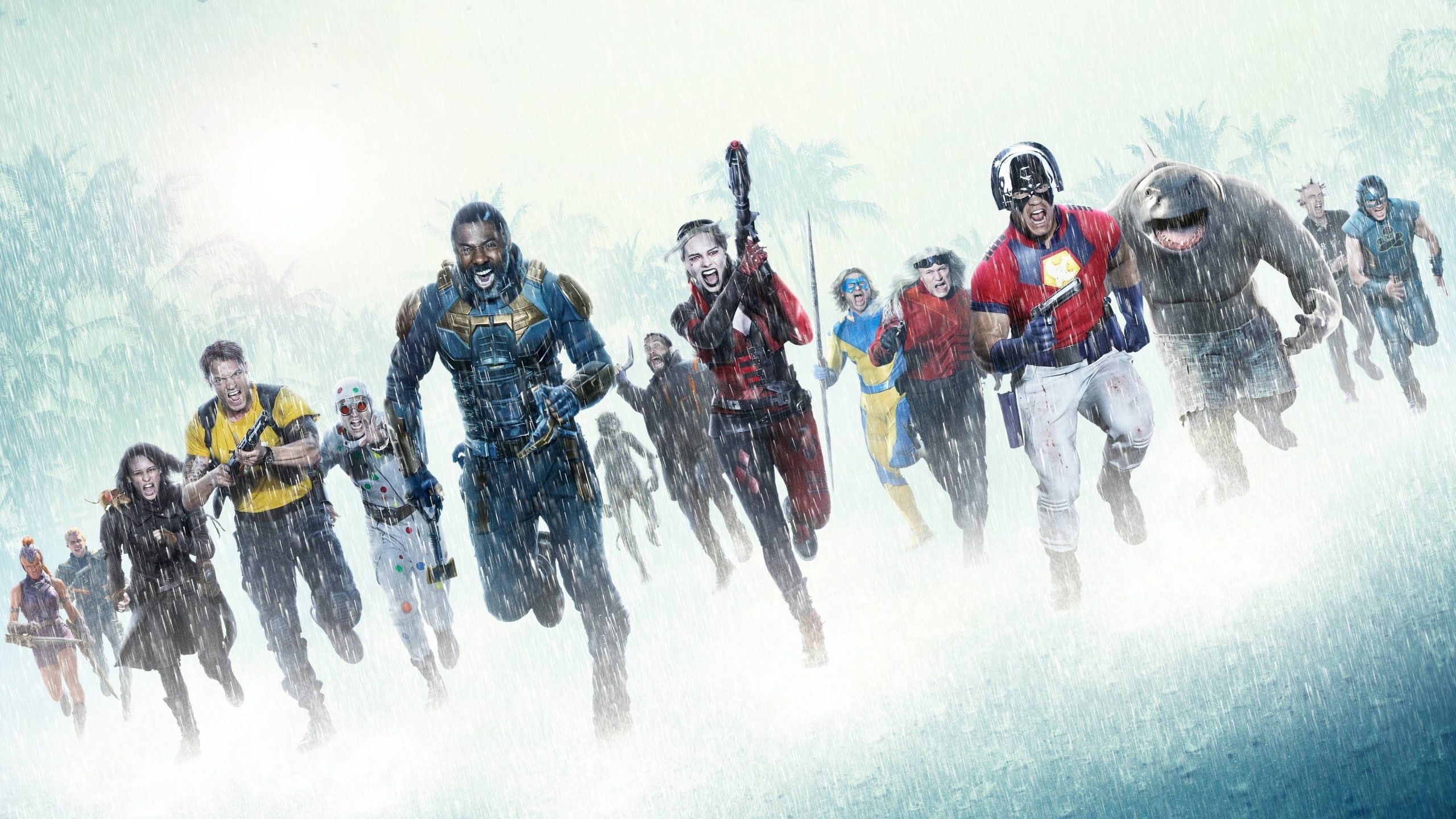 The Suicide Squad review – A Movie So Great, We’ve Reviewed It Twice


To risk sounding like a movie trailer cliché: forget what you think you know about the Suicide Squad.

Forget the entire 2016 movie completely. It’s not worth revisiting or remembering. Despite making $700 million worldwide (thanks mostly to Will Smith, post-Batman v Superman interest in DC, effective trailers, and a popular soundtrack), that movie seems to be regarded as the worst of the current crop of DC movies, even below the pointless theatrical cut of Justice League.

The 2016 Suicide Squad has since been denounced by its writer and director David Ayer as not being his movie and entirely a product of panicked studio interference (a surprise to no-one). Only a handful of characters return for the new movie, Jared Leto’s Joker is seen as the worst interpretation of the character, and his relationship with Harley Quinn (Margot Robbie) was thankfully course-corrected in Cathy Yan’s Birds of Prey last year. We should all move on.

Go into James Gunn’s The Suicide Squad with an open mind, strong stomach, and an anticipation to see something completely fresh for DC.

Once again, Viola Davis’ Amanda Waller has rounded up a team of supervillains and criminals under the codename Task Force X to execute black ops missions for the U.S. government. The missions are impossible and they’re all regarded as expendable.

The movie opens with Michael Rooker’s Savant (going 5 for 5 being in James Gunn movies) as he’s recruited for Waller’s team which seems to consist of the some of the oddest and dumbest comic-book characters you’ve ever seen, led by Joel Kinnaman returning as Colonel Rick Flag. Harley Quinn is along for the ride, and if you think this ragtag group of idiots like Captain Boomerang (a returning Jai Courtenay), T.D.K. (Nathan Fillion), Javelin (Flula Borg), Mongal (Mayling Ng), Blackguard (Pete Davidson), and a 6-foot weasel named Weasel (Sean Gunn in mo-cap) are going to be the heroes of the movie, pay attention to the tagline and “don’t get too attached”.

After the gleefully violent, explosive, and insane opening sequence, it becomes clear who the REAL team is completing this mission. The assassin Bloodsport (Idris Elba), Peacemaker (John Cena), Ratcatcher 2 (Daniela Melchior), Polka-Dot Man (David Dastmalchian), and King Shark (voice of Sylvester Stallone, mo-capped by Steve Agee) are sent by Waller to the South American island of Corto Maltese. The team must find mad scientist Gaius Grieves (Peter Capaldi), infiltrate the ex-Nazi scientific facility Jotunheim, and destroy all evidence of the mysterious Project Starfish. They also have to rescue Rick Flag and Harley Quinn at some point, whilst trying to avoid the powerful military running the country.

As soon as The Suicide Squad starts, you are strapped in to a rollercoaster of lunacy. James Gunn and his cast and crew are taking you on one hell of a ride, no stopping for tedious narration or extensive character intros. It’s one hell of a ride.

This isn’t to say we don’t know who our characters are or why they’re doing what they’re doing. Exposition is one of the most brutally necessary parts of screenwriting, and Gunn makes it interesting. Amanda Waller explains who everyone is directly to Bloodsport or Peacemaker, locking us into the world of these characters and not having it feel like anyone’s close to breaking the fourth wall.

The characterisations and interlocking relationships are also quite cleverly done. One fair criticism of the 2016 movie is that while most of the team were deadly criminals who could handle themselves, Harley Quinn is just thrown in for no good reason other than the character’s popularity. In Birds of Prey, Robbie and the filmmakers wanted to give her the opportunities to really prove herself to the audience and did so with aplomb. In this movie, she’s underestimated by Waller, thrown in with the reject first team, comes through as one of the only survivors, and spends the rest of the movie proving herself better than ever as a ruthless warrior who doesn’t need rescuing. She still appreciates it though. Robbie is better and better with every appearance as this character, shaping herself as one of the finest comic-book castings ever, and her work with Gunn and the stunt team give Harley her finest on-screen moment. Her escape from her captors, timed perfectly to “I Ain’t Got Nobody”, is a gloriously gory and delightfully brutal yet exceptionally fantastical action extravaganza that builds so perfectly on what Cathy Yan and her team built for Harley in Birds of Prey.

But Harley is the veteran in this cast. What about the newcomers?

Idris Elba as Bloodsport shares some base similarities with Will Smith’s Deadshot (perfect-accuracy hitmen wearing cool masks and motivated by daughters), but the differences are what matters. Deadshot’s backstory was patched together with obvious dialogue and a lazy flashback, while Bloodsport develops over the course of the movie into someone you want to root for. How he feels about his daughter (Storm Reid) being manipulated by Amanda Waller, and his lingering trauma at the hands of his own father, which then caused his fear of rats, is played perfectly by Elba. He and John Cena deliver anger, fear, and comedy with incredible versatility, and the resolve to Bloodsport’s issues is a feat of remarkable strength and vulnerability from the actor.

John Cena builds another layer of tremendous quality to his on-screen career, going from direct-to-DVD action movies to delivering on a complex and morally-corrupt character who apparently wants peace but will also “kill any man, woman, or child” he can to get it. Cena is a funny and charismatic person, which helps his character work so well with the humourous scenes, but when the plot thickens and the motivations are clear, he’s a force to be reckoned with. James Gunn has proven twice now that he knows how to take wrestlers and make them great actors, and we should let him continue. Can’t wait for Becky Lynch or Steve Austin to appear in Guardians of the Galaxy Vol. 3.

King Shark is essentially the Groot of this movie. He’s a powerful yet child-like creature of few words and kind eyes you can’t help but fall in love with. David Dastmalchian is playing one of the most ridiculous characters to ever be featured in a comic-book movie, but because of his touching performance and Gunn’s writing, Polka-Dot Man becomes an instant favourite. Daniela Melchior as Ratcatcher 2 is the heart of the film. Having mostly starred in Portuguese films and TV, she’s a relative newcomer, but with an overwhelming emotional depth to her performance, Melchior steals the movie and it’s a beautiful thing to behold. Throwing interdimensional polka-dots at people and controlling rats is cooler than you might think.

Viola Davis has less to do than in the 2016 movie but feels more terrifying and real in this one. I don’t care that she probably did most of her scenes in a week because Davis has become a note-perfect realisation of the cold and despicable Amanda Waller from the comics. The simplest dulling of her eyelids and slow-turn of the head, she’s a true terror.

What was truly the most surprising aspect of The Suicide Squad was how much you grow to care for Rick Flag. Kinnaman’s character just a guy with a gun, completely pointless and forgettable. But James Gunn unlocks Rick Flag as the Captain America of the team: simplistic on the surface, but is the only one with a true heart of a hero. He does the right thing, even if it means betraying orders. The character’s big moment in the movie broke my heart. He has the biggest and best improvement out of everyone and I’m incredibly thankful for his change.

If it feels like I’m too positive on this movie, know that it comes from a place of total honesty. I loved The Suicide Squad. James Gunn brings his unique sense of humour and works so beautifully with the MA15+ rating, giving you all the blood and profanity of a Deadpool movie, but with an inviting and resonant emotional quality. You grow to deeply care for these characters the same way you did for the Guardians of the Galaxy. They may seem to be the dumbest and most laughable comic-book characters, but you should not underestimate how Gunn can craft them into real and relatable people.

The Suicide Squad is also a cinematic feast. Guardians of the Galaxy Vol. 2 cinematographer Henry Braham shoots the film with a full-frame aspect ratio on IMAX cameras, with vibrant colour timing being another continuation from Cathy Yan’s work on Birds of Prey. You’re delighted to a focus and propulsion of the form, always a sight to behold, and every sequence identified by a fun title appearing in some random place.

When you have a James Gunn movie, you can expect it to mostly be a comedy. He has evolved to be a more emotionally-driven director, relying less on what’s funny and what’s best for the story. This is still an incredibly funny film with plenty of unbelievable and side-splitting moments that you won’t see coming. However, as it happens with most comedies, maybe everything isn’t to your taste. Comedy is quickest to hit but fastest to age.

The movie is still able to be about something, other than just being crazy, violent, and comedic. Themes of parental relationships that drives Bloodsport, Polka-Dot Man and Ratcatcher 2, trauma and abuse that defines Harley’s journey, a criticism of US foreign policy (even in a fictional sense), the destruction of things we do not understand, and how even the most degraded and despised creatures can still have purpose are all there to be found. Perhaps not everyone will resonate with these messages, but they are intentional and can be quite meaningful.

With excellent performances, electrifying action sequences, some beautiful writing, a few killer song choices, and marvellous direction, as well as a 100-foot telepathic alien starfish, The Suicide Squad delivers things nobody would ever think possible in a comic-book film. It grows on you and becomes one of the most profoundly enjoyable and refreshingly creative works in the sub-genre. In the words of Nathan Fillion’s Malcolm Reynolds from Firefly, they have done the impossible and it makes them mighty.

Writer: James Gunn (based on characters from DC Comics)