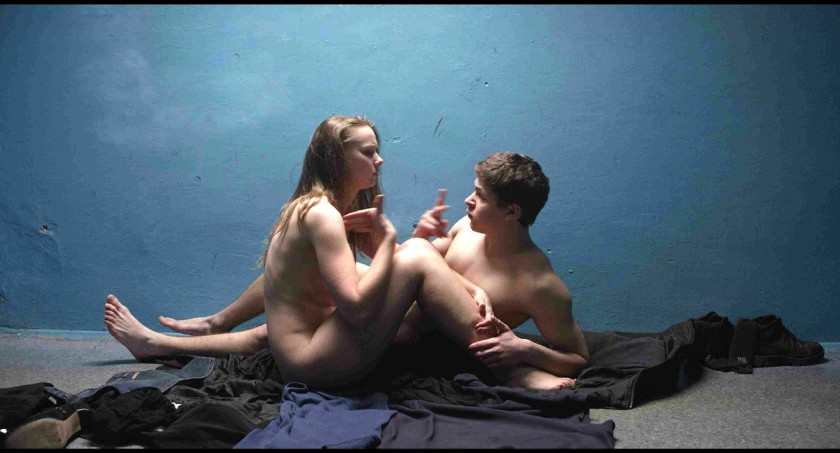 
You’ve most likely heard a lot about The Tribe – the worldwide festival favourite that has been scooping up rave reviews and awards around the place. Set in the Ukraine, The Tribe follows a young man who finds himself at a boarding school for the deaf. Filmed with no subtitles, no audible dialogue and no voice over, The Tribe presents the world of these deaf students as it is.

I went into the film not knowing anything of the plot – just that basic premise and that it would astound you. Well, The Tribe managed to do just that.

The Tribe displays some truly superb cinematography with a great mixture of static shots as well as creeping tracking shots. There’s something oddly perverse about the camera stalking these students as they make their nightly escape into the surrounding suburbs to prostitute two of the female students out to truck drivers. Then there’s the people they rob and beat up in the night as well – we silently watch as they silent enact their crimes. This is the harsh world of the deaf youth in Ukraine and this is how they manage to get by.

This perverse and uncomfortable aspect is further developed when one of the nameless characters suddenly is killed whilst lighting a cigarette. The Tribe goes to great levels to reinforce what the silent world is like for these students. For the viewer however, we are eased into this world with scenes of our main protagonist asking for directions to the school, arriving at the school as the viewer silently observes him silent observing other students. We are given the ability to settle into the movement of the film prior to it launching into some of the most devastating and difficult cinema viewing I’ve seen since Dancer in the Dark.

There’s no doubt about it – this is challenging cinema. It presents a world that’s unfamiliar to the majority of viewers and asks you to observe. It asks you to observe as some truly difficult scenes unfold – from an extended abortion sequence that escalates to a silent cry, to some of the most impactful violence I’ve ever witnessed in a film.

It makes you ask whether these scenes are challenging because we as the viewer are unable to fully understand character motivations because the way they communicate is hard for us to understand? As with Mad Max: Fury Road earlier this year, The Tribe presents cinema with its most primal elements – the reliance on visuals alone. Where Fury Road embodied elements of silent cinema, The Tribe embraces it whole heartedly. In fact, even with the very basic world sounds, I would argue that The Tribe is even more of a love letter to silent cinema than The Artist ever could be. But that is an argument for a different time.

The Tribe is a film which I struggled to sit comfortably watching. The primal elements of the characters here are so perfectly realised that the title is well and truly earned. The two female characters are owned by the group, never given the chance to be free, be themselves. It’s the moments between these two characters when they’re alone together that I most appreciated. When they’re away from the male characters they’re given a chance to almost be themselves, until they’re dragged back into the brutal world they inhabit.

This isn’t a film about gender politics, but there’s simply no denying the impact that the way females are treated in this film. There are some extreme breaking points for viewers here that will definitely make you question whether you’re ok with what’s being displayed here. There is such a grand sense of realism here that it’s hard to detach fact from fiction; almost to the point where you question whether this is actually a really well made documentary.

The Tribe is a film that doesn’t relish in the suffering of the female characters, yet it does border on being depression-porn with characters that constantly work against each other, always pushing each other down and ensuring that no one escapes or succeeds. Whilst I felt uncomfortable to the point where I nearly walked out, I’m reminded constantly by the film that this is not a film that should make you feel comfortable. The actions on screen should not be simply accepted.

Another film I can’t help but compare this to is the Gaspar Noe’s masterpiece Irreversible. A film which has extended sequences that are difficult to watch, that are almost impossible to sit through without questioning if you’re complicit for watching such a film. However, Irreversible tried to make sense of the despair and brutality on display. The Tribe simply displays the brutality and asks you to make your own mind up. The Tribe feels like a natural progression from Irreversible to here for uncomfortable cinema; both sharing long unbroken shots that elevate uneasiness.

Perspective Shift Review – A Joyous Look at the Path to Inclusion

After everything though, I’m glad I saw The Tribe through to its devastating conclusion. It’s a film that elicits emotions we don’t usually get to feel from cinema, and for that alone it should be applauded. I can only really recommend this film if you’re aware what journey you’ll be embarking on.