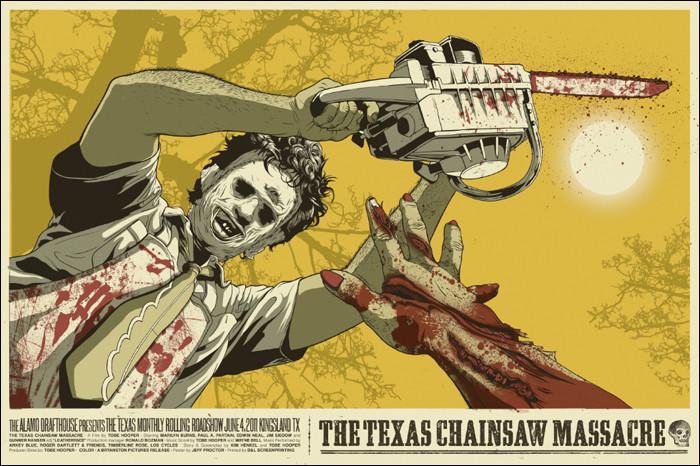 50. The climactic scenes of Steven Spielberg’s best film, Close Encounters of the Third Kind, play out like a grand opera in the sky with the lights of the many UFO’s dancing to the John Williams score. This all takes place next to the backdrop of Devil’s Tower – a place that has somehow managed to be the calling ground for many around America. It’s a visually stunning sequence in a film that’s littered with many of them.

Todd Slater imbues his trademark style into this print superbly. The metallic sheen from the paper helps reinforce the bright variety of lights on the UFO, while also helping differentiate the UFO from the stars that surround it. Even with all the light from the ships, Devils Tower still sits in darkness – an homage to the original poster for the film. The use of glow in the dark ink helps make this print shine like a beacon in the night – so much so that I’ve had to move my framed version out of the bedroom into a place that won’t keep me up at night.

49. Mondo has created a fair amount of Hellboy related art, so it’s only fair that the creator of Hellboy gets to play in the wheelhouse of varied IP’s that Mondo has. It’s then apt that one of the films that Mike Mignola went with was for the gothic classic The Bride of Frankenstein.

The darkness of death and its closeness to love is explored in this superb print. Colour palettes that are familiar to those who read Hellboy appear here, dark crimson, pitch black, and white – all combined for a version of The Bride of Frankenstein that respects the film while recognising the legacy of Whale’s work and the impact that it has had on artists like Mignola and Guillermo del Toro is all captured here.

48. Dario Argento’s Deep Red is a giallo classic that drips with gore and blood in every way that you’d expect an Argento film to do. WeBuyYourKids appear once again, this time with work from their Tina’s Mom’s Boyfriend show in 2012. That show was one of many WeBuyYourKids/Sonny Day shows, and it helped establish the off kilter work that this Australian couple create.

The shades of red on display here is, apologies, deep and varied. David Hemmings scared face stares down an oncoming gloved hand that may or may not be coming to claim his life. The jpg of this print is nice, but the printed version elevates the image to a grander level. If only WBYK could do a whole series of giallo prints. 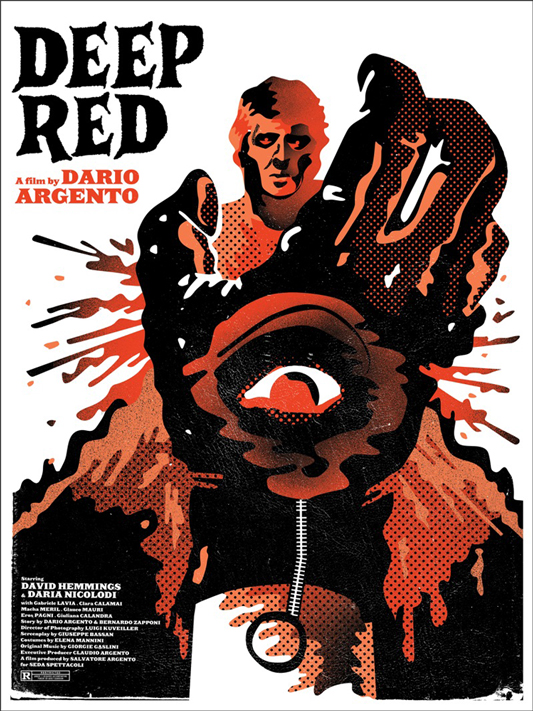 47. Tula Lotay returns with another print that showcases her skills at drawing the female figure. Here, Kristen Stewart wears a risque set of clothing that barely covers her. It is not hers to wear. It’s the celebrity whom she works for.

Personal Shopper is a film that deals with death and grieving, while also dealing with ones identity. The varied colours show Stewart in a sea of thoughts, both admiring herself in this forbidden costume, while also trying to figure out where she is in life as she grapples with grief. This is a powerful print without having seen the film, but after watching the film it takes on a new level.

46. Ken Taylor’s Poltergeist was one of the first Mondo prints that I tried to buy. Well, by ‘tried to buy’, I mean I saw it pop up on the site and, given this was back in 2010, I figured the print was going to still be available by morning. I was wrong of course.

It sold out quickly and this creepy tree and light out of a bedroom window has eluded me ever since. Ken’s work has had a repeated motif of trees and impending doom – his horror prints have been some of the finest out there. Poltergeist has a wealth of imagery to pull from, so for Ken to use a tree and a house is impressively audacious, but no less haunting. Eerie, unsettling and one that maybe I’m lucky isn’t hanging in my house as no doubt it’d scare me witless in the middle of the night.

45. Where João Ruas explored the fractured nature of war within The Thin Red Line, Toner Hanuka presents the exhaustive, tiring aspects of war. Within Malick’s film, war is something that happens while bureaucracy and boredom take a break. The tiring chains of command just to take one hill become exhaustive.

As a war that’s been raging for years and claimed millions of lives, World War II can only have felt tiring and have left soldiers questioning the depth of depravity that the human soul could reach down to. This contemplative moment of a man cleansing himself, washing himself of his sins while also refreshing him, making him anew, is powerful.

44. Tyler Stout’s style, as mentioned before, is often perceived as organised chaos. Well placed figures tell a story and suggest what narrative the film may follow. When Ken Taylor and Tyler Stout paired together to do a joint show, there was bound to be unique, different takes on their signature styles displayed.

So when Stout unveiled a print for Jacques Audiard’s prison film Un Prophete, it was jaw droppingly different from his regular ‘floating faces’ output. Tahar Rahim’s face looms large over the prison where he remains and his story plays out. Stout utilises the sparse ground of the yard to embody the emptiness of Rahim’s Malik’s life. It you haven’t seen Audiard’s film, then seek it out.

43. Outside of Mondo, the name Shepard Fairey is one of the largest in the art world. Fairey is the mind behind some of the most iconic modern street art – namely, the Obama campaign’s ‘Hope’ posters. One of the logos most closely associated with his name as an artist is the OBEY slogan. For fans of John Carpenter’s sci-fi eighties classic, They Live, this word alone will conjure a bunch of memories of aliens hiding in plain sight – pushing their capitalist agenda onto society.

Of all the licenses that Mondo could get, John Carpenter’s is one of the finest. So, naturally it’s a logical pairing of Fairey and They Live. And it doesn’t disappoint. As time has gone by – and with Trump as President – this frightening portrayal of a disfigured leader demanding their constituents ‘obey your dictator’ has become even more terrifying. As a print for the film, it’s apt and worthy. As a print for a society in peril, it’s even more applicable.

42. In the realm of Mondo prints, there is no more prolific artist than Mike Mitchell. His releases are seemingly endless, and his variety is through the roof. From his personal releases of fighting foods and fat animals, to his Mondo efforts of side profile characters to his Just Like Us series, and much more, it wouldn’t surprise me if Mike Mitchell turned out to be ten small men working day and night within the body of one regular man.

While the artistry of his other work is undeniable, it was fairly easy to be able to select this exceptionally cute Just Like Us entry with best friends 4 lyf Groot and Rocket hugging. With a title that’ll make you squee – Tree Hugger – and the exceptionally cute smiles that Mitchell gives Groot and Rocket, you can’t help but feel a warmth in your heart. Everything about this is designed to make you smile – as much of Mitchell’s work does. Mondo eventually moved into the world of toys, and in 2017 decided to release a full size version of this lovely print. Cuteness in a print is always welcome, but tangible cuteness is even better.

41. Jeff Proctor’s back with his impressive level of detail to gore and terror with this chilling Texas Chainsaw Massacre print. Leatherface looming over his victim, a blank face made up of previous victims. A raging chainsaw in his hands, prepped to reign doom. The victims hand hangs in the air, pleading for their life. The blood dripping down their fingers outlines their waning energy. The sun hangs in the sky, emanating a powerful heat so focused with the perfect choice of colours that you’d be forgiven for thinking it was real. This is the epitome of fear.

Tobe Hooper’s classic film is my third favourite film of all time – and it’s one that after a big screen viewing in 2014, I will not be watching it ever again. It’s simply that terrifying. Proctor works are creations that turn into eternal odes to fear and terror. He’s worked tirelessly to create homages to horror classics, and is a master at conveying the fear that the films he works on evoke. There’s no better piece in his oeuvre than this one. 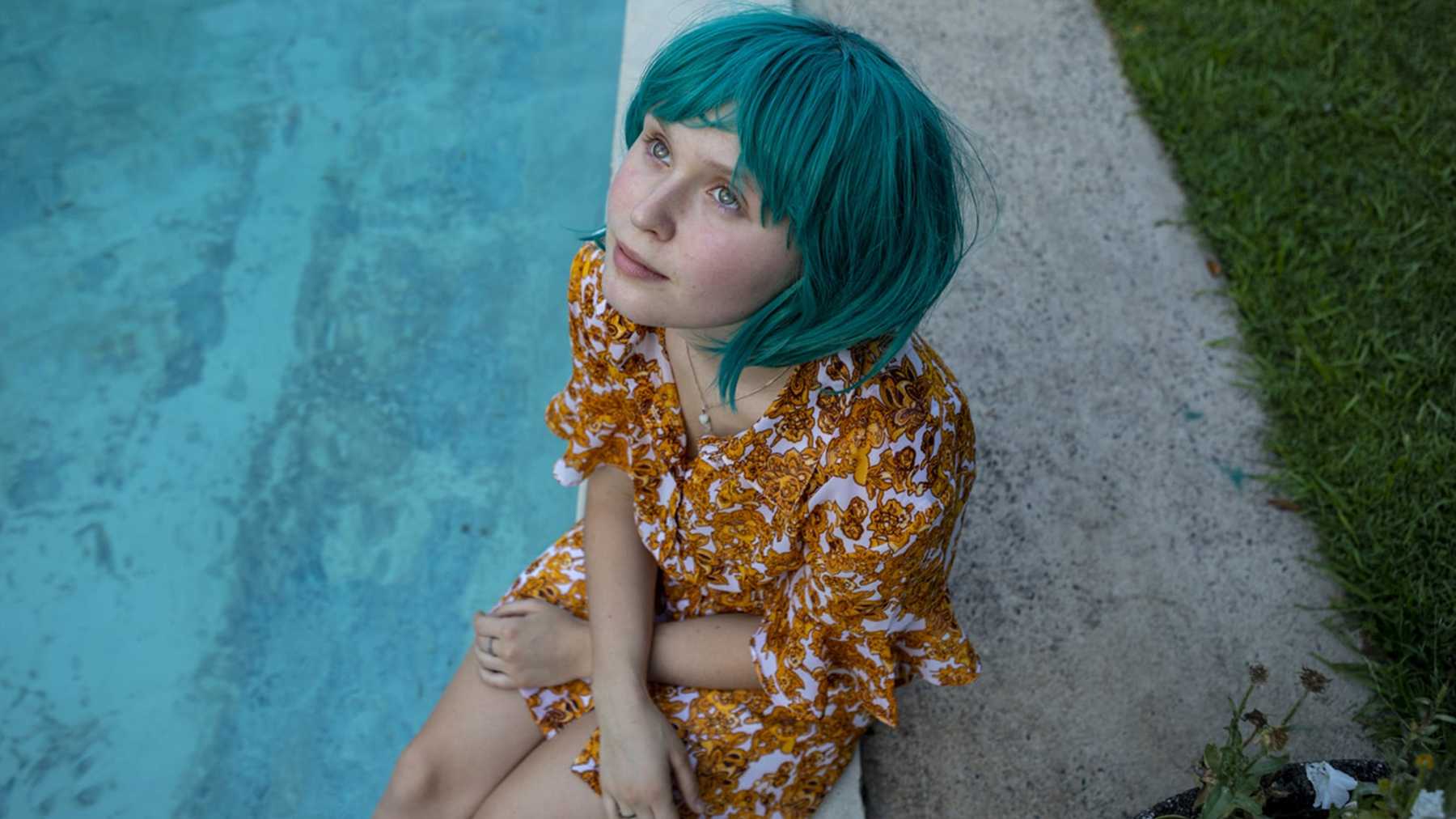