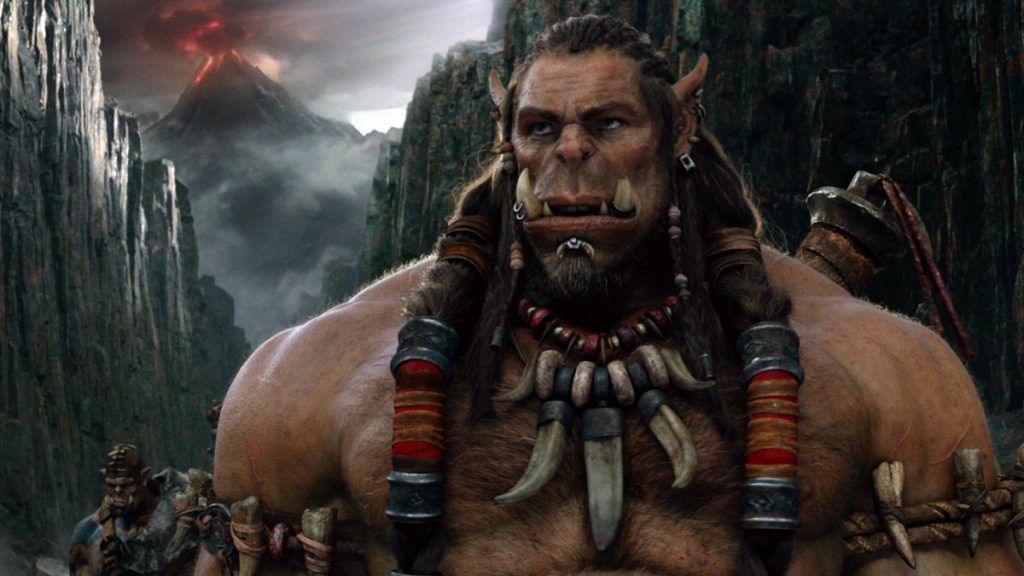 As Meat Loaf once sang, two out three aint bad. Except, maybe, when that third film in your oeuvre happens to be Warcraft. Duncan Jones had a good run, having made the notable sci-fi films Moon and Source Code prior to stepping into the world of fantasy with this epic video game adaptation of the successful MMORPG World of Warcraft.

For those unaware, an MMORPG is a massive multiplayer online role playing game, of which World of Warcraft is considered one of the most popular. While I personally haven’t spent much time in the world – my sole journey into the game was playing a grotesque female orc named Barbara who spent half an hour rounding up pigs – I’m aware that there is a grand lore within the game. Worlds upon worlds interact in all manner of ways – in a recent expansion a world of Panda warriors was introduced to the lore. So, with that in mind, what is the plot of this adaptation?

Well, a race of orcs have decided to flee their lands because it’s dying. To do so, they have to capture other races so they can be sacrificed to create a portal to another land. The land they happen to teleport into – Azeroth – is a one filled with humans (and some very forgettable dwarves). After some shenanigans, orcs and humans fight. It’s a wafer thin plot that is thrust forward by some of the most vacuous characters committed to screen. Characters whose names feel like a random word generator spat them out and applied them to each of the equally randomly generated beings that make up the roster of heroes and villains.

Difficult to pronounce names are not a new thing to fantasy films, nor is the fact that casts are usually compiled of B-list actors. This is one of Warcraft’s major missteps – almost everyone here is so poorly miscast in their roles, with most never feeling like they genuinely belong in the role they’ve found themselves cast in. As the female runt orc Garona, Paula Patton almost feels like she’s stumbled onto the set of Who’s Line Is It Anyway? and ended up with the orc costume from the costume box. Her origin and story feels like it should have weight, but Patton is given little to work with and instead becomes a bland being.

The usually great Ben Foster portrays wizard Medivh, guardian of the humans. Where wizards have been portrayed in other films by wise looking men such as Ian McKellan or Michael Gambon, Ben Foster appears as if he’s ashamed to be in this role. He delivers his dialogue with an air of ‘I can’t believe I’m saying this stuff’. You almost wish that he had hammed it up, just to bring some level of excitement to the role, instead he mopes around the set as if someone woke him from an afternoon nap.

Yet, none are more miscast than Ben Schnetzer as young magician Khadgar. For most of the film I thought his character’s name was Catdoor – but, that’s mostly due to the dialogue being so incomprehensible. Schnetzer was great in Pride, but he is simply too youthful and feels too modern for the role of a magician in training, and in turn feels completely out of place within this fantastical world.

If there is someone who does bring a level of gravitas to their role, it is Toby Kebbell as Durotan. Embodying a completely CGI creature is surely a difficult thing to do, but Kebbell fills Durotan with a spirit that feels sorely lacking from every other character on screen. ILM are to also be commended for creating stunning looking orcs which are refreshing creations to look at given the frequent shades-of-brown monsters we’ve seen of late in these sorts of blockbusters. The combination of Kebbell’s performance and ILM’s skills creates a character who feels like should have been the central focus of the film. After all, Durotan’s relationship with his wife Draka (Anna Galvin) and their child is an interesting one that would have given the film a greater emotional throughline compared to the bland human characters. Instead, he’s shifted aside for the film to focus on the human characters.

Visually, Warcraft looks like every dollar that was spent has been put to great use. Yet, what use is great computer graphics if there’s nothing of substance to carry the film along? The battle scenes look technically stunning, but after years of technically stunning films, it’s becoming more difficult to be willingly hoodwinked into believing that you’re not just seeing millions of dollars computer graphics working overtime on screen. Sure, grand vistas of mountains and valleys seem impressive, but unfortunately for films like Warcraft, it’s hard to top the wonder that Peter Jackson delivered all those years ago with Lord of the Rings. Wonder cannot be created through trickery alone.

If there’s one thing that frustrates me the most about this adaptation of a video game, it’s that it’s an adaptation of a game that has had such a profound effect on many people’s lives. The communal nature of a group of strangers spending hours together to conquer a difficult raid is something that needs to be acknowledged. Yes, there are difficulties with the addictions of online gaming, that’s a fact. However, there’s no denying the power and joy of a community of people getting together to play a common interest. People have gotten married after meeting in World of Warcraft. I know of someone who moved from Canada to Western Australia to be in the same time zone as his raid buddies.

So, it’s then frustrating that Warcraft lacks any sense of community within the world itself. There’s no sense that these characters continue to live their life after they’ve left the screen. Where Hobbiton felt like a genuine place that existed, where people ran farms and lived their lives, Azeroth feels like each scene is just a loading screen for another scene. I’m not suggesting that this film needed to be a group of people raiding a cave full of trolls and cheering, rather that there needed to feel like a sense of reality within the world presented on screen. After all, for some people World of Warcraft is a second life for some people and to them, the computer animated world within the game is real. Is it too much to ask for the world within this film to feel real?

No amount of technical brilliance can create reality, that needs to come from the script and the acting. There is an attempt here and there at creating some levity, yet, these jokes fall flat and feel supremely out of character for those who make the jokes. (Although, maybe if there was a ‘Leeroy Jenkins’ style moment, the film would have had some levity that would have worked.) There doesn’t need to be a love for the source material, there simply needs to be the desire and ability to tell a story as best as humanly possible.

I wish there was something that I could recommend within this film, but there isn’t. Yes, the orcs are superbly designed and realised, but when we live in a world where stunning looking computer generated creations appear in every second film, it hardly feels like something worth praising. The battles are generic, the plot is bland, the characters are forgettable. If anything, the film does provide two of the most cringe-worthy moments of 2016 – a fight with a giant made out of clay, and the final shot of the film – yet, cringe-worthy moments are no reason to see this film in theatres. If, for some reason, you do decide to drop your hard earned money on this film, don’t see it in 3D, there is nothing that the 3D format adds to the film other than a headache. Avoid.