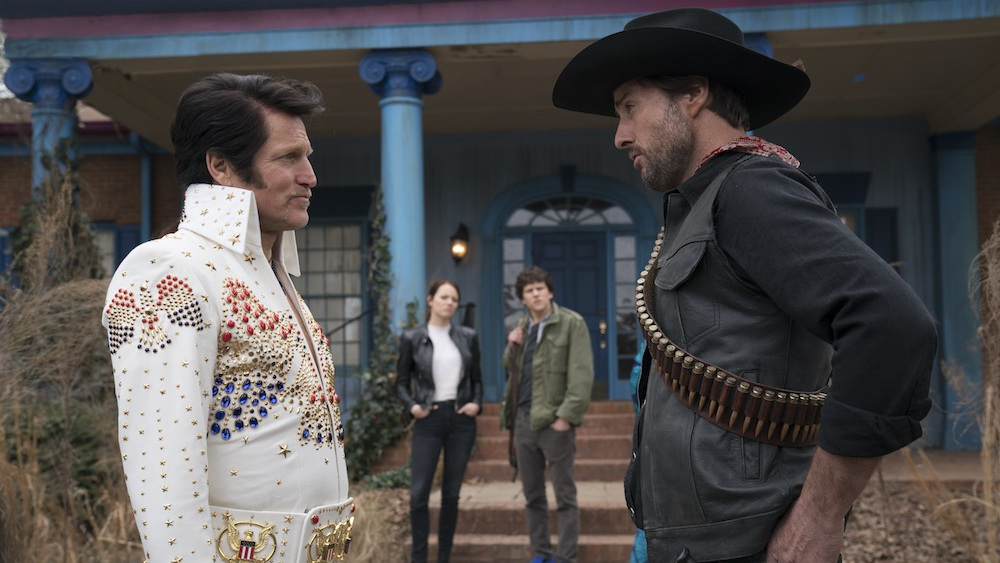 Directed by Ruben Fleischer and written by Rhett Reese and Paul Wernick, Zombieland: Double Tap stars Woody Harrelson, Jesse Eisenberg, Abigail Breslin, and Emma Stone, the same cast and crew from the first Zombieland 10 years ago, as well as newcomers Zoey Deutch and Rosario Dawson. It’s still the zombie post-apocalypse, but a new type of zombie and the passage of time is starting to affect and challenge the zombie-killing family of Tallahassee (Harrelson), Columbus (Eisenberg), Wichita (Stone) and Little Rock (Breslin) in ways no one can expect.

Typically, any sequel to a well-liked or even beloved comedy that takes over five to ten years to make is going to be really bad. Zoolander 2, Blues Brothers 2000, Caddyshack II, Another 48 Hrs. Dumb and Dumber To, Beverly Hills Cop III, the list goes on, so I was holding my breath for a Zombieland 2. 10 years is a massive gap between sequels, and especially for one I really enjoyed and still go back to as perhaps one of the heights of the re-energised zombie genre from the late-2000s-early-2010s.

Thankfully I can say that Zombieland: Double Tap is a pleasant and enjoyable ride into familiar territory and great characters that was worth the wait in many ways. I love seeing Tallahassee, Columbus, Wichita, and Little Rock together again, cracking wise and giving each other good-natured digs at their personalities and the effects of the time that has passed. It isn’t long before the group is split up, causing a road trip to Graceland of all places to ensure their little families safety, and while I would have wanted more of all four together, this plot gave us great opportunities to meet new people, see new places, and contrast the new with the familiar rhythms and relationships between the returning characters. It’s not brand new material, but it still feels good.

Everyone is turning in top-notch comedic performances, no matter how long it’s been between movies, and the additions of Zoey Deutch and Rosario Dawson, as well as brief but highly memorable appearances from Luke Wilson and Thomas Middleditch, are welcome and surprising expansions of just how many humans are still alive in Zombieland. One thankful surprise for the returns of Harrelson, Eisenberg, Breslin, and Stone is not only how old Breslin has gotten seeing as she’s my age now (oh god, am I old?), nor is it how easily Harrelson slips back into, borrowing an Honest Trailer joke, playing the personification of the state of Florida, but how much Emma Stone is in here. She’s now an Oscar-winner and has since appeared in awards contenders like Battle of the Sexes and The Favourite, so it was delirious delight to have her fully willing and committed to being back in Zombieland with her co-stars.

Sure, Double Tap has a few great new things around the corner and a couple of genuine surprises, but it is most of the same thing as the first movie. There’s a certain destination to reach, encountering many zombies along the way, learning to be a family, a big battle against a horde of the undead in the end, it’s a formula that works but is a formula nonetheless. Some of the jokes don’t work, there isn’t as many of the massive surprises that set Zombieland apart from the pack in 2009, and moments of foreshadowing are either plainly obvious or don’t go anywhere in particular.

In the end, I had a good time with Zombieland: Double Tap. Ruben Fleischer approaches the material as a more confident director, throwing in some fantastic camerawork with Chung Chung-hoon, and Rhett Resse, Paul Wernick, and new writer Dave Callaham craft another funny script in the same style and tone as the first film, so everything just feels good and comfortable. Maybe you’re looking for more in a comedy sequel, but thanks to the winning performances and perhaps one of the best mid-credits scene ever, Zombieland: Double Tap was worth the wait.

What Goes Around – Extremely Low Budget, but Effective 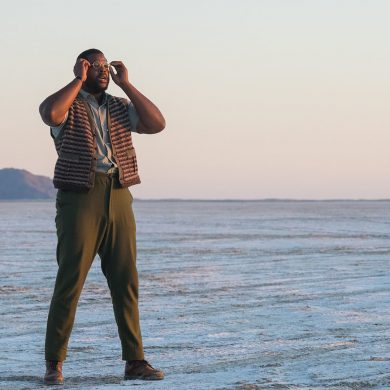