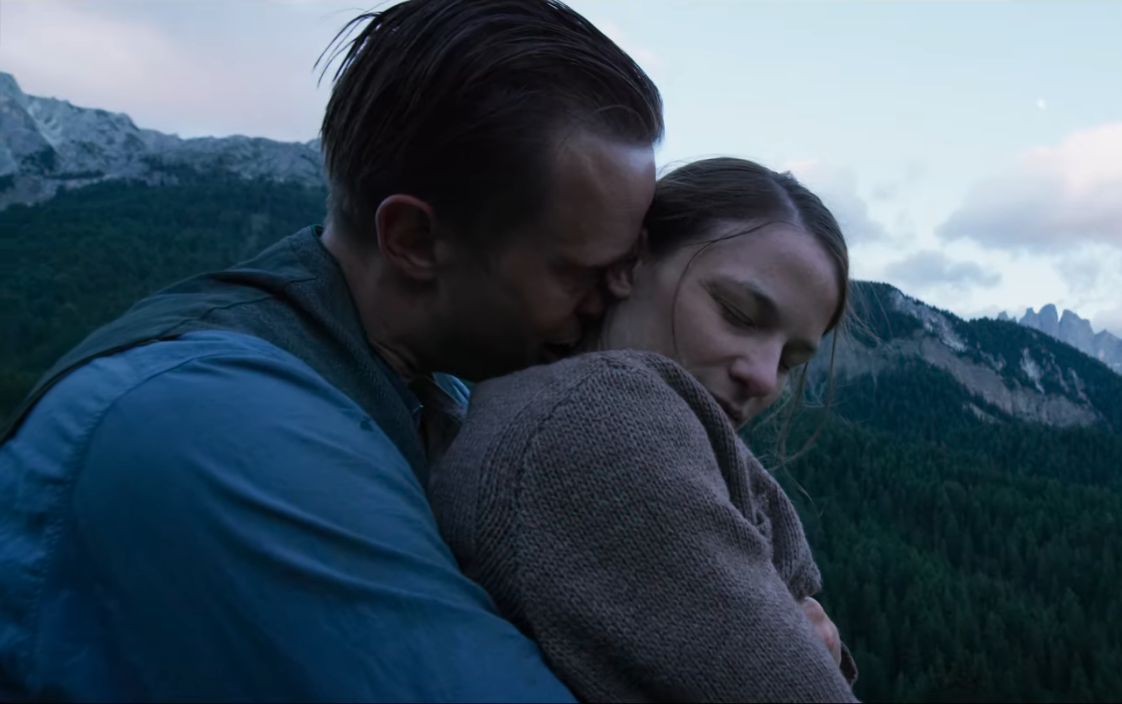 Based on real events, the refusal by Austrian farmer, Franz Jägerstätter (August Diehl), to pledge allegiance to Hitler amidst trying times for Germany unfurls a world of hardship for the humble countryman. This punishment extends not only to Franz, a conscientious objector who is sent to prison for his defiance, but his wife Fani (a powerhouse performance from Valerie Pachner), and their three daughters who reside on the picturesque Austrian countryside.

At three hours in length, Malick constructs A Hidden Life as a slow-burning piece of artistic expression; a deft rumination on conflict, the greatest casualty of war being the loss of freedom, that never presents the battlefield. Malick allows the film’s lengthy duration to denote the relentless cruelty suffered by those caught on the opposing end of German forces. Suffice to say, Malick is a director who invests generous servings of time in establishing mood through metaphor; achieving a deeper meaning within every scene he crafts.

Abound in Alps-like views and lands of untouched greenery, you’d be hard-pressed to discover Austria was involved in war judging by its breathtaking beauty. Roaming conversation and the occasional visit from German soldiers offer what little exposure the people of St. Radegund, a small alpine village, have with war. The vast mountain ranges shielding citizens from the atrocities occurring on the battlefield; a luxury the villagers are determined to uphold.

Told with The Tree of Life auteurs signature sense of naturalism, A Hidden Life captures the grace of freedom amidst wartime through the presence, and absence, of nature. The lush countryside of the Austrian mountainside, abundant in tranquil waterfalls and scenic valleys which the Jägerstätter family once frolicked in, transforms into a harrowing reminder for Franz of what his righteous defiance stands for him to lose. We watch throughout the film as Franz’s view of nature recedes from illuminated sky’s to a small window standing alone in a dark prison cell. Malick instils upon the film an evocative sense of mise en scene which allows production design to radiate thematic weight as effectively as the dialogue.

Townsfolk who once looked at Fani and her children with kind eyes now stare at them in disgust. Their maligning, brought about by Franz’s opposition to Nazism, expresses how pervasively fear spreads throughout a community under the stranglehold of tyranny. The news of Franz’s defiance, risking unwarranted attention from German officials, springs forth hysteria into a community that would otherwise bend to the will of Hitler should it maintain their peaceful way of living. However appropriate it is, or isn’t, to sympathise with these townspeople is a question that begs deep contemplation. That said, the non-judgemental manner A Hidden Life takes to exploring the motivations of these characters denounces the harsh manner governments, and politicians, operate under duress.

The Thin Red Line director allows the gentle sounds of narration, told by husband and wife reading aloud letters that express their undying love for one another, to capture the extent to which emotional pain is felt during war. Malick goes as far to dial down scenes involving physical torture to allow the viewer time to witness the psychological breakdown of Franz and Fani as a result of their forced separation. This is most evident when Malick obscures the audience’s view of Franz being beaten in prison, with the camera impeccably shifting from third to first-person perspectives.

Wilfully choppy-edits occur mid dialogue to heighten the emotional intensity of scenes; drawing out wild and vivid moments which play to the irrationality of the time. The camera also shoots from an upward-looking perspective, partially concealing faces and bodies, as though Malick were observing the film from the eyes of a child. While some may perceive Malick’s generous application of filmmaking techniques as pretentious (not this reviewer), it is hard to deny the filmmaker’s ability to convey a heavy sense of atmosphere.

‘To cause others harm is a life not worth living,’ remarks Franz – a loving father and man-of-faith who has spent his whole life cultivating the land – during one of his routine interrogations. Efforts to persuade Franz to enlist, both through means of force and denigration, prove futile, with the humble farmer sticking to his righteous path. Theology and philosophy round out the thick of heavy themes featured in A Hidden Life, with Malick empowering his work to consider extremism from both ends of the spectrum. The grand effect contrasting Franz’s devout faith and desire to do-no-harm with the authoritarian influence of Nazism.

Malick ponders what credentials he, an artist who has never experienced war first-hand, has concerning being able to share stories of war. The result, offering a thought-provoking and introspective take on the material, allows A Hidden Life to challenge modern interpretations of war in filmmaking and the ethicality behind its depiction. This level of self-awareness becomes all the more striking considering the current rise in popularity of films about war, with there currently being two tonally opposite war-films, Jojo Rabbit, a controversial feel-good WWII comedy, and 1917, a big-budgeted war-epic, currently out in cinemas.

South Korean director Bong Joon-ho’s recent remarks regarding western audiences lack of willingness to watch foreign films is somewhat present with A Hidden Life; an arthouse war-drama featuring a cast of European actors who speak only in English (at least this is the case for the leading players). Considering the films protracted length and relatively unknown cast, it is hard to believe the reason for this would be A Hidden Life’s desire to appeal to mainstream western audiences. Whatever the case, it proves an undermining move by Malick to cast European actors and have them re-enact a story about the Second World War in English.

With A Hidden Life, Malick demonstrates a profound desire to give a voice to those silenced under hellish regimes. Their brave sacrifices have not fallen upon deaf ears. While unlikely to be everyone’s cup of tea, those prepared to endure Malick’s purpose-driven artistry are sure to be captivated by the auteur director’s penchant for rich filmmaking.