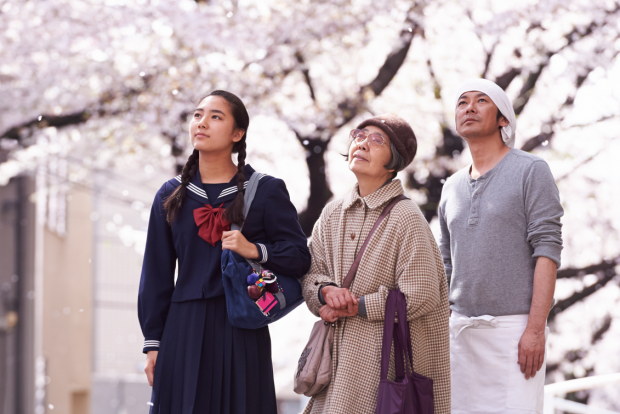 Films are just like food. They nourish, they enrich, they provide an energy you can’t find anywhere else. Just like food, films follow a set of ingredients – you have a script, you add a director, you fold in a cast, and after a few weeks of filming and editing, a film exists. Each film may follow the same recipe, but to elevate that film above its core elements, heart and soul needs to be added. A store bought lasagne has the core elements of a lasagne, but simply cannot compare to the care and love put into a homemade lasagne which has had hours of care and love put into its creation.

An is a film that follows a familiar recipe – an elderly lady (Tokue – Kirin Kiri) teaches a young wayward soul how to find his place in the world – yet elevates this time worn theme with a heavy dose of humanity and love. Through the creation of doroyuki – a sweet bean paste created to go with pancakes – Sentarô (Masatoshi Nagase) learns how to realign his path in life. On the outskirts of this core store is Wakana (Kyara Uchida) – a regular patron of the doroyuki café who seeks refuge there from the difficult home and school life that makes up her life.

What is so beautifully sweet within An is the core performance of Tokue. Kirin Kiri feels like someone lifted directly from a Hayao Miyazaki film. Her wide eyes look at the world with wonder. She is filled with joy at being able to create delicious tasting food and seeing the reactions of customers who eat it. Her affection and care for doing a job properly helps trump the theme of the film – that of being crushed by the ignorance of others.

The trio of characters – Tokue, Sentarô and Wakana – all have difficulties in their lives that they have to find ways to overcome. What brings their stories together is the desire to overcome the injustices that the world around them has enforced on their lives. It’s here that An rises above being a simple tale about one person finding out how to make a sweetcake. Without going into spoilers, there are some truly heartbreaking second and third act revelations that help ground the film even more. Admittedly, my lack of knowledge regarding some aspects of Japanese history made these revelations even more surprising – and in turn, has encouraged some very enlightening research into Japanese history.

An is a sweet film that encourages the viewer to reassess how they move through their life and interact with other people. Like any meal, An’s cinematic ingredients follow the a basic cinematic recipe, but the heart and soul poured into the film by writer/director Naomi Kawase elevate this above the basic fare it could have been. With a pinch of a Miyazaki film, and a dash of Haruki Murakami novel, An is a sweet film that moves just as much as it enriches the soul.